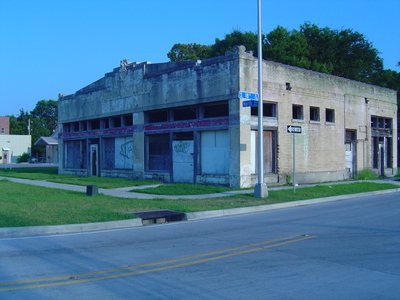 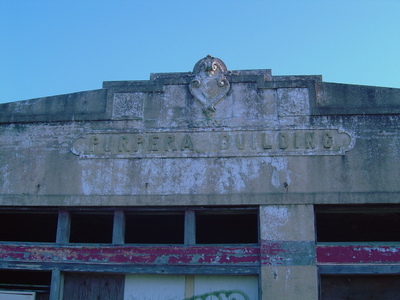 Wrong. All I can tell you is that the unusual (to me) Purpera name is also the name of a road in Gonzales, LA, a surname that people around these parts still have, and also the name of something botanical. 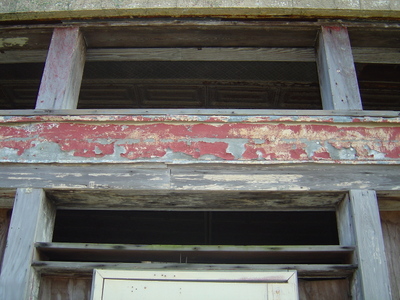 After spying the perfectly weathered wood and possibly intact tin ceilings in this place, I realize that I have to start a new business where I sell castoffs from down here to dopes with money to burn in NYC and elsewhere looking for "authentic" decor for their new bar and/or restaurant.

No matter that the Purpera Building didn't offer any exciting interior views. The unoccupied Romano's Pack & Save next door certainly did. 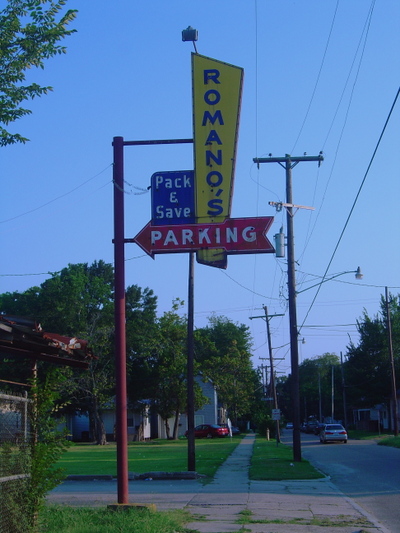 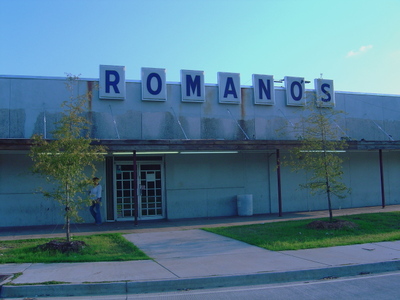 (That lady is there because she thought they were open.) WHAT?!?!?! To be fair, I have to tell you that there was a hand-lettered sign on the door stating Closed for Renovations. But...but...don't renovations take a while to happen? They left MILK! And if you look to the lower left of the milk, it looks like they might have also left eggs! Once again, I have oh, so many questions.

UPDATE: Romano's has since boarded up their doors...I'm not so sure if they're ever returning from those renovations. But you never know around here.

Then I had to hop over to the third property in this row to check out the sign advertising a "Promise Land" eatery. There was a small, shut-down, drive-through fast-food stand in a lot that had a Christian store on the far end, and I took a photo of their blown-out drive through menu. As I rounded the corner, I got questioned.

"Excuse me--What are you doing?" two ladies hanging out a few hundred feet away in a car were addressing me.

"I'm an art student," I said, glad I'd already had an explanation prepared.

"Well, we're the owners of this property."

I didn't necessarily believe them; I thought maybe they just didn't like the looks of me poking around. When the lady came over to discuss the matter further, and I saw that the ministries name on her T-shirt matched the name on the sign we were standing below, I knew she was legit.

"Where do you go to school?"

"LSU," I said--truthfully, if "LSU" stands for "Life Studies University."

Explanation enough. She told me everything. She was the assistant pastor for such and such ministries. They'd just purchased the property, and she told me how much it had cost, and what their plans for it were. I learned that every time thugs broke the windows in Promise Land eatery, which was fairly regularly, it cost $4K to replace them. I heard about their daycare center, I heard about what their other properties had cost to purchase, I heard how much the sign had cost, and I heard mention of tent revivals that they hold on another lot. I wanted to ask her about the tent revivals, but I would need a cloak of invisibility in order to attend one. (I don't wish to be recruited, just to observe.) She chatted long enough to make me grateful I had never attended one of her services, although she was a very nice lady indeed. She asked my name as we parted and I learned she was Reverend so-and-so. I like that my first confrontation on an abandoned site ended in friendly introductions. Southern style! 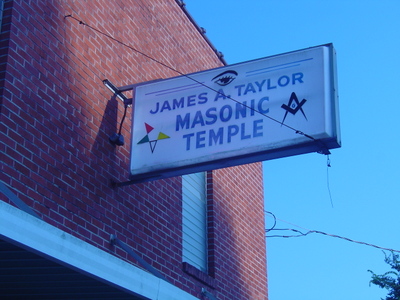 And this is or was the local Masonic Temple. Now you know why James Taylor had so much success. Those Masons secretly run everything. 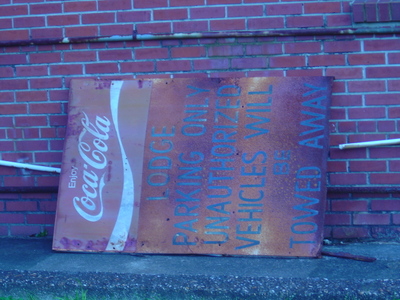 I would place this site in the top 3 of my feeling the most conspicuous taking photos. I was definitely being watched by the people in the yard across the street, which had an ancient sign advertising rooms for rent hanging out from the building. 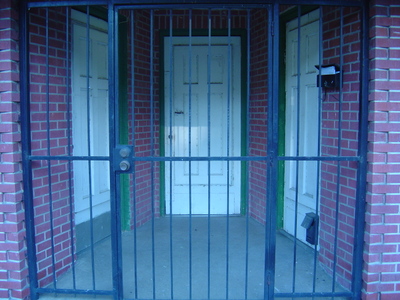 The door on the left leads to a barber shop; I can't tell if it's sometimes open or permanently closed (what else is new?). The door on the right looks like it may be a personal residence, as there was a window ajar with a shade drawn, and there is mail in the box. Door Number Two looks like it leads into the temple proper. And what lies beyond that door...who the f knows.

Wait...these guys knew. Maybe one or two of 'em are even still alive on some porch somewhere today. 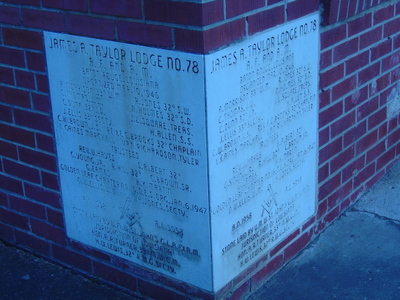 Then there's this joint. 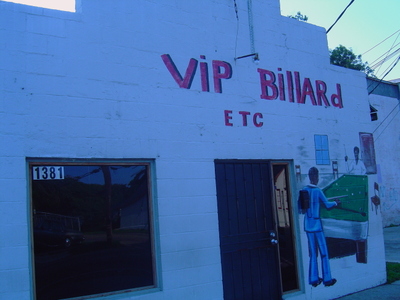 Come on, guys. Not even getting into the spelling, the mixing of caps and lowercase, and the abilities of the mural artist. "ETC"? I am so sketched out by that. 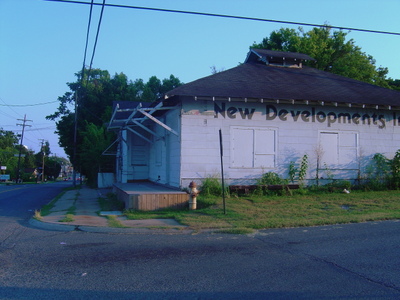 As you can guess by its presence on this blog, this establishment's developments are no longer new, nor are they developing. Although one more recent development here was "breaking and entering." 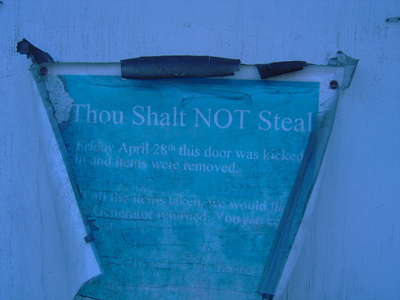 The sign says that all they really want back is the generator and to contact Reverend such and such. But if you look at the flimsy lock from a New Yorker's perspective, it's a joke. They're just inviting more break-ins. 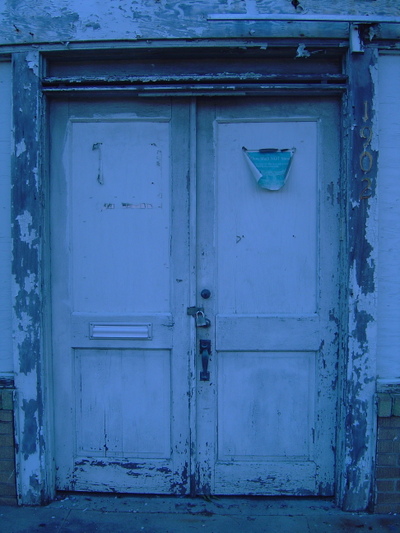 But I guess someone who thinks a thief would be swayed by a "Thou Shalt Not Steal" sign is pretty naive, anyway. 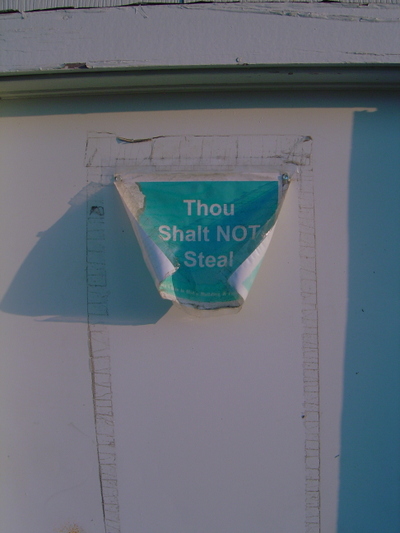 I've often had to endure monologues of people's lives/random facts when I meet them out in the field. You have to perfect the slow backaway from these people.

Big Daddy, don't tell the Free Masons I was talking about them!

Dude are most of the places nearby where you live abandoned? Because I can see how that could be depressing!!!!

Also, I think I'd rather bump in to a crackhead than a reverend talking my ear off. That would make me more anxious.

Lastly, I love the picture of the doors (with the no stealing sign on it). You could blow that up and frame it. It's very spooky in a good way.

The manicure/cheesy hair salon eyeball on the Mason's sign is hilarious. It's like they went to the Korner Signery:

clerk: "Okay, so that takes care of the lettering. May I interest you in any pictures on the sign? You can take a look through this clip art book. If you get two your third graphic is half price."

clerk: "That one looks mysterious and evil to me."

I would love to find out what happened to Romano's. They made the best (and very cheap) pork chop sandwiches.

If you are curious about what a lot of the old building were in their day, try tracking down a local senior citizen. I know I've heard a thousand stories about what all the downtown buildings were years ago from my grandmother. Apparently the new Boudreaux & Thibodeaux's bar used to be the first Piccadilly (which started here in Baton Rouge). Happy hunting!

The masonic lodge is actually still open and very active. This is a link to more information http://jamesataylor78.org/

pupera bldg. was once a eletrolux vacumn cleaner sales and service business. the other part of the bldg. was a barroom. i know becausw it belonged to my grandfather . vince purpera.

I am new to the internet world and specially in the world of blogging your blog is really helpful. Thanks....!

Large buildings seem to be works not made by men, by its vastness and designs. But these buildings is indicative of the potential that man can offer.

I documented the Purpera building this weekend by taking several pictures (6-14-14). I like your pictures, however, you sound very condesending. I do not like your blog. You sound as if your heart is in the wrong place for what you do.