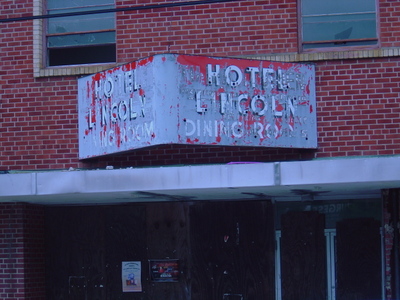 Even pre-Katrina, there were some areas of N'Orleans you just didn't go wandering around.

During Jim Crow, traveling black entertainers were faced with a lot of difficulties, not only in the South, but in the North as well. Public accomodations were not open to them (restaurants, hotels, motels, restrooms, etc.) Especially in the South, they had to endure the open insults by bigots and being referred to as "niggers," "boy," or "gal." Martha Reeves said that in one Southern town, the Motown Review was mistaken for freedom riders, ordered back on their bus and shot at.

It was a hard life traveling in cars from city to city, singing hard and often times getting cheated out of the money.

Do you think that's why young performers today don't have the talent that their predessors had? Things are too easy for them and they don't have the training the great singers got, in church, and having all that heartache in their lives.

Sad to see not more progress in New Orleans. It's a real opportunity for some the government to take the iniative for restoring wetlands and creative planning for a new city.

This was open just a few years ago, and was at that time home to a lot of Vietnamese immigrants who were just getting on their feet here. There was a group of buildings across the street that have been demolished, too. It was one of those things where you drive by one day and it's open and the next day half the street is gone and it seems abandoned.

A friend of mine has looked into buying the building and remodeling the rooms into apartments or condos. I don't know if he got anywhere with it.

Lee, thanks for the info! Fascinating. If your friend has access I'd (obviously) love to see inside.

Yeah the "Lincoln" businesses were all black-owned establishments since black folks weren't allowed in white folks's theaters, barber shops, or restaurants back then.

The Hotel Lincoln was always the Hotel Lincoln. It was built in the 50s and was the first all-black hotel in BR. It and another hotel for the black community (built later and very recently shut down due to prostitution problems) were "bombed" by a passing car driven by conspiring whites who were fearful of change. The Gulf Coast gas station on Government (who's sign is pictured on this blog) is referenced as having witnesses who saw the car drive away. The Hotel Lincoln housed civil rights activists for a while which included people as far away as Canada.

The ground floor is split into three sections, one part having been a dining area and another home to various businesses (including the local Democratic Party HQ which I think now is only a few blocks down). In the 90s, the Hotel was bought by a BR Vietnamese Catholic parish and used to as a boys home/school. The building is featured in a Southern University film because of it's role as a fixture in the black community during the BR civil rights movement, and especially during the bus boycott days which later inspired Martin Luther King Jr. It would be interesting if he actually stayed there during his visit.

In my opinion, this building a big deal for Baton Rouge and a major historic landmark. Unfortunately, it's not getting any younger and is housing homeless drifters. I've had problems getting in direct contact with the owner, who presumably knows the history quite well and may be hoping to restore it. Such a task I'm prepared to do and have received positive feedback from those living in the neighborhood.

Anyone reading up on this building should also check out the Kress building downtown which is being renovated with the promise to preserve its history. It, too, had its place in the local civil rights movement.

If anyone has any more info on this building or knows of anyone who grew up in the area within the past 50-60 years, feel free to contact me: jeff@jurai.net.

By the way, I wouldn't recommend arbitrarily going in there. The owner is a long-time power lawyer in the area and probably wouldn't appreciate trespassing, despite tolerating the occasional inhabitant.

So does this guy: http://www.uer.ca/forum_showthread.asp?fid=3&threadid=87380

I live near mid city and have curious about this building for a while. Any new information on it? Are there still plans for renovation?