I just got back from a road trip from Philadelphia down through the South, and spotted a lot of abandonment along the way. The real pay dirt was in Jackson, Mississippi, a capital city with a downtown as eerily abandoned as Baton Rouge's. Anyone ever see the early '70s movie The Omega Man, starring Charlton Heston? I recommend it during this fine Halloween season, and driving through empty Jackson was like Heston driving through empty L.A. in that movie.

But first, how about a nice burned-out motel? [Click to enlarge] 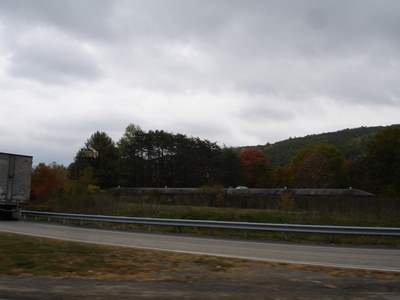 That motel was somewhere in Virginia or West Virginia. This was nearby in a suffocatingly small, creepy little town. 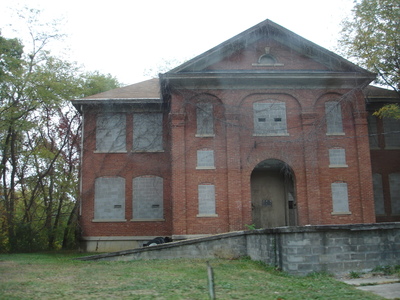 In that same town were living setups such as this. 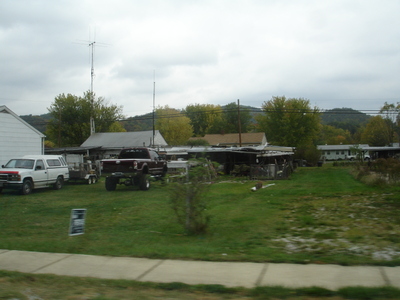 Moving on, as anyone smart who could probably would from this town, we found the abandoned Tanglewood Child Development Center in Memphis on Elvis Presley Boulevard. Any time you add rusty children's playground equipment to an abandoned building, it's guaranteed extra creepiness. 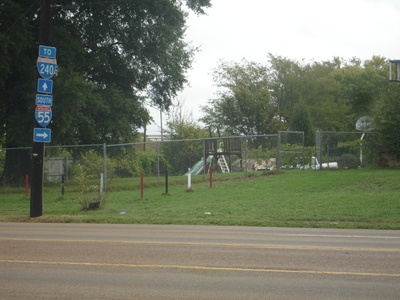 The other view approaching this building from Graceland was spookier since the other sign was in even worse shape, but I didn't get a pic. Skipping ahead to the last day of our trip, we have the best find of all, in Jackson, Mississippi: the abandoned Sun-n-Sand Motor Hotel (or as some might call it, "Motel"). I just mistyped it Sun-n-Sad, which is more appropriate, since there was no sand in sight. 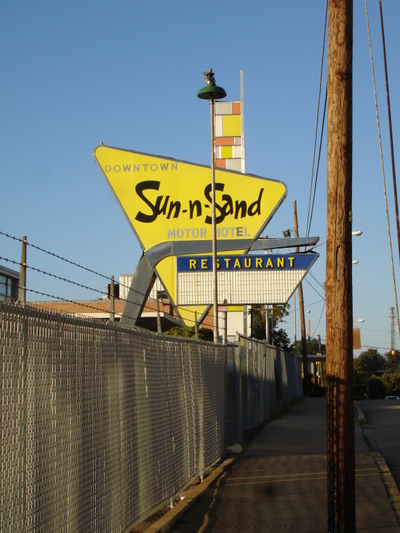 I bet this place had rad decor. Inside you can see the pink ladies' and gents' room doors and wood paneling (probably faux wood, I'm thinking). 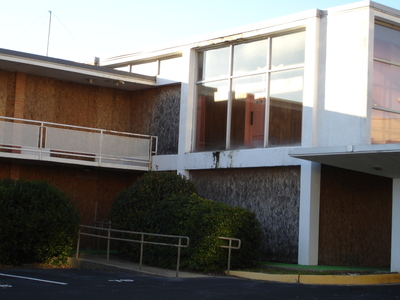 Believe it or not, this place is directly across the street from official state office buildings. 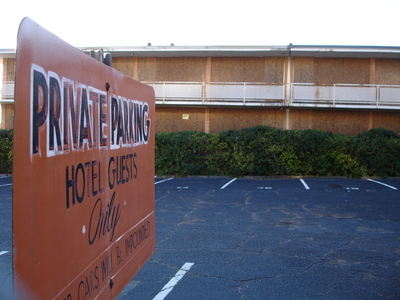 Check out that pink area above the lobby. What would this be at a motel? Not penthouse suites? Here's the side view of what turned out to be just building one of this motel. 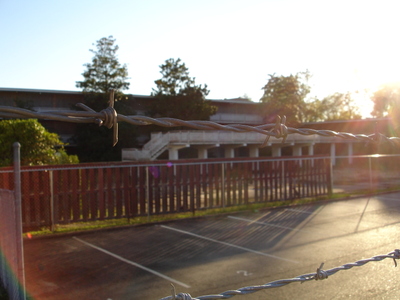 Apparently, at some more populated time than now, Jackson used to get a lot of travelers? Because here is building number two, which was much more accessible for exploration. 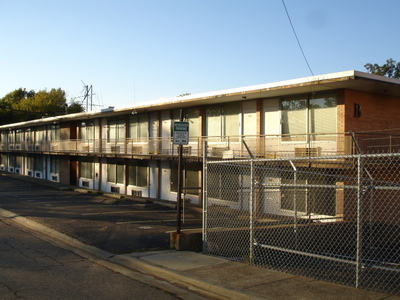 But first you had to step over this bird skeleton! 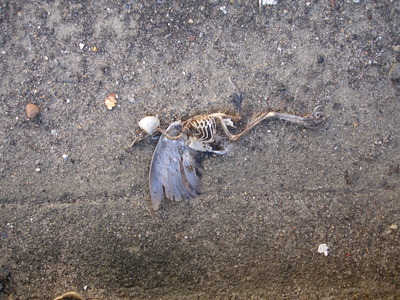 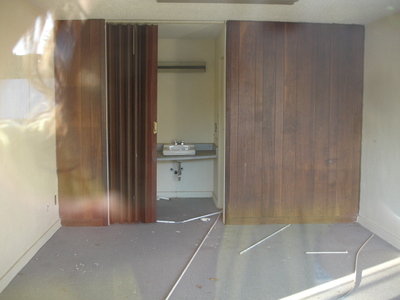 Bottle and can evidence inside made it seem like we could get in if we tried the right door, probably around back somewhere. But we felt out of our league in this desolate city and wanted to scram. 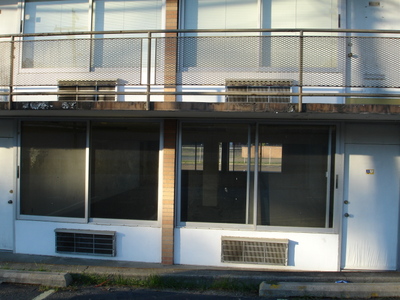 This seems to be some sort of public area--conference room? Lounge? 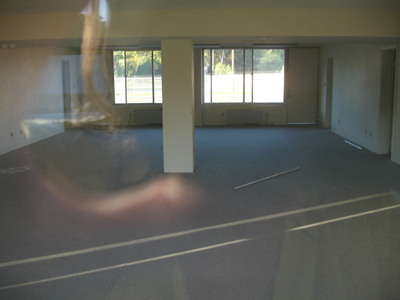 And then it was time to get out of Dodge before the zombies arrived. 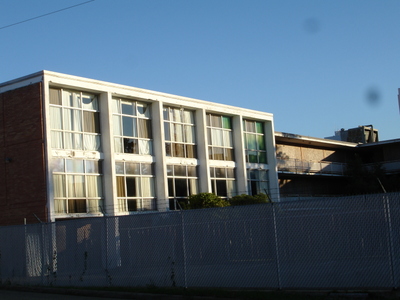 In 1995, for our 1 year anniversary, I planned a trip to Jackson MS. The deal is that one of us plans it out and the other has no idea. Based on a OK recommendation from a Let's Go travel guide, I planned our stay in Jackson to include the Sun and Sand Motel.

When we got there, we were impressed with the real 50's kitch, and the proximity to downtown, but my wife gave me long looks as we approached the lobby due to the overall shabbiness.

We got our room and key, and were headed back out to the car when a truck driver stopped us and demanded, "What are you doing here?" "Uhhhh.." He proceded to tell us to look around for bullet holes in all the rooms from all the drug deals gone bad on the other side of the fence.

I went back to the lobby to check back out, telling the elderly gentleman there only "that we made a mistake." He asked about the specific features of the room, and I only gave the reply that again, we made a mistake. At that point, and I can still hear his Foghorn Leghorn voice, he said, "Why, we have had people stay here from the government on down."

After we left and the tension subsided, we replayed his last comment over and over. Now, we have a lot of government employees in our family, so it is nice for the gentleman working there to have such a high opinion of government workers, but we would hardly start there when describing the peak of celebrity or class.

We actually had a soft spot for the Sun and Sand, and on subsequent trips to Jackson we would be sure to drive by and take a look, my wife in particular looking for the starburst clock in the lobby. There was a rennovation in the late 90's, it did not in our eyes improve the motel, because it took away probably half of the 50's mod paraphenalia, which we like.

Thanks for one last trip to the Sun and Sand. And thanks for your ABR web site. It is a bit sad to have so much building going on in surrounding parishes, and so much empty space and unused property in what seems like a perfectly serviceable part of town. Thanks for finding some humor it in, that helps. And if some people don't like it, remember what Grandma Sanders says, "F 'em if they can't take a joke."

Jay,
That might be my favorite ABR comment ever! Thank you for the back story on Sun n Sad/Sand! So cool to have the curtain pulled slightly away and have a little more knowledge about the place. If that's what it looked like after it was renovated, I would've loved to have seen it before. What a shame.
And yeah--f the haters!
Hope to hear from you again.

I think the bird skeleton detail really says it all about the fun of Jackson MS. My X went to higschool there and whenever I would go for a visit from new orleans all we would ever do was go to shoney's, krogers, and the park - the end. But his very fundamentalist mom claimed to have seen a big black alien spaceship there... which is awesome. :)

The old man wasn't kidding and he wasn't talking about state workers, either. This was the home away from home for many Mississippi legislators for many years. I recently saw a newspaper article in which some legislators lamented the closing of the motel; it also mentioned that John Grisham used to stay there regularly.
The motel was built by Dumas Milner who also owned a car dealership in Jackson as well as another Sun'n'Sand on the Gulf Coast. He purchased the Edwards Hotel and remodeled it for the worse and called it the King Edward. It had been the residence for many state legislators before it was closed due to racism in 1967 and remained abandoned for decades, but is now being renovated.
The parking lot of the Sun'n'Sand is now being used to park state-owned vehicles.

The sun should have reached its sunspot minimum last fall, but this spring when the number of sunspots should have been on the rise, they were still largely absent. Some sunspots returned in June and July, but have since disappeared.

Thanks for this post,,,GOD Speed!