My first expedition with co-urban explorer Joshua took us across the Mississippi and south, to a land dominated by old sugar cane fields and crawfish shacks. We stopped at an industrial site on the site of the former Cinclare Plantation, a onetime sugar plantation "company town." 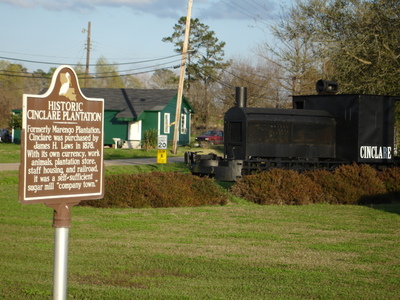 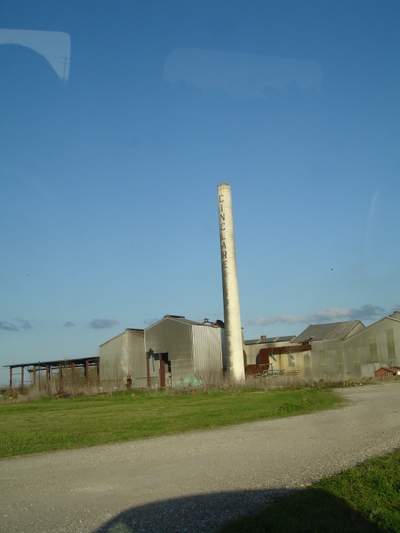 Innocent as it looks, it was to become the site of the scariest ABR incident to date. Although admittedly I am a complete pansy as explorers go.

First we found this super ye olden tymey tractor. Like, this tractor should probably be apologizing for the slavery it witnessed. 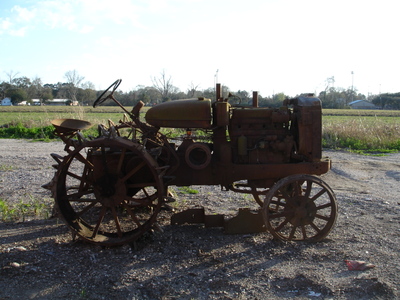 It sounded like there was someone in this brick building here, which would explain the much more current vehicle parked on the other side of it. 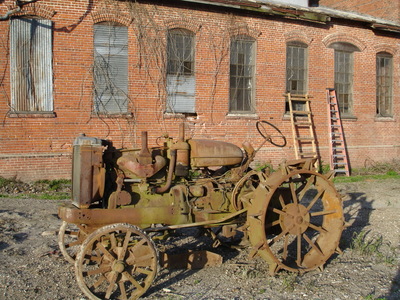 Then we got out of the car at the more industrial looking area. Two thoughts overwhelmed me: People in Brooklyn would pay so much to have these oversized gears in their loft spaces, and a metal band should really shoot a video here immediately. 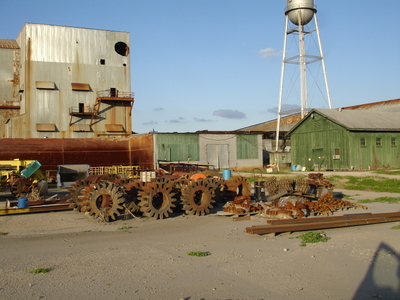 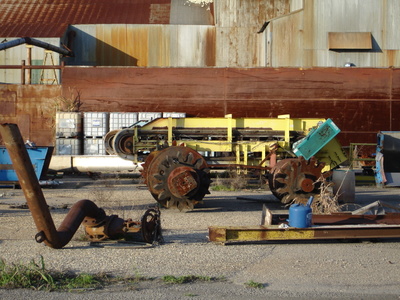 They would also totally kill for this structure if it were in Brooklyn. 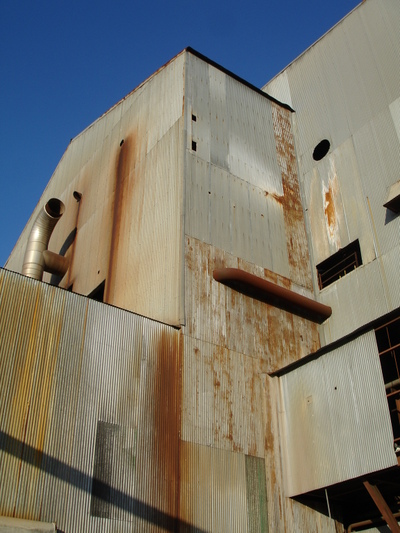 We had only just begun looking around. We passed giant molasses vats, and I saw these open storage closets and thought, how trusting ARE they here? Who left all this equipment lying around? 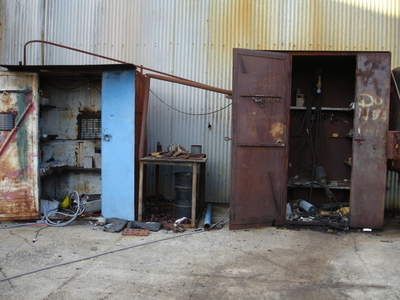 The area we were in dead ended in the building depicted in the second photo in this post. I peered in a window, for one brief moment enjoying the stripes of afternoon sun throughout the very Flashdance-like industrial setting inside.

And then I saw the man.

A round man was just sitting on stool in there, along with the world's worst watchdog, who was not yet barking.

No matter, becuase I had already sprinted a good 100 feet way by the time he got the garage-style door open. Joshua had politely waited like the Southern gentleman he is to explain that we were just looking around, even though I'd hissed "Somebody's in there!" to him, which to me was the same as saying "Like, let's get outta here!" a la Shaggy in Scooby- Doo.

The guy, who was apparently employed to hang out in an abandoned sugar factory all day, was very nice, or so it sounded from several hundred feet away. Then it was time to cut our visit short, sadly. But we hope to return to sugar cane country again.

There was recently a fire at Cinclare (of suspicious origin). I'm sure the man was there to monitor for firebugs.

Delurking to say you're right about those sugar cogs, though some of us "normal" folks have 'em, too. I'm in Bklyn (not a loft-dweller), and we brought back from Festival Acadiens a cypress dye used to make those things, thanks to the nice folks at the heritage museum.

Speaking of which, you should think of heading up to Lafayette for the festival in September; everyone can use a little Cajun time. Plus, you know, the Avery Island tour, which we never seem to actually do.

I always hate encountering people when I'm in the woods or other job sites. You never know the reaction of these random people. Some are cool and others...are not. So I have my three step process. 1. Act nonchalent as if you are not doing anything wrong even if potentially trespassing. 2. If #1 fails, then become Rebecca of Sunnybrook Farm...sickly sweet, a bit ditzy, and overfriendly 3. If #1 and 2 fail, then apologize and escape immediately.

yeah, i live right near there, the old guy actually wouldve let you tour the place.. theyre real nice, we always go ther to take pictures and such... keep up the abandoned stuff, it keeps me on the roll to knwo where to go graffiti!

yeah, i live right near there, the old guy actually wouldve let you tour the place.. theyre real nice, we always go ther to take pictures and such... keep up the abandoned stuff, it keeps me on the roll to knwo where to go graffiti!

colleem wonderful website but whats w/ the apolgize for slavery crap?is this art/poitics? please tread lightly w/ the politics in the deep dirty south. yeah there were slaves here a long time ago but that really doesnt involve either of us just snap the damn pictures

And "me" just reminded all of us that the "ignore it ever existed" attitude is alive & kicking.

Great pics, though! :-) I always pass Cinclair on the hwy and never thought about venturing inside...

The above tractor did not witness slavery. Slavery in the US predates gasoline-powered tractors.

I go to school right next to Cinclare.
Glad it closed, sugarcane processing smells terrible.

keep up the abandoned stuff, it keeps me on the roll to knwo where to go graffiti!

somehow came across your blog while looking for a article for a class, but I have to say I'm thrilled I found it ...will definately come back sometime.

somehow found your blog while searching for a post for a class, but I have to say I'm glad I found it ...will definately read some more post sometime.

somehow stumbled upon your blog while searching for a post for a class, but I have to say I'm happy I found it ...will definately subscribe sometime.

This is what we call a certified historic landmark right here! By looking at those pictures, I can imagine the people that had been working and bustling throughout the entire plantation in the past. It's kind of fun to think about it, especially the fresh and sweet smell of the sugar cane floating in the air. Wow! Anyway, I hope they can make this plantation operational again. The equipment can be replaced, and the building can still be renovated actually.

INTERESTING COMMENT ON SLAVERY AND THE TRACTOR.....Actually as a child I my family that lived there until they closed the housing. It was a form of slavery because as a worker you rented their homes, purchased from their General store, and the majority of your income went back to the owners, there was little if any left. Children education was limited by harvest. Cinclare was their world. This was the 50's until closing (200?)....P.S sugar cane processing IS NOT A SWEET SMELL