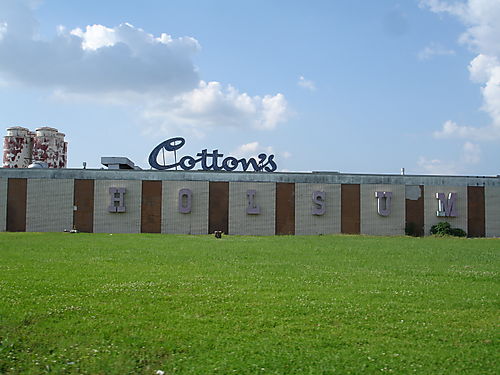 Let's back up to earlier that day. Our first stop was a site I'd been wanting to visit since spotting it a few months back: Ten Flags Inn. Or as it should now be called, Ten Poles Inn. 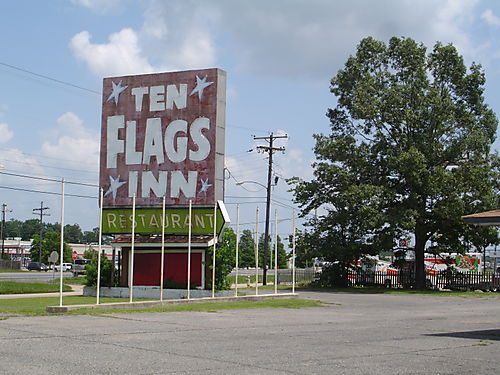 Imagine our surprise when this "abandoned" motel had a few cars parked around the lot--not the usual kind you see languishing away in their free storage at abandoned sites around town, but cars that looked to be in use at different room doors. 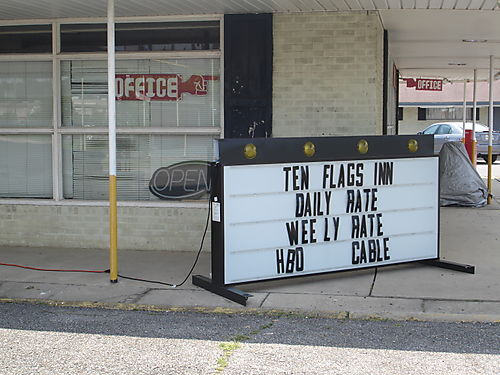 Turns out, despite the initial appearance, Ten Flags lives on! Well, it's more like limping along. Shortly after we got out of the car, a small woman emerged from the office, laying a supremely suspicious staredown upon us. She wanted to know what we were doing. Rachel explained we were just looking around, which we could tell was a decidedly unsatisfactory explanation for her. I think I chimed in with the usual "We're art students!" excuse, which she also was not having any of. She did not turn off her suspicion staredown death ray, but said, "I know you're up to something else, but sure, look around," and retreated back to the office.

We didn't stick around long but got a few shots of the (actually abandoned) restaurant on site, last called A Formosa Buffet House. 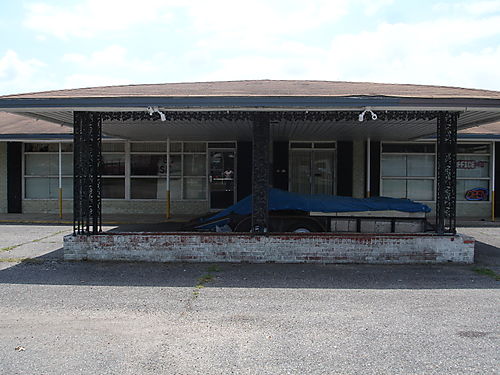 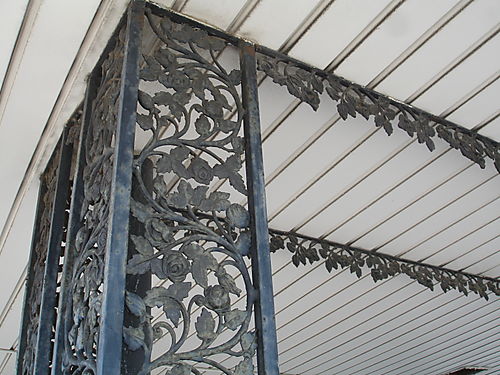 From there we went to the Bellemont motor lodge, as seen in three recent posts. After that we hit a creepy daycare center Rachel had seen in her travels.

Turns out, the daycare center might feature some creeps on the outside of it, but it, too, was actually still in business. Although, would you choose a day care with this broken-down shack next to it? 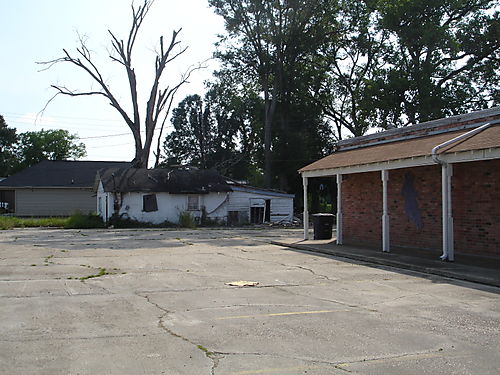 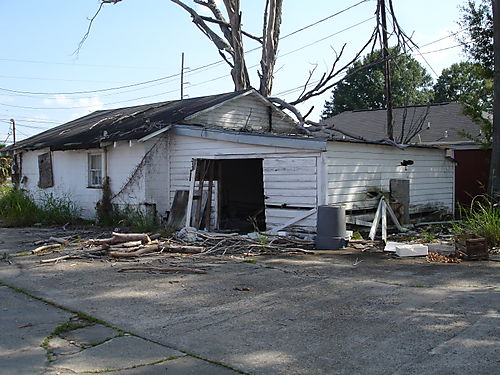 Here are the views in through the front door. 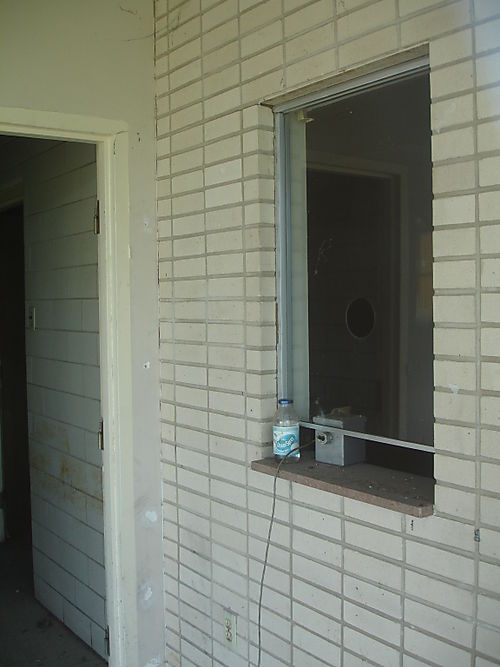 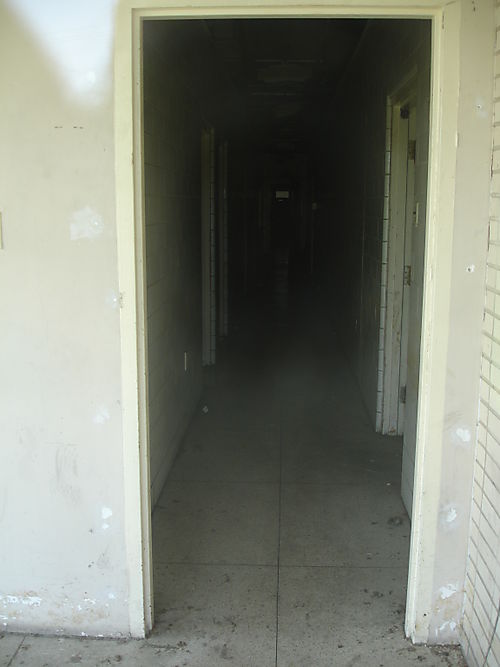 Around the corner, a bus was taking advantage of the patented Abandoned Baton Rouge Free ParkingTM. Need a parking spot? Go abandoned! 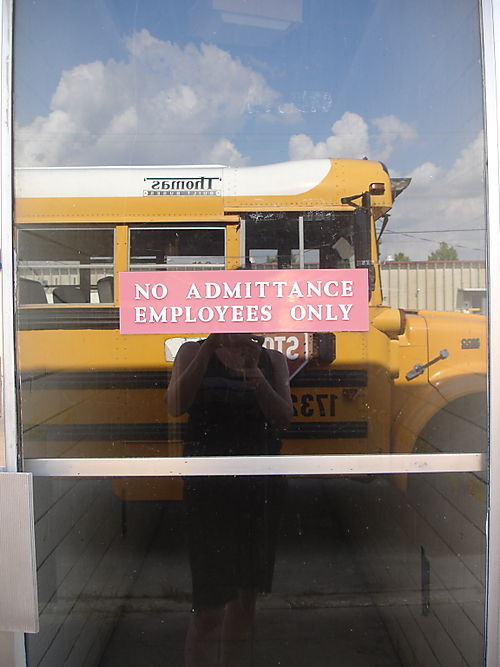 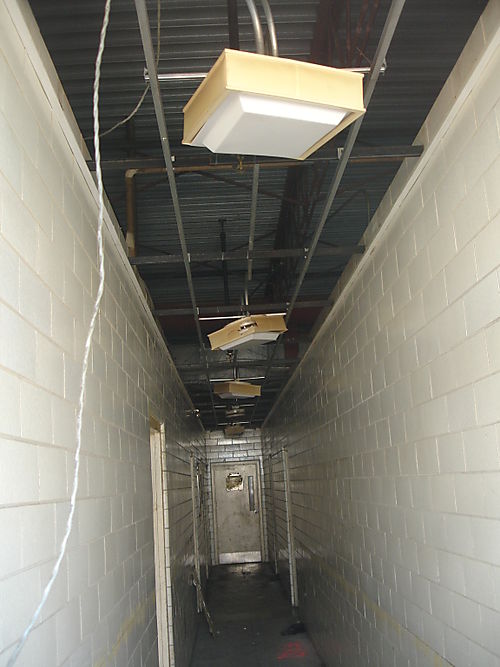 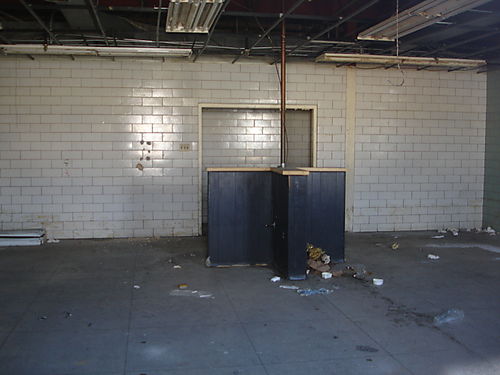 From there, we went to an industrial area. This view drew my eye because it could almost be any era since the 1950s or 60s-- the old train cars, the amoeba-shaped sign next to them, and the cursive logo on the parts and services shop (still open). Looking in the opposite direction from that photo, there were several single-story empty buildings, some less empty than others. For example, judging by the deodorant and toothbrush, this one seems to be someone's overnight destination. I guess sometimes you just want to get in a few rounds of pool with the resident fat tabby cat, away from the distractions of everyday life.

And this electronics shop was even less empty. Area artists and sculptors, do you need free materials, especially of the electronic kind? You're welcome!

All the cars in front of this place were filled with scanners, printers, and other electronic refuse. 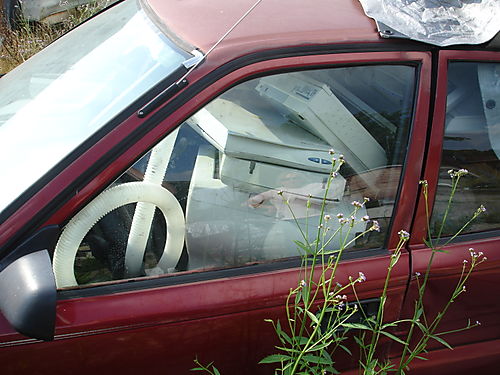 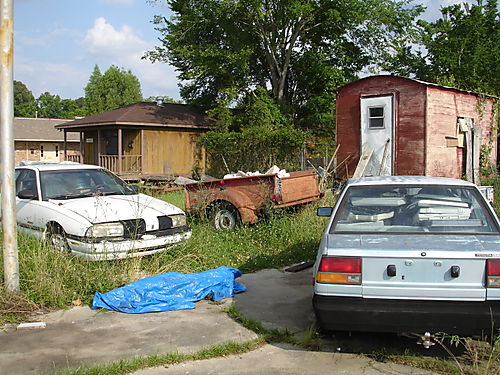 Around the corner from that trailer, boats! 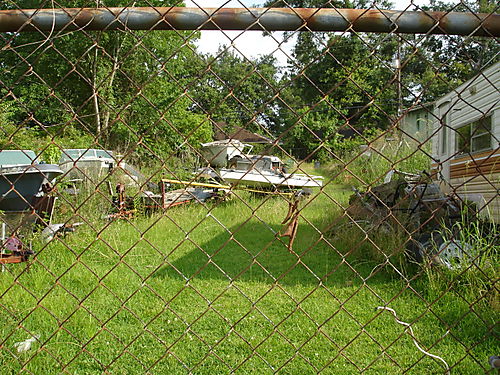 And finally, speaking of art, some accidental outsider art. I see it as a meditation on the circle of life. 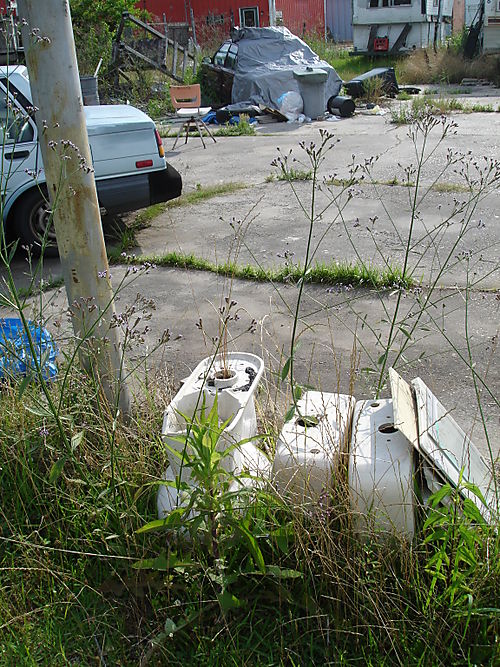 Like that chair in the background? I did, too. Yoink!

Oh, joy. That "industrial area" on Darryl Drive is exactly 10 blocks east of where I grew up, and where my mother still lives.

It never was the garden spot of the Deep South, but good God!

Now I know exactly the route you took on your exploration. And, yes, nowhere on earth smelled better than that stretch of Choctaw when the bread was a bakin' at Holsum.

It still kind of smells like that -- at least when I was last there -- by what used to be Wolf's Sunbeam Bread on Florida by the Interstate.

Ours was a Holsum family. But Sunbeam bread was "batter whipped," and you could tear a slice perfectly down the middle.

But back to issues of abandonment . . . it says a lot when you find it tough to determine whether properties in BR are abandoned or not. *Sigh.*

Anyone know how long Cotton's has been abandoned? There is another *huge* empty building at the corner of Choctaw and Wooddale just down the street (east) from the Cotton's Building that has always fascinated me..

Chris, do you mean near the corner of Lobdell and Choctaw? That would be the old Sears Service Center. I seem to remember some other now-abandoned buildings other than houses back in there, too.

Favog speaks truth about the Holsum plant,which I believe stopped baking around 2000 or so. If you had gone a block South, you could've had a good run of 'are they/aren't they' on Adams Avenue. There's a ton of stuff to the west, but be careful, you're definitely moving into an area where you don't want to be after dark.

BTW, when the building housing the day care center was up for sale a few years ago, the shack was part of the deal and was advertised as 'a great source of rental income...'

Yes, I did mean the corner of Lobdell and Choctaw. Sorry about that. Ah, the Sears Service Center. I now remember seeing a faded sign. I'd like to explore that one day.

The Holsum plant around 1990 or so. It's sad, because I can remember the neons on top of that building illuminating in the evening, along with the letters that spelled out the word "Holsum". It gave it an almost "larger than life" look. As for the Ten Flags, I remember that in the early 1980s for different reasons, and that's all I'll say on that.

The house I was raised in was just south of the Holsum bakery. The smell of that bread baking was divine! We used to walk to the thrift store to purchase snacks all of the time.

Hmm. Your abandoned BR pics are starting to look like my work's haz waste group's pics. When I look at them, I feel like there's a secret hidden toxic waste barrel just out of view.

The toothbrush! Ah! I think seeing the living presence of someone in a clearly abandoned place is really intriguing...
too bad you can't be a P.I. with a streaming video camrea set up.

I've often thought someone scouting locations for period piece movies could find any number of suitable places in or around the Choctaw Drive or North Street areas. Of course, general safety could be a concern, particularly after hours.

I really dig the Holsum Breads building. From a distance, the building looks quite habitable and hip (with a little finishing work)!

The daycare building used to be the Mcgee's clothing store. It was a closeout store with long rows of clothes. It had a shoe section and a small men's section. There was a security person at both ends of every aisle and they would not hesitate to yank a knot in your tail if you were not with a parent. My mother and grandmother would drag me in there for long shopping sprees. It was a unique place for its setup and for its security plan.

My grandfather usually buy good bread in The land of Cotton's.. I still remember it taste.

this article got me all so nostalgic. i hate to such realities.

Yum, this has always been a favorite at our local restaurant. Now I can try to make it at home--as the organic food delivery always brings me advocados and I never know what to do with them (I'm from Michigan, you know!)

Terribly sad. Love the photography though.

The Ten Flags Inn used to be the Palms Motel and my family lived there for three weeks in 1968 waiting for our house to be available. It used to have a pool and restaurant. My mom would drive me to Park Forest Jr. High, one sister to Glen Oaks High and one sister to LSU and back every day.

I grew up in the Fairfield Subdivision, I remember Holsum, Brown's Velvet, etc. It was a wonderful place to grow up in back in the day, hate to see its decline.

our band used to rehearse in one of the rooms of that Electronics place. if you think the outside is bad, you should see the inside. it would be the star of a show called "Extreme Hoarders". hallway and unused rooms full of broken relic electronics and moldy books, stacked floor to ceiling.

My grandfather was a baker at Wolf's Sunbeam Bread and baked extra breads each day and brought them back with him to hand out a front doors of homes he knew needed that bread during the Great Depression. At a young age, he developed "white lung" disease and passed, leaving his family in North Baton Rouge.

I go back to the area to get the best Cajun food for the price anywhere at Tony's Seafood, and reminiscence through the old neighborhood and iconic places. I remember a tour of the Holsum Bread bakery as well as Jack's when I was a elementary school student at North Highlands School.

I am happy to share history of Cotton Brothers Holsum Bakeries. This was my family's business and I have information & photos. Please contact me if you are still interested.
ccnolan322@yahoo.com --Cathy Nolan