Home Archives Profile Subscribe
Motel Zero and the Horndog
Ain't that a kick in the gut? 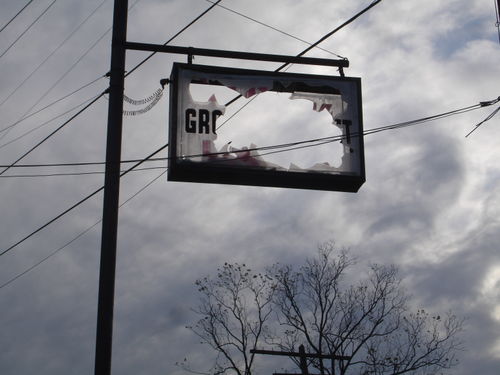 I have now used this title at least twice in previous blog posts, but not on this blog, so no matter.
Kara and I and Miss Lola Mae the chocolate Labrador went out on another bicycle jaunt on Sunday. We encountered numerous dogs, of the "hot" and "stray" and "barking like they wanted to rip out our jugulars" types.

Here is one that falls under the "hot dog" category, on the side of what I decided was an old whistle stop cafe, as it was set right along some train tracks. 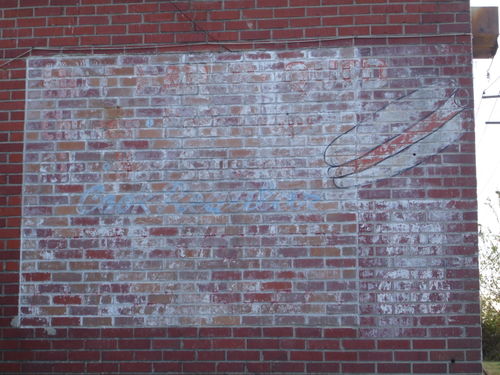 If you look closely, you'll see the ghost of what appears to be a hand-painted Community Coffee banner on the building. 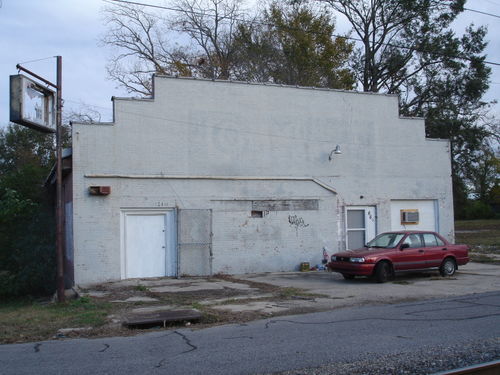 I know: BFD. It gets better after the jump. 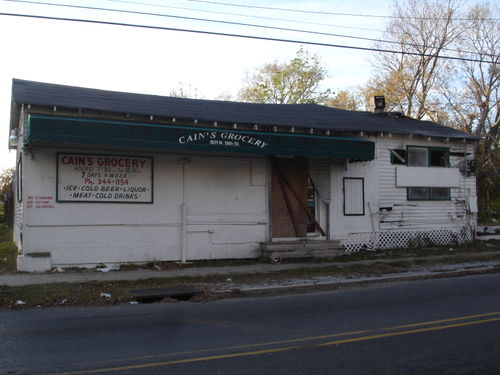 Cain's Grocery, no relation to this Kane. The right side of that building looks like there was an "accidental" fire, kind of like that one at Romano's. 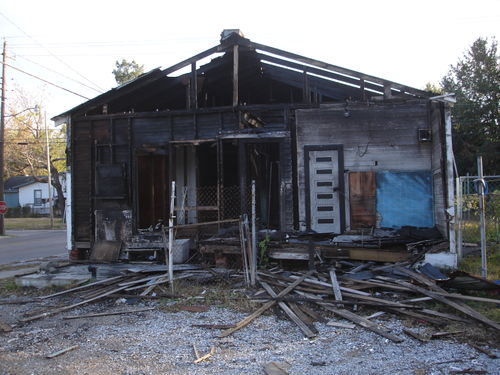 --Somewhat of a side note, sparked by today's explorations, plus that Romano's post linked above that featured a Mason lodge: why are there so many Mason lodges in Baton Rouge? I've personally encountered at least five in my travels, most or all of which appeared abandoned, but still: How many chapters does/did one city need? And should I just cool it on this topic right now lest I bring the wrath of the secretive and powerful Freemasons upon myself?

Across the street, the abandoned North 19th St. Baptist Church. 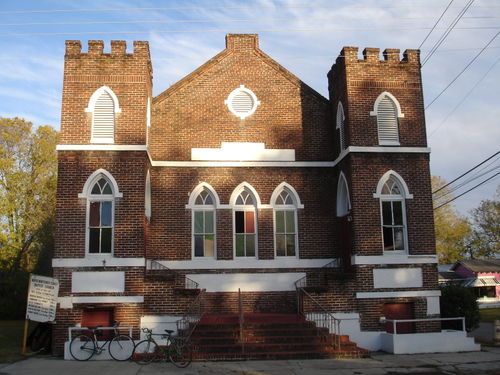 And I swear that I put no special filters on the following photo (I hate those), it just came out this way, even in the viewfinder as I shot it. 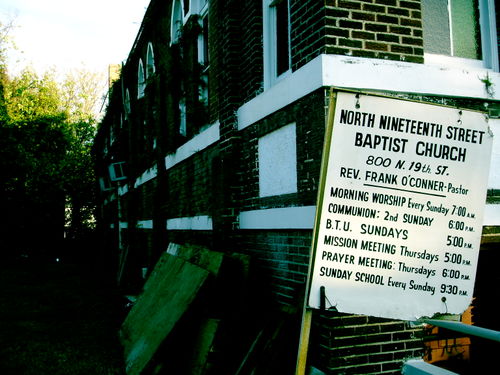 Holy "Tales From the Darkside."

Now watch as the plants of Baton Rouge reclaim another structure. 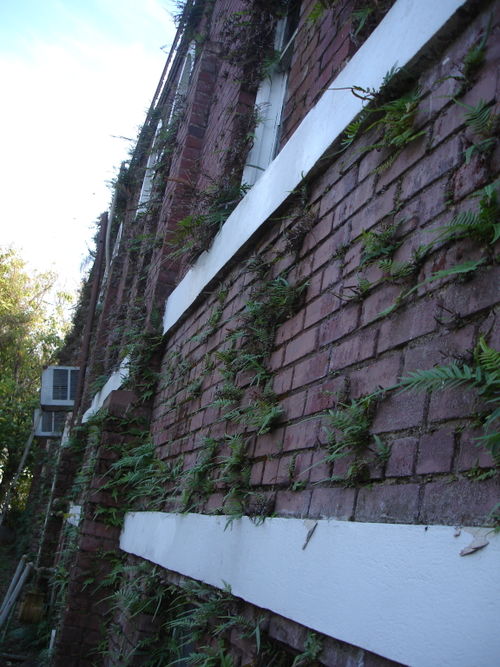 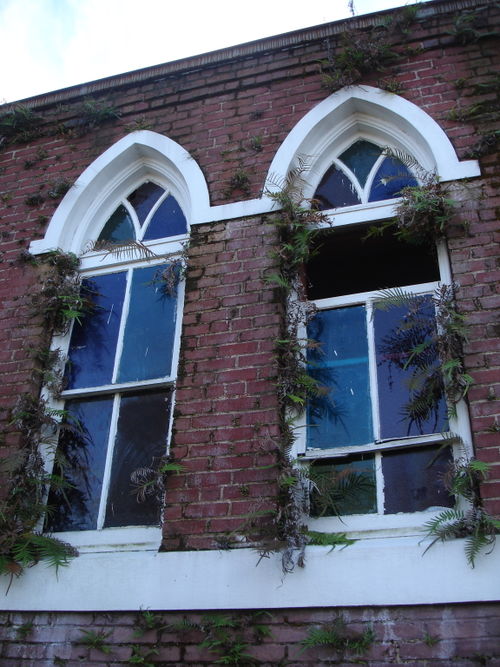 Just up the street from that, a onetime dog catcher canine jail. 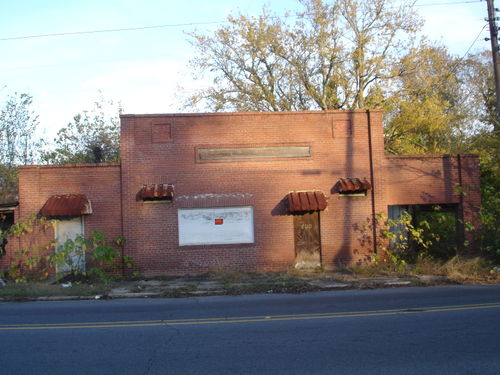 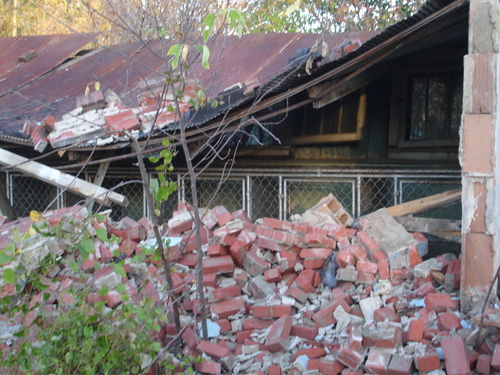 Just up the street from this, visible in the background, an empty school. But just around the corner from this view in the rubble of this dog catcher building was an old man toiling away, methodically separating brick from brick. Why? Unknown. 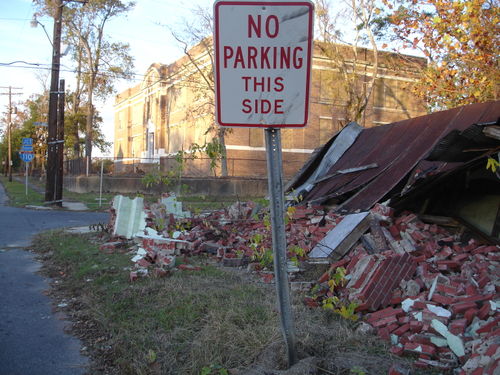 When we happened upon this school, I remembered receiving an emailed suggestion from a reader to come see this site, but he warned to never get out of the car. Oops. 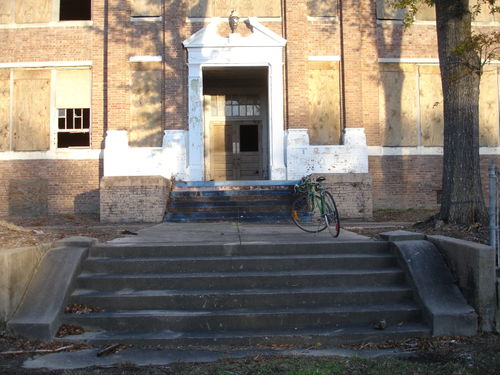 C'mon, how could we not go up when a panel was missing from the front door? 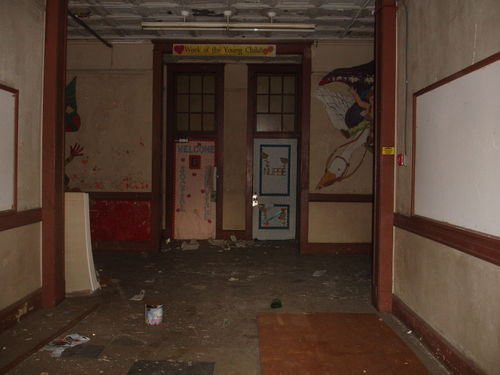 Welcome to the Week of the Young Child, featuring a child plummeting to his death on the back of Mother Goose, and a disembodied hand off to the left flailing for assistance. 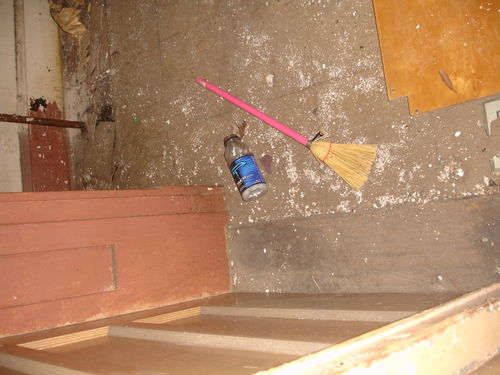 Quite reminiscent of the witchy broom at the Baptist church, only creepier due to the child size. 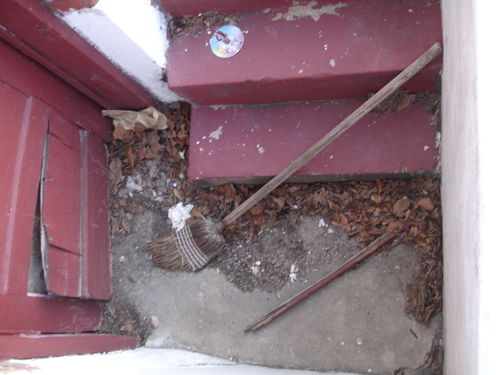 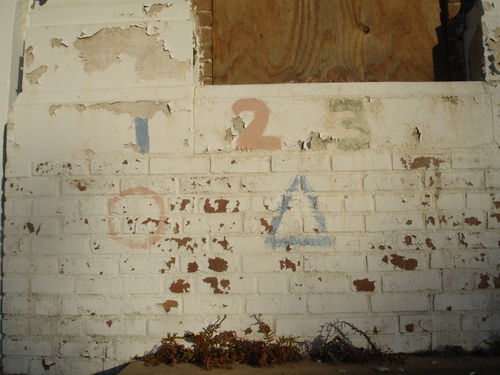 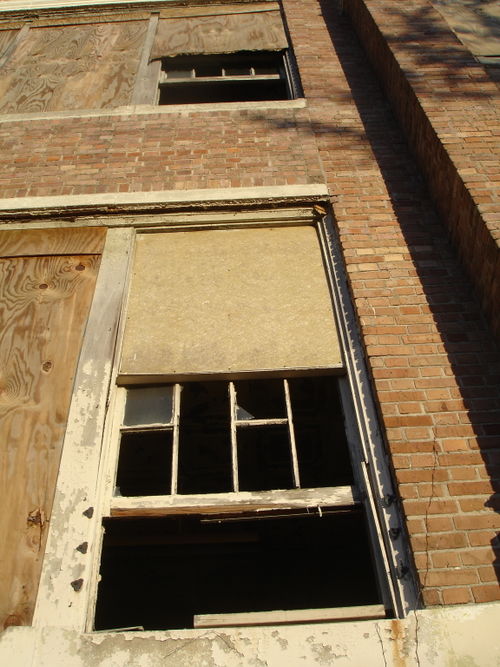 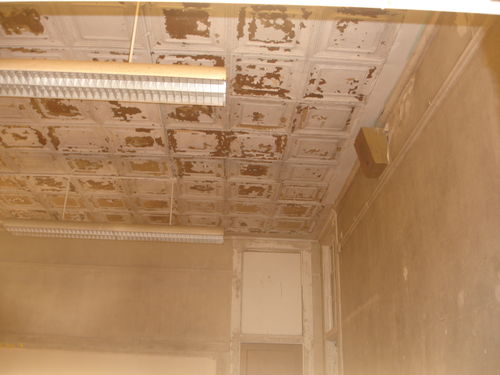 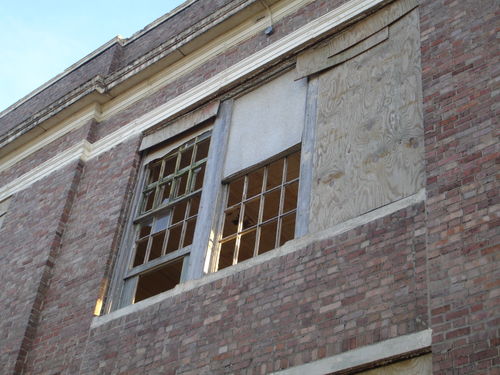 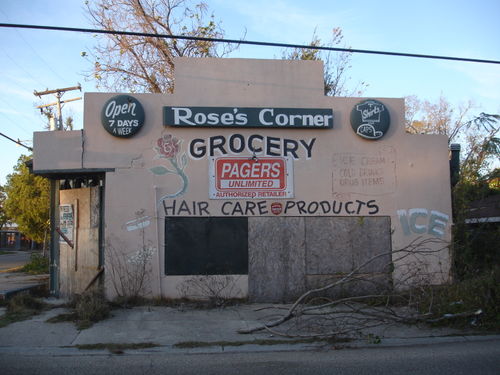 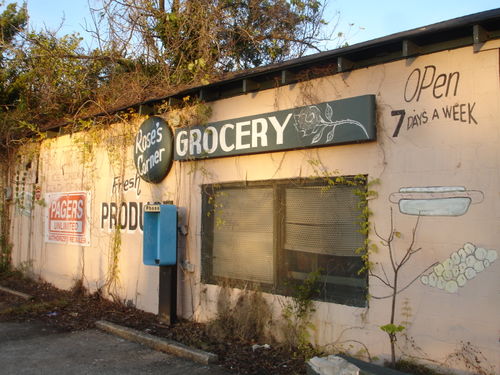 Plus a look inside, including what appears to be small footprints in the dust. 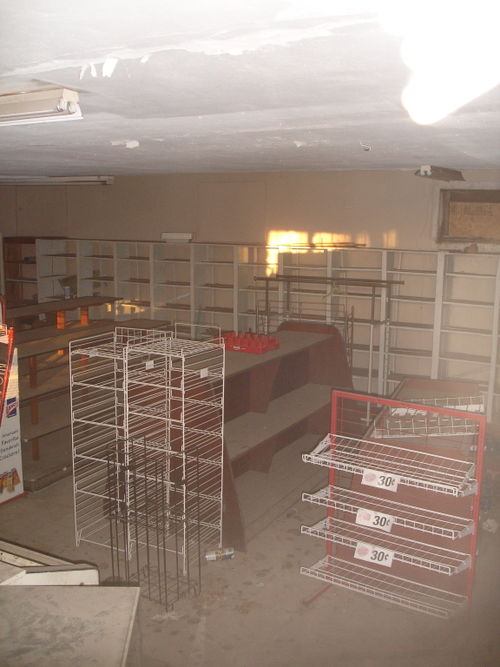 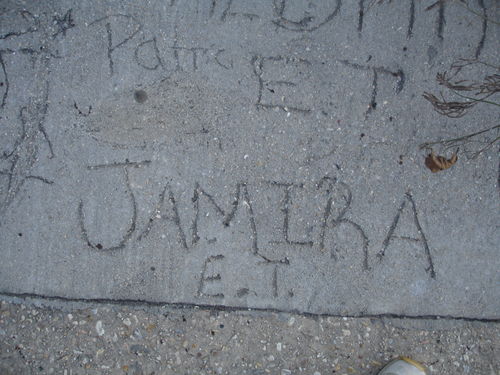 HELP ME! I'm a building and can't get the hell out of Baton Rouge and go somewhere people would take care of me!

Help! Help! I'm being left to starve and rot.

I'm no dummy, I used to be a school. They used to not let white kids learn in me, and then when they legally could . . . none wanted to.

So I was left to die. Especially after that Head Start thing didn't work out.

Lawdy, I've had it! See how those people treat a building on the National Register?

I think you would like that discovery or history channel special that showed how the world would change if the humans were wiped off the face of the earth...kind of like an XTREME abandoned sitch.

The Scott School is slated for redevelopment!!! The same non-profit that built the OBrien House annex is converting the school into affordable housing: http://www.gchp.net/projects/baton_rouge_midcity_bchp_scott.pdf
The church is still in use; apparently it has a rockin' Hammond B3 organ.

Maybe it's not a pile of biscuits, but rather the beloved Donut Holes everyone obsessed over. :)
(have you tried southern "drop biscuits" yet?)
This one was not only creepy in picture, but you made it a scary story! I think the ferns growing out the bricks are beautiful & 100% tales from the dark side!

That school is seriously beautiful, although it could use a shave.

Side Note: In the 1950's there was a major growth in membership at the masonic lodges. This led to the formation of 5 new lodges, in addition to several already in the area. Since that time, the membership has declined again, leaving many lodges merging and old buildings being sold or left to waste.

I attended that church as a young lad. At the time it was called "New Guide Baptist Church". But that was about 35 years ago.

It's only been the last few years that I've come to appreciate the beauty of the building and which I could play some part in restoring it.

This church had a barber shop on the right side of the entrance. Supposedly, the only church in America with its own barber shop.Quite a landmark back then.
The Doggie Jail was Dr. Virgil Ford's Animal Hosp. He was one of the most caring vets I have ever come across. He cared for folks pets even if they couldn't pay. He passed away in the last few years.

I went to that head start when i was little. They closed it then to "rebuild". thats been about 12 years ago

I drive by these 19th St. buildings every day going home from work. The old Cain's grocery has been demolished, the school is still abandoned, I've never seen anything going on at the church, and I still see people sorting through bricks from time to time!