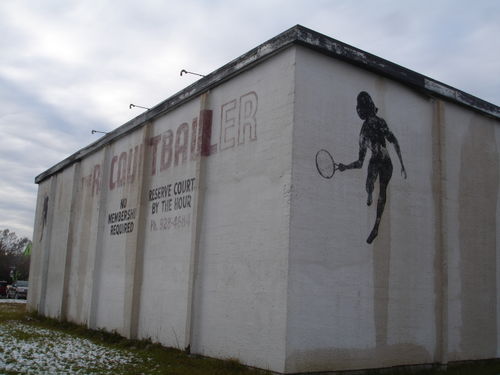 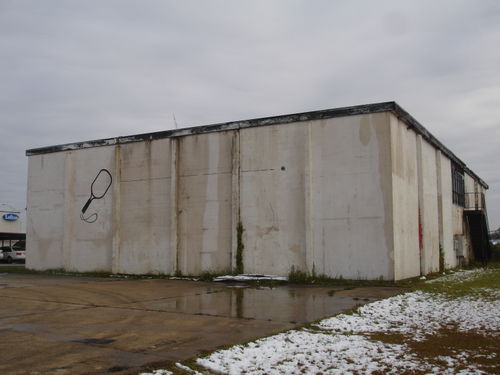 I went to The Racquetballer immediately after getting a tip from a reader. He thinks it closed in the mid-80s and the inside probably looked like nothing had changed since. That was all I needed to hear.

I went alone, which I rarely do anymore, and fortunately no one was there. Well, except for your granddad's Army buddy's graffiti. 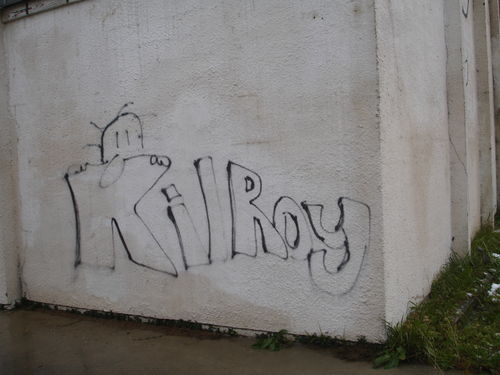 Turns out, either a lot had changed since 1985, or they liked their racquetball wet back then....With a ceiling of stalactites, as we'll soon see.The Racquetballer? Not so water-soluble. 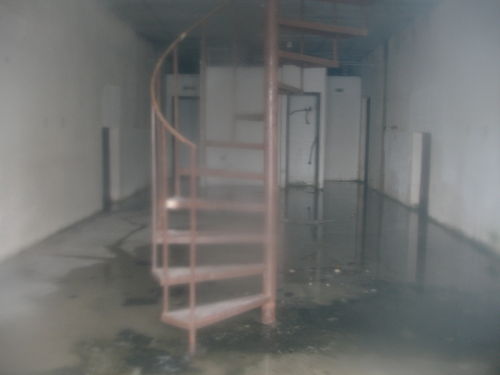 Notice above, it looks like the shorty troll doors were once full-sized.

This was on Baton Rouge's one rare day of snow that I ever expect to see. I didn't anticipate wading through such a swamp, but my feet, shoulders, and hair were drenched by the end of this visit. 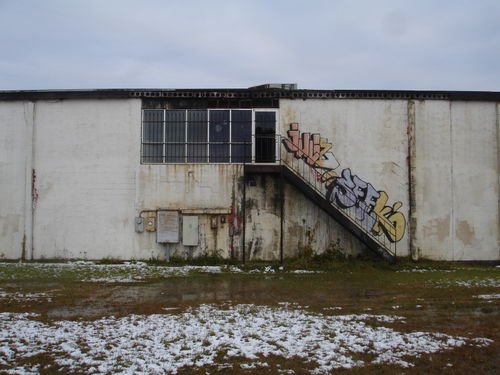 A climb to the second floor was in order since most of the glass on that door was broken, offering a good view in, but not access.

Inside on this overhead viewing level (what sorts of conversations do you suppose took place on this level in the 80s? Every word came out of heads wearing terrycloth headbands): a multicolored living floor, a book, and graffiti reading PANCREAS, where the A is an anarchy symbol. 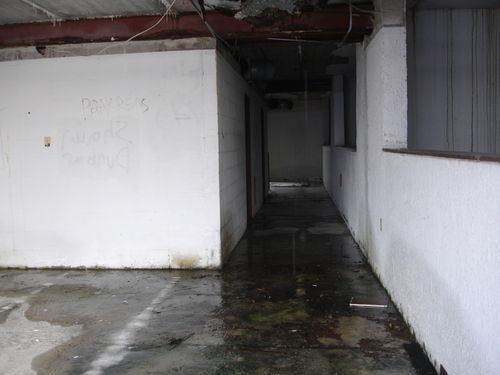 These are some of the aforementioned stalactites, forming from a court ceiling. 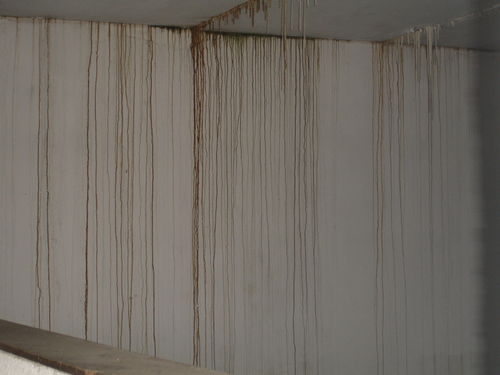 The snow had stopped but water was still dripping from the roof like a steady rain. It echoed here and there in the darkened courts, sounding a lot like volleying balls. Time to scrammo. 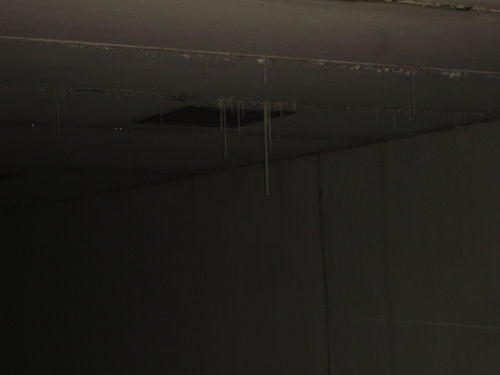 Side trip: Nearby was a cool old house that used to be an antique store. 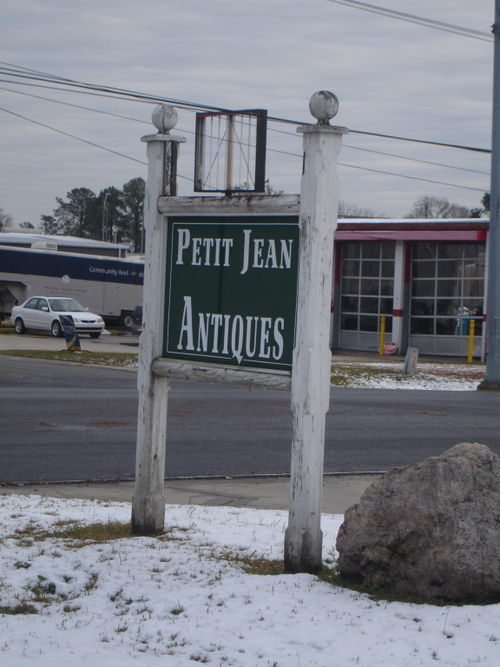 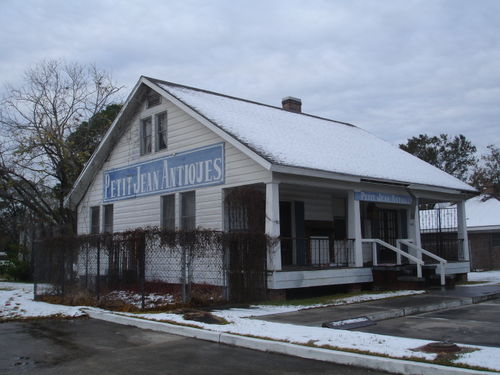 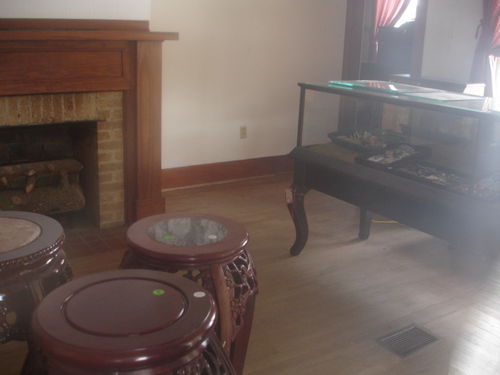 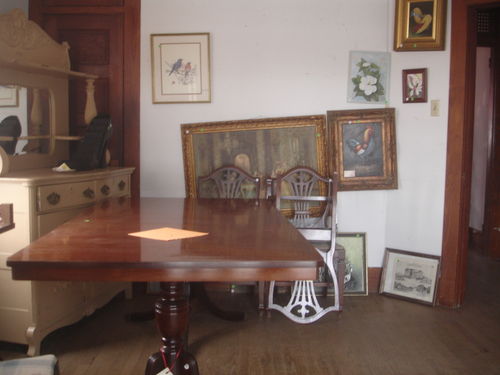 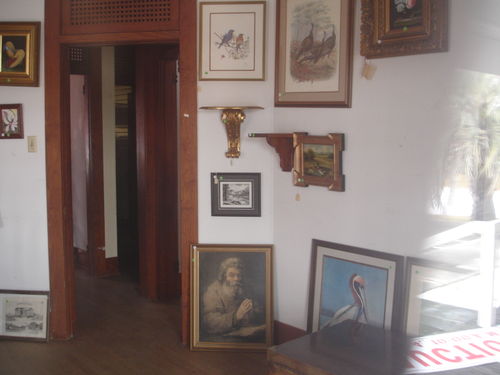 One of your creepiest posts yet! I think it's the racquetball.

I believe this building was recently sold after all these years. Saw something in the BR Business Report. Hopefully, the new owner can get this place back into good shape.

I wonder how long Petit Jean has been closed. Up until just a couple weeks ago, they still had signs up for a recent closeout auction. Their cool old truck has been gone for a while and I haven't seen signs of life there in ages (I live right around the corner and pass by every day).

PS - I certainly hope you are or will start wearing ventilator masks on your jaunts. Those stalactites are probably lousy with asbestos.

"A climb to the second floor was in order since most of the glass on that door was broken, offering a good view in, but not access."

UM would you seriously have gone inside by yourself? Wow do you have balls.

Also, I love the dining room table in the antique place. Can you get access in to there and steal that for me? : )

holy creep-y-ness!!!!!! The drips coming down the walls are the thing of freddy kruger driven nightmares! ah!

I'm willing to bet that that toxic black mold is just eating up the insides of those walls. Yucko.

I looked at the building about 10 years ago with the owner. Was interested in setting up a rock climbing business and the layout was great. Unfortunately, the building wasn't great. It was leaking, the a/c was shot and renovations were not something the owner was interested in doing. He wanted too much for too little and honestly didnt seem interested in leasing it anyways. Needless to say, I walked out on the deal.

was that the old racquet club? my parents belonged to a club like that when i was like 5 or 6 (early 80s)

That's the house that my mom grew up in. My grandparents raised 11 kids in what is now the vacant antique store. The people that lived next door to the house TRADED it with my grandparents in exchange for building them a new house in St. Gabriel in 1981. I've actually never been inside of the house, so thank you for giving me a chance to see it.

I used to hang out here as a pre-teen and early teenager in the late 70's-early 80's. Raquetball was booming back then. Back then a Mormon guy from Sherwood Forest area named Mills owned it. Not sure if he still does. I grew up in Drusilla and this was walking distance. They allowed us kids to play for free most of the time during the day. The adults came in at night. Love your site.

Hey, they are tearing this thing down today. I've got a pretty good view from my office window. I'm uploading a video to youtube. I'll send the link when it's done. If you want to see it live, get here soon. He's moving pretty fast.

Oh, it's bad that the racquetball training facility was neglected for many years. It looks like the roof has been the most damaged part as confirmed by the dilapidated floor. If gfred1964's claim is true, then that will be breath of life for this once-active facility.

I worked in the building next door to the Racquetballer when you took those pictures.. I know this judging by the date of this blog entry and the snow on the ground, I was at work that day! If only I would've known who you were then... I would have walked out to meet you!!! What a fun coincidence :)

My father passed away in January of 2008 and that following december was the first time it really snowed in louisiana since i have been alive. Petit Jean Antiques was the house my dad grew up in as a child. It really touched my heart to see these photos. Thank you so much for sharing.