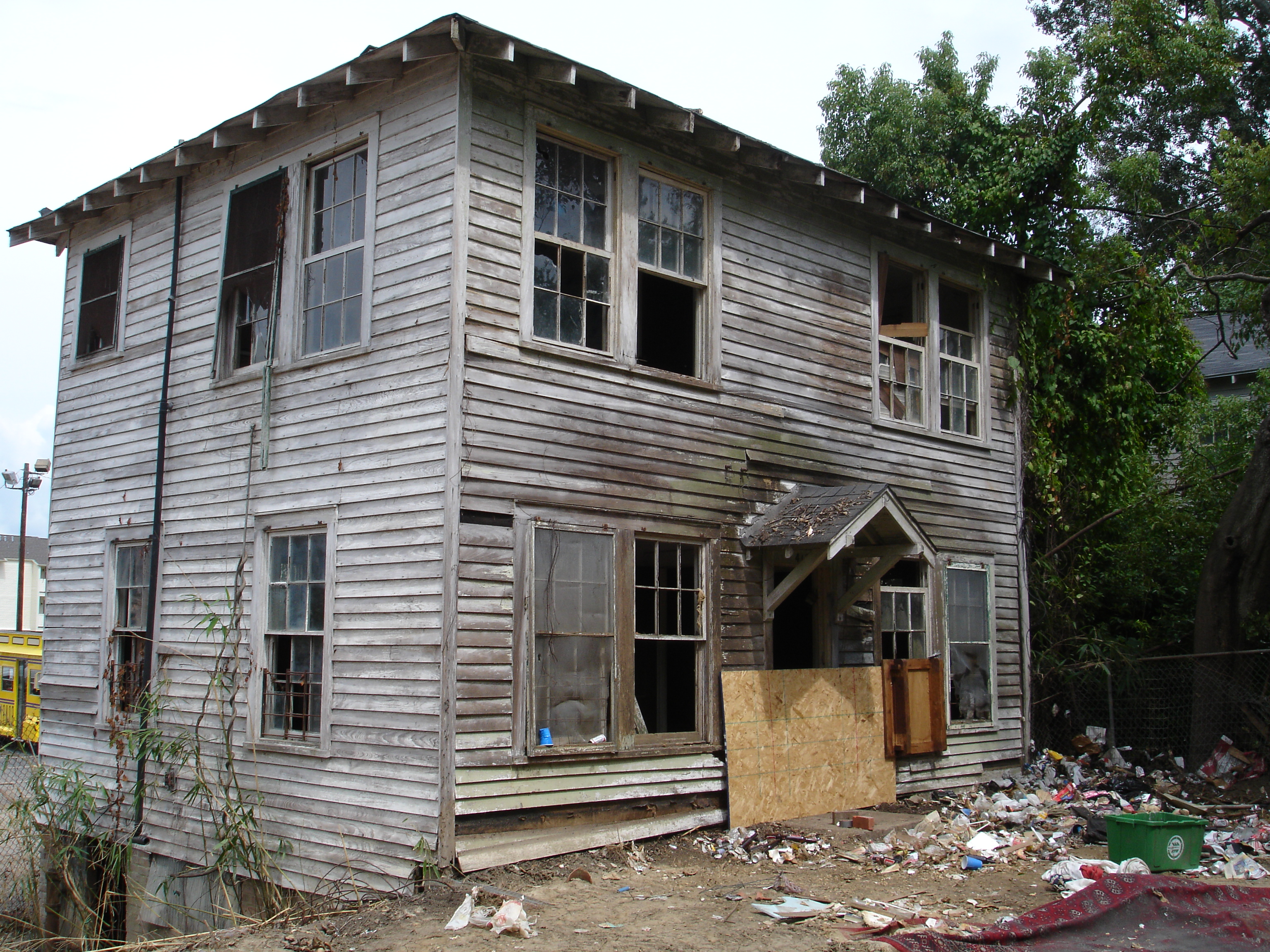 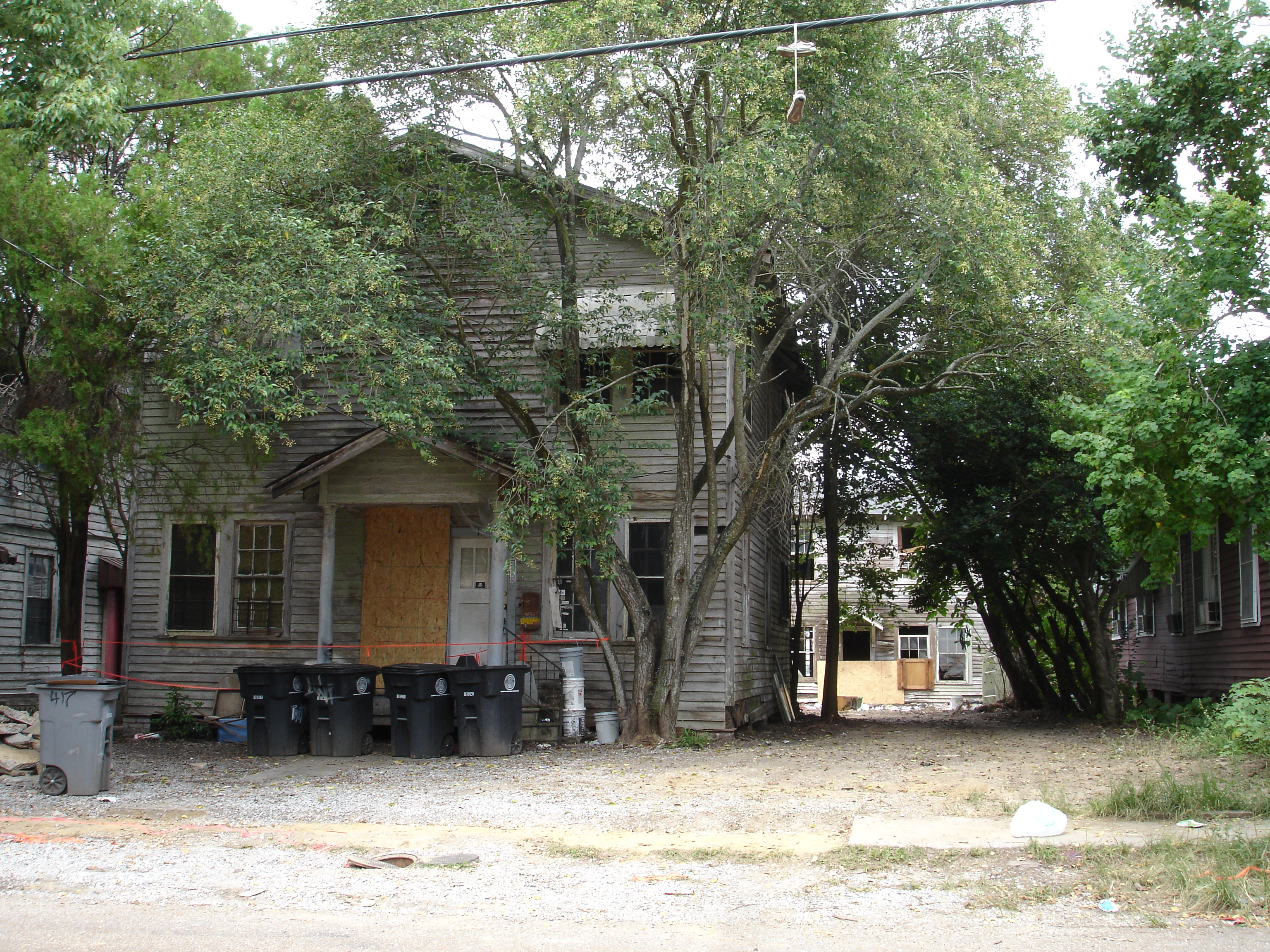 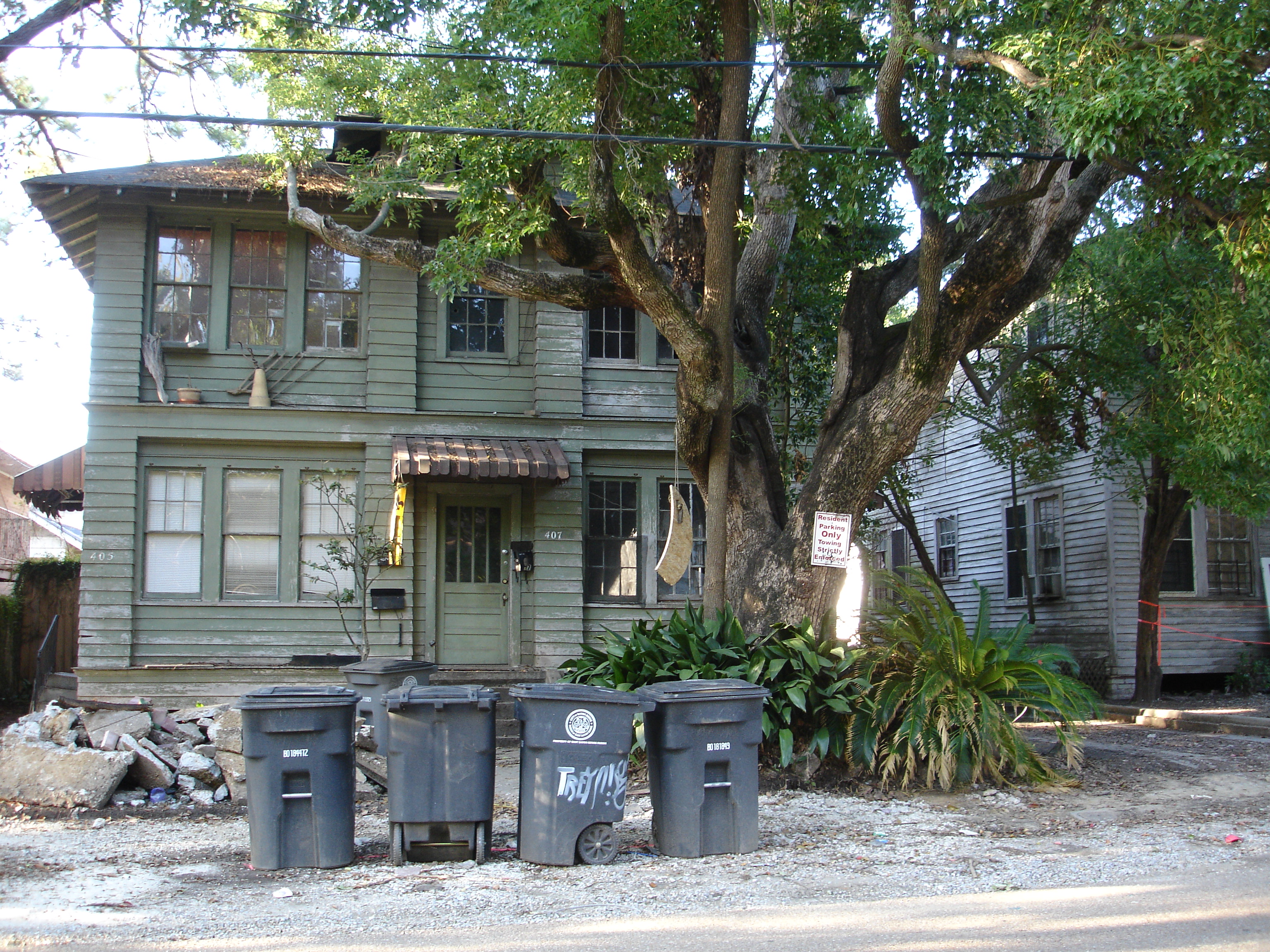 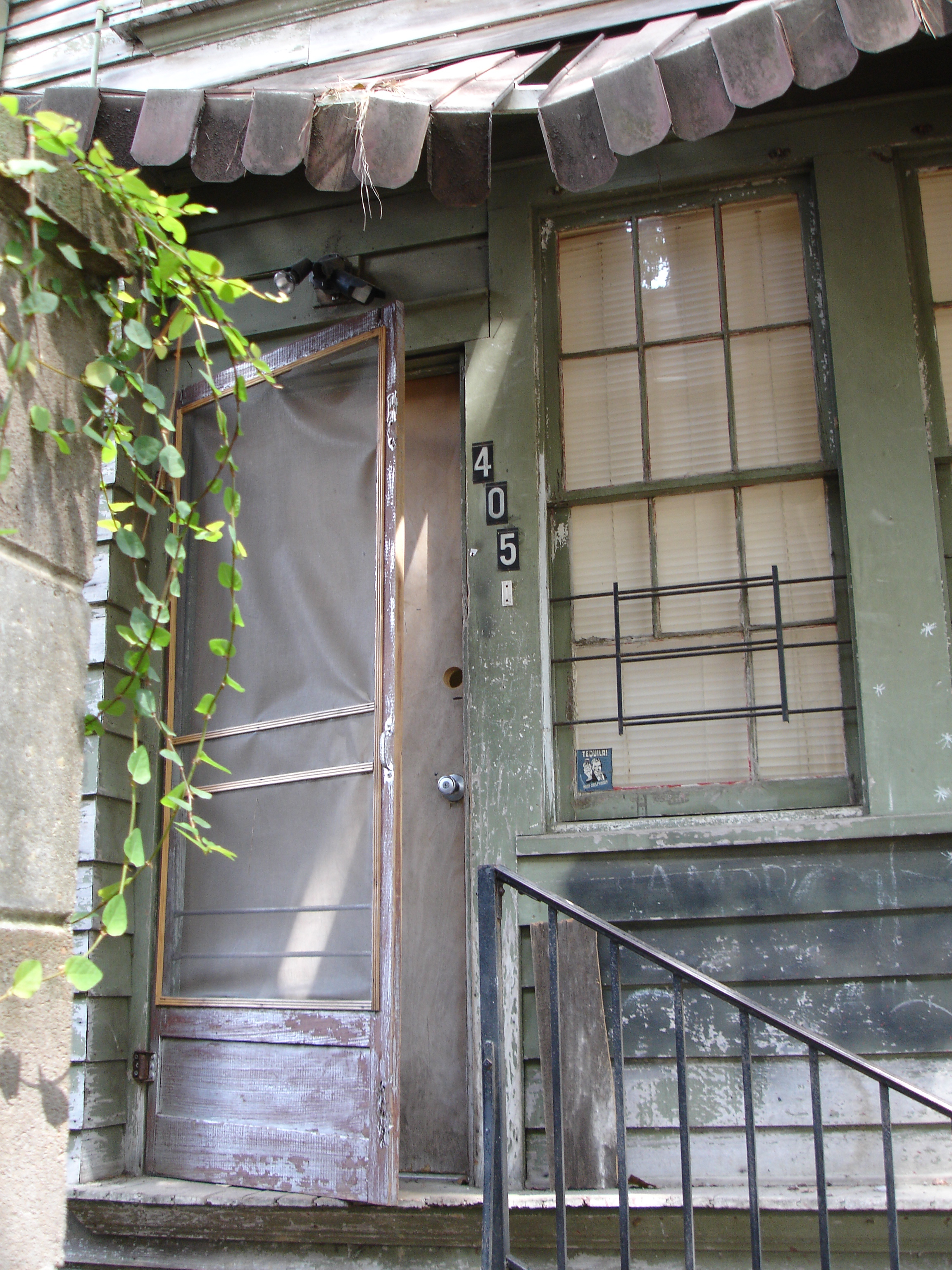 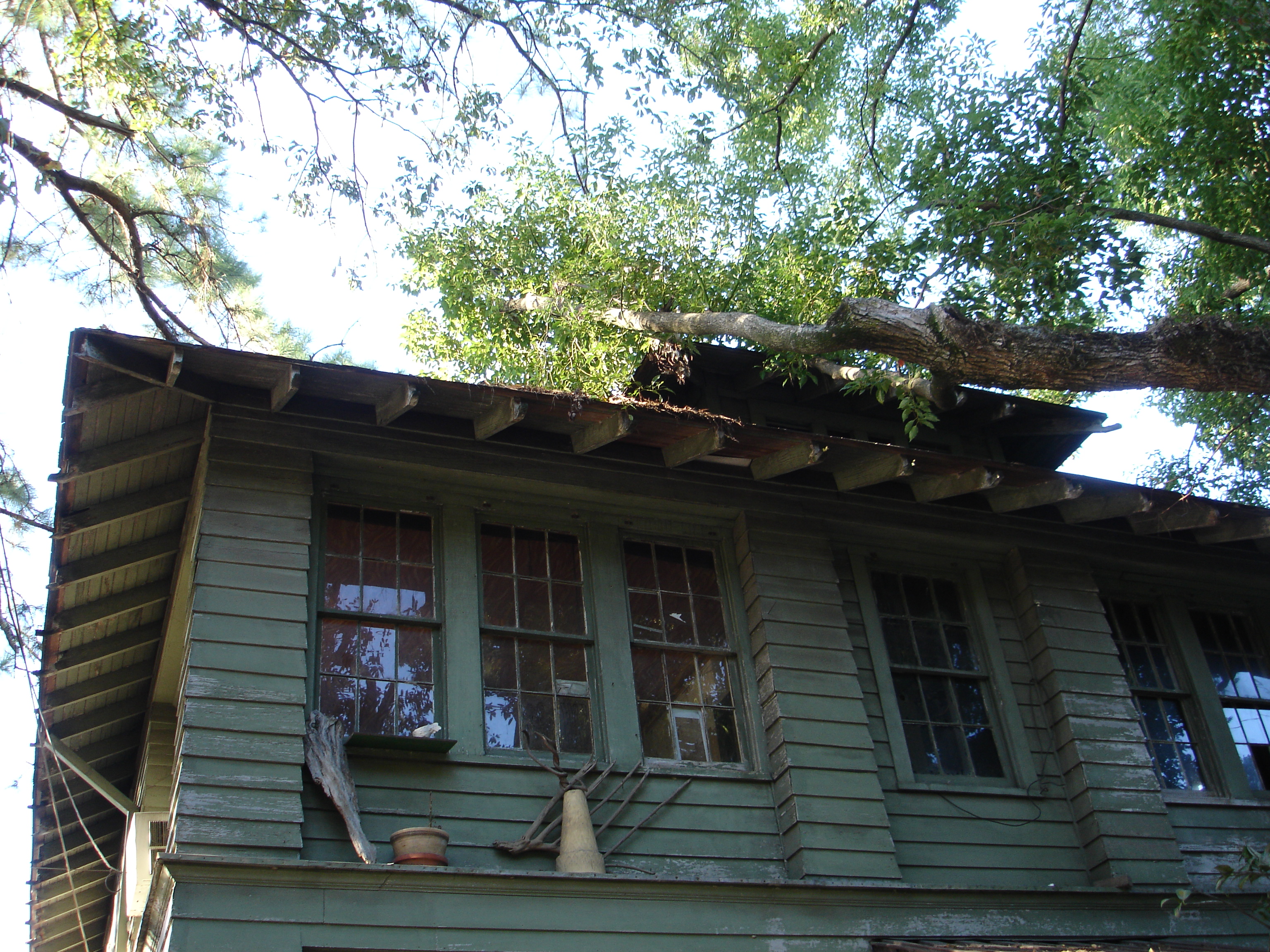 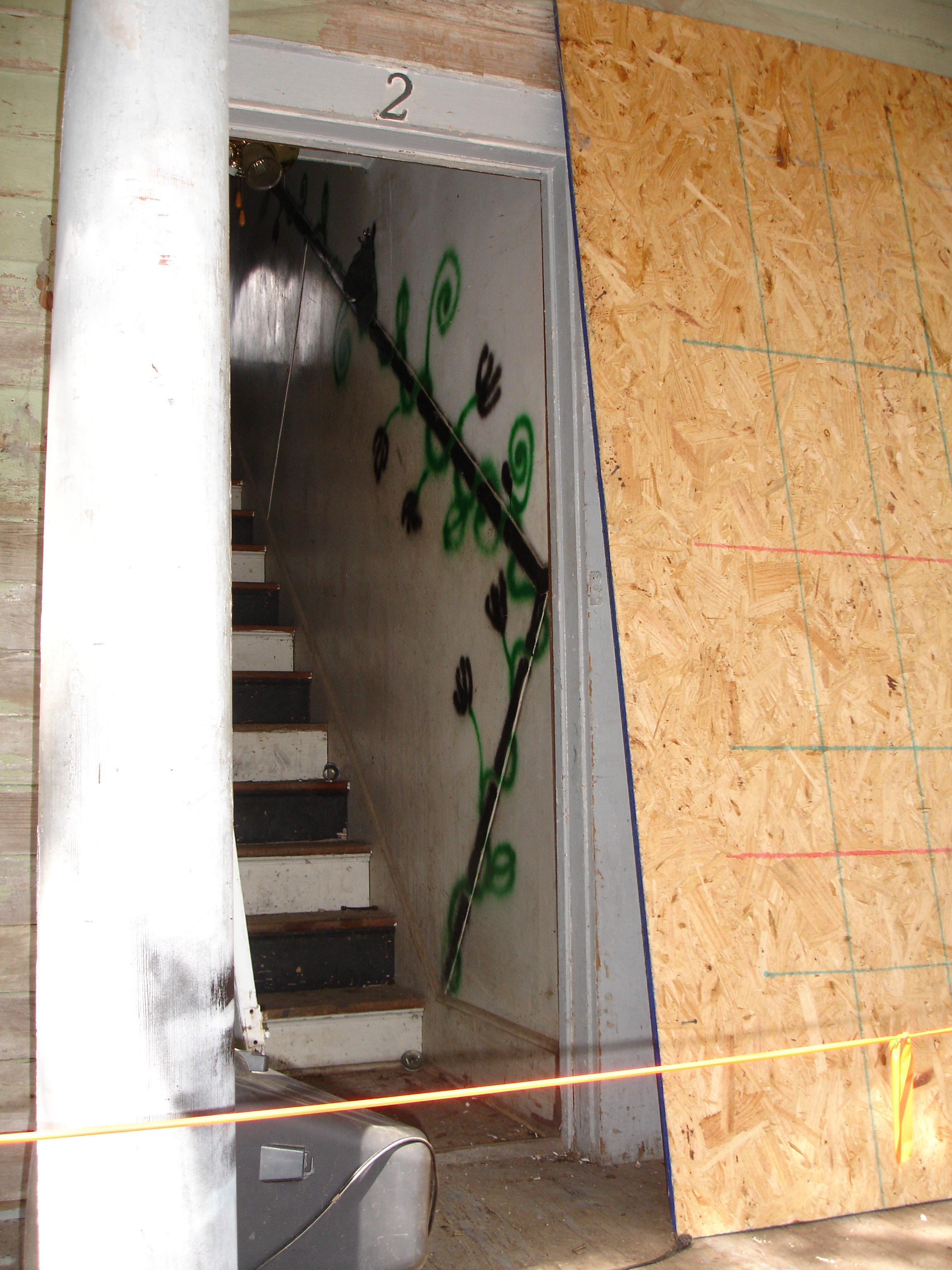 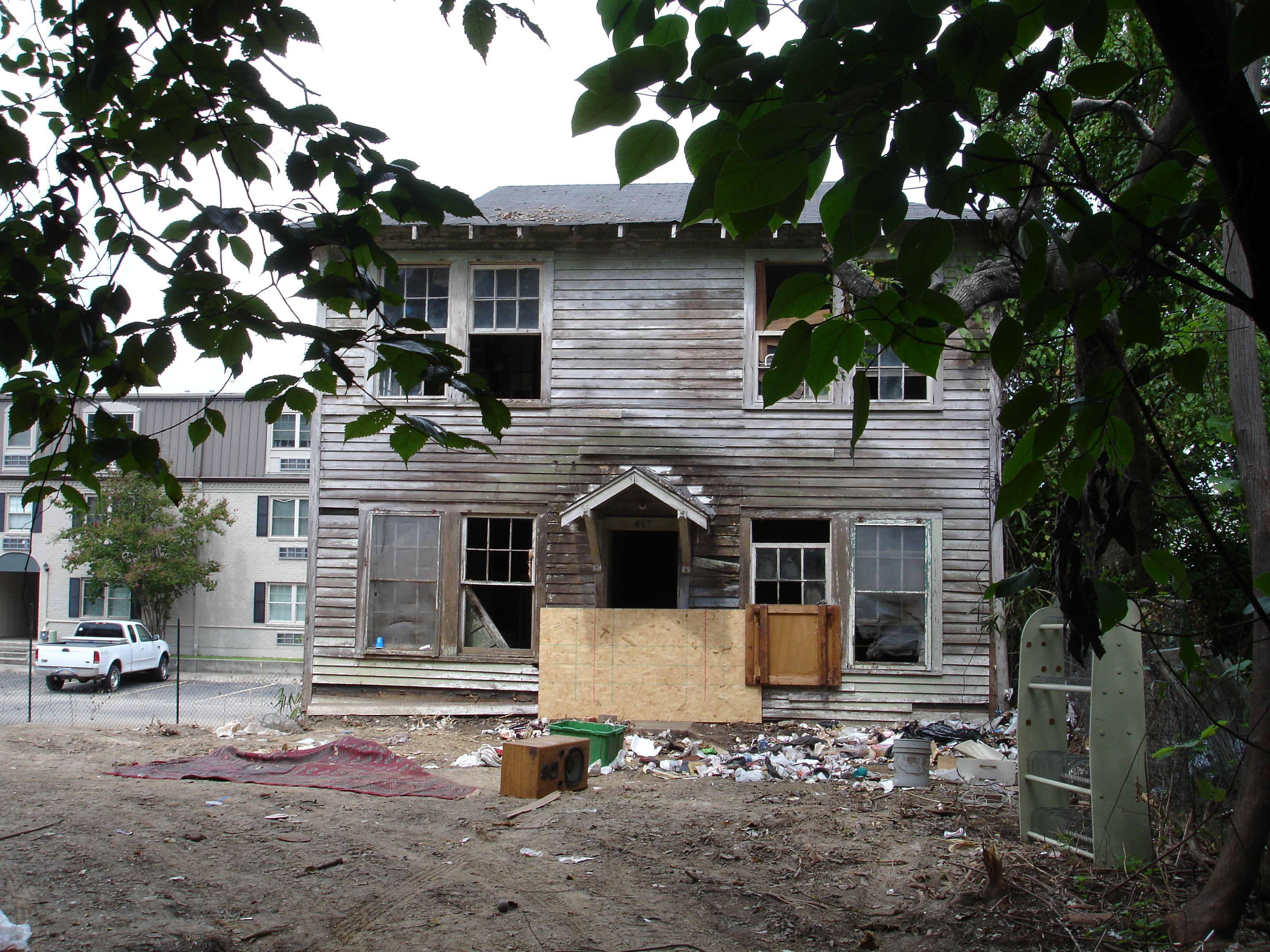 Inside this rear building: 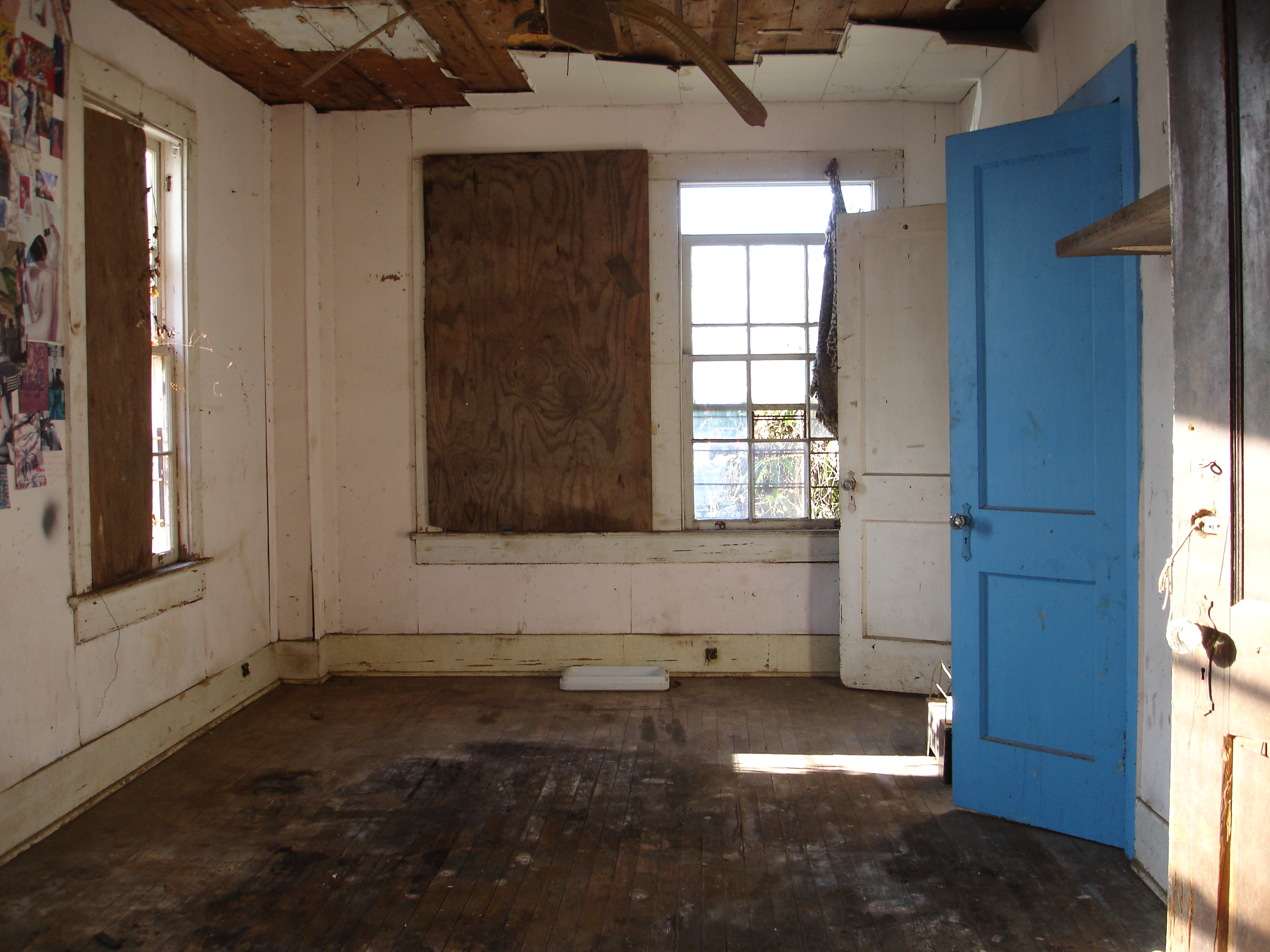 Here we have a college collage. College is (hopefully) the last time this decor can look good to anyone. 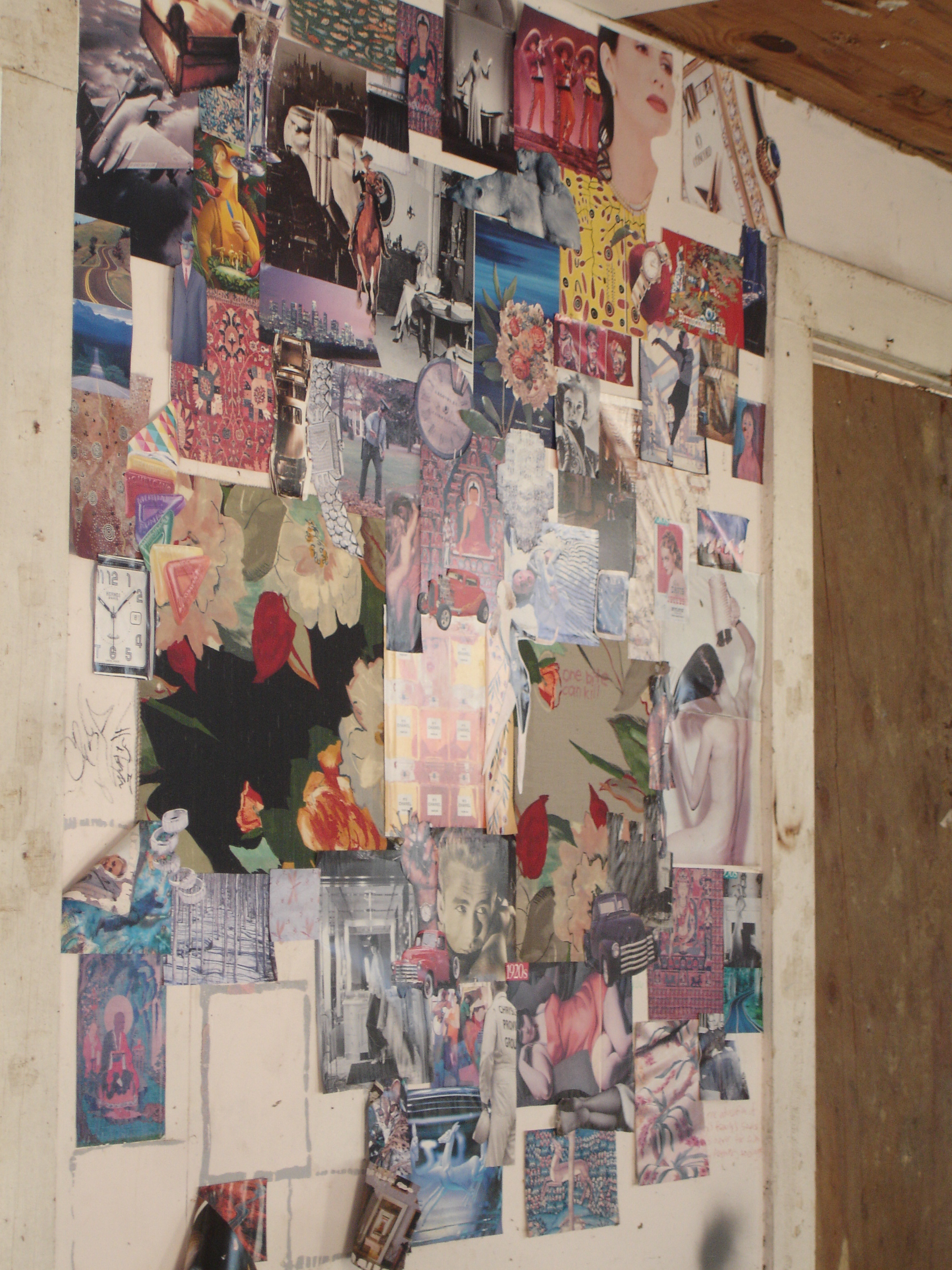 Note the bumper sticker: Don't Lay That Trash Louisiana. (That term for litter is a new one on me.) 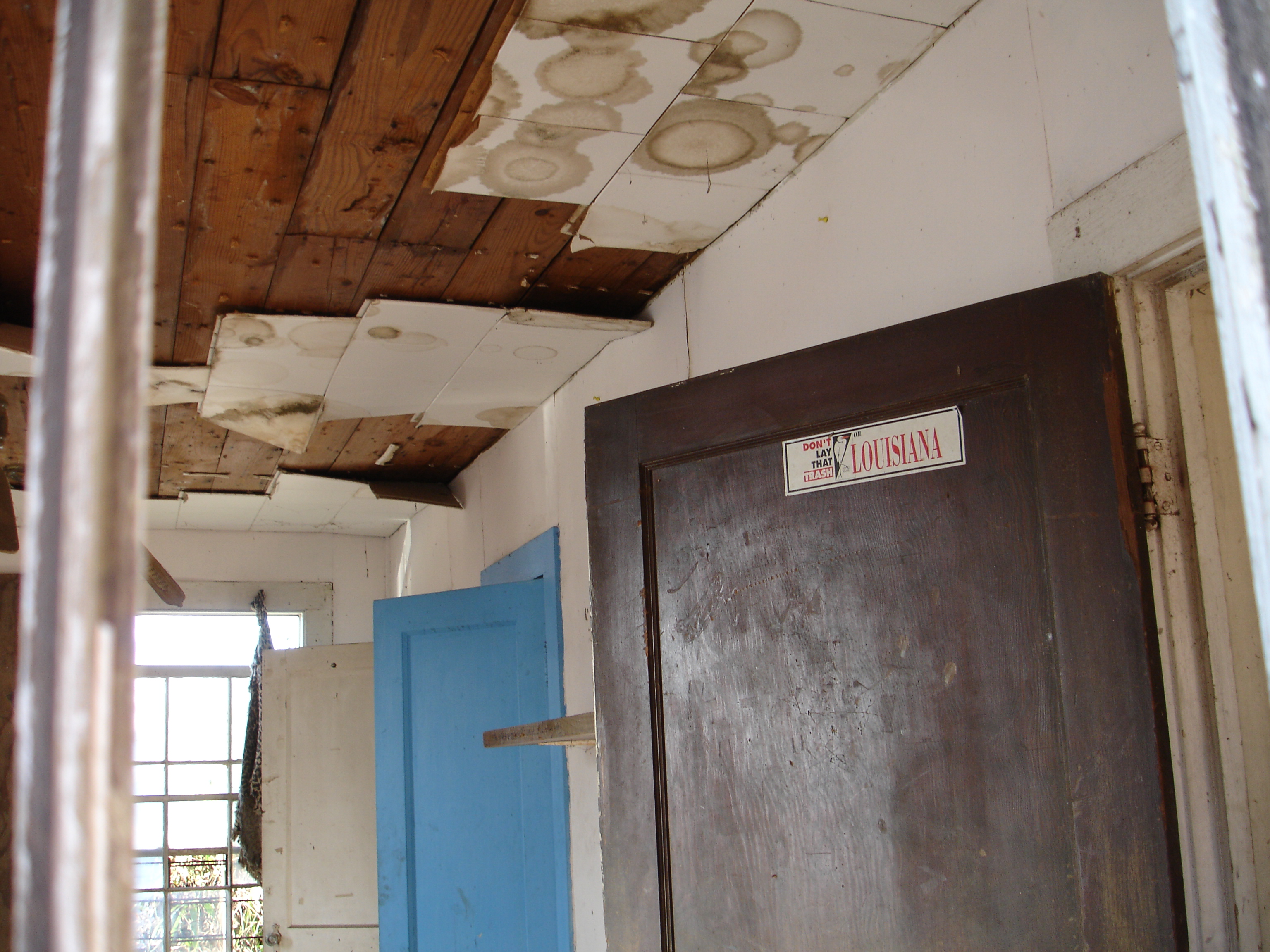 Moving on to the street-facing white building, I peeked in a first-floor side window and got a whiff of moldy basement. I have no idea what's going on with those fuzzy edges in the doorway below, unless there's a door there that was spray-painted black? 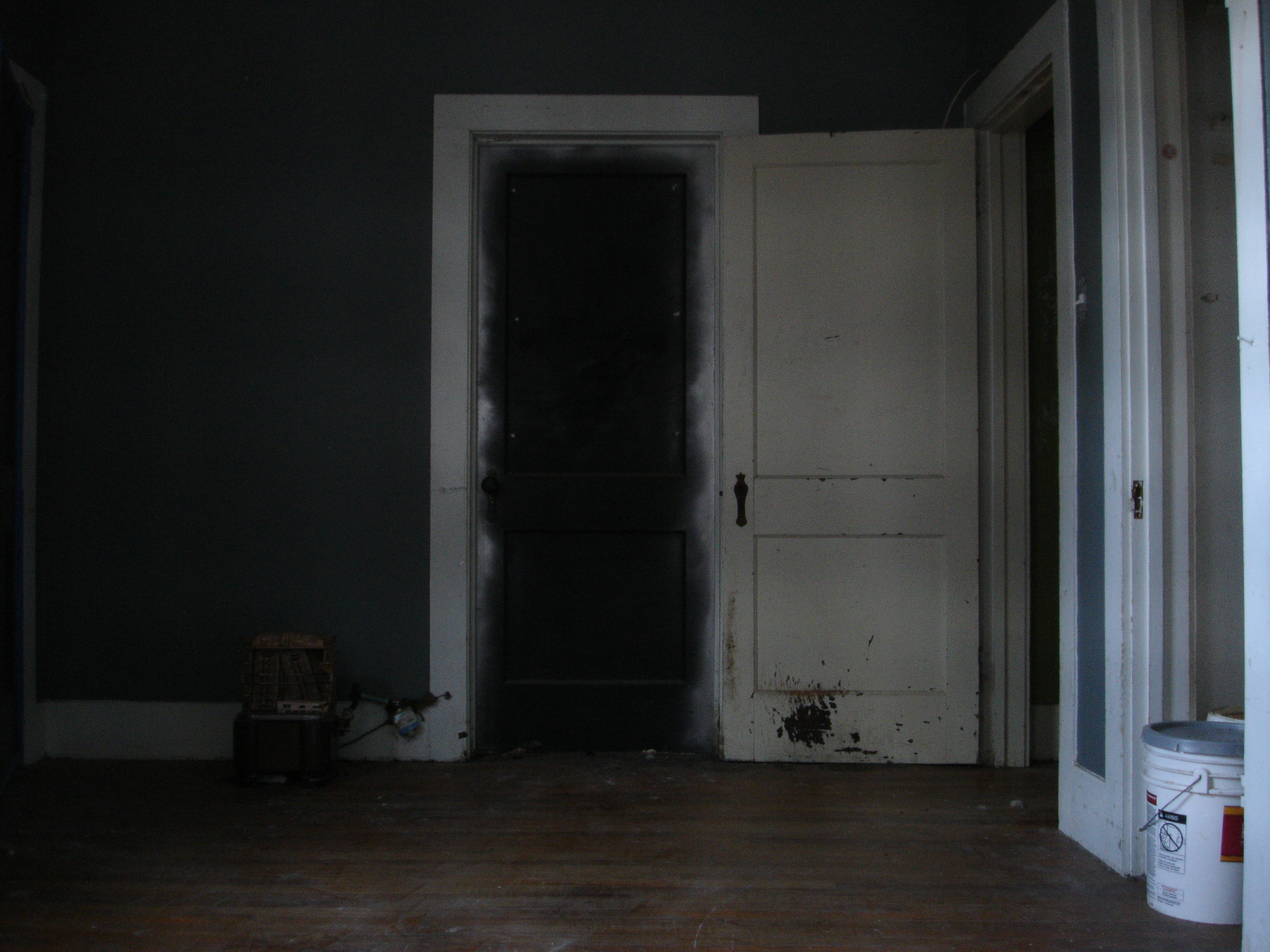 Below, a DIY cat door. 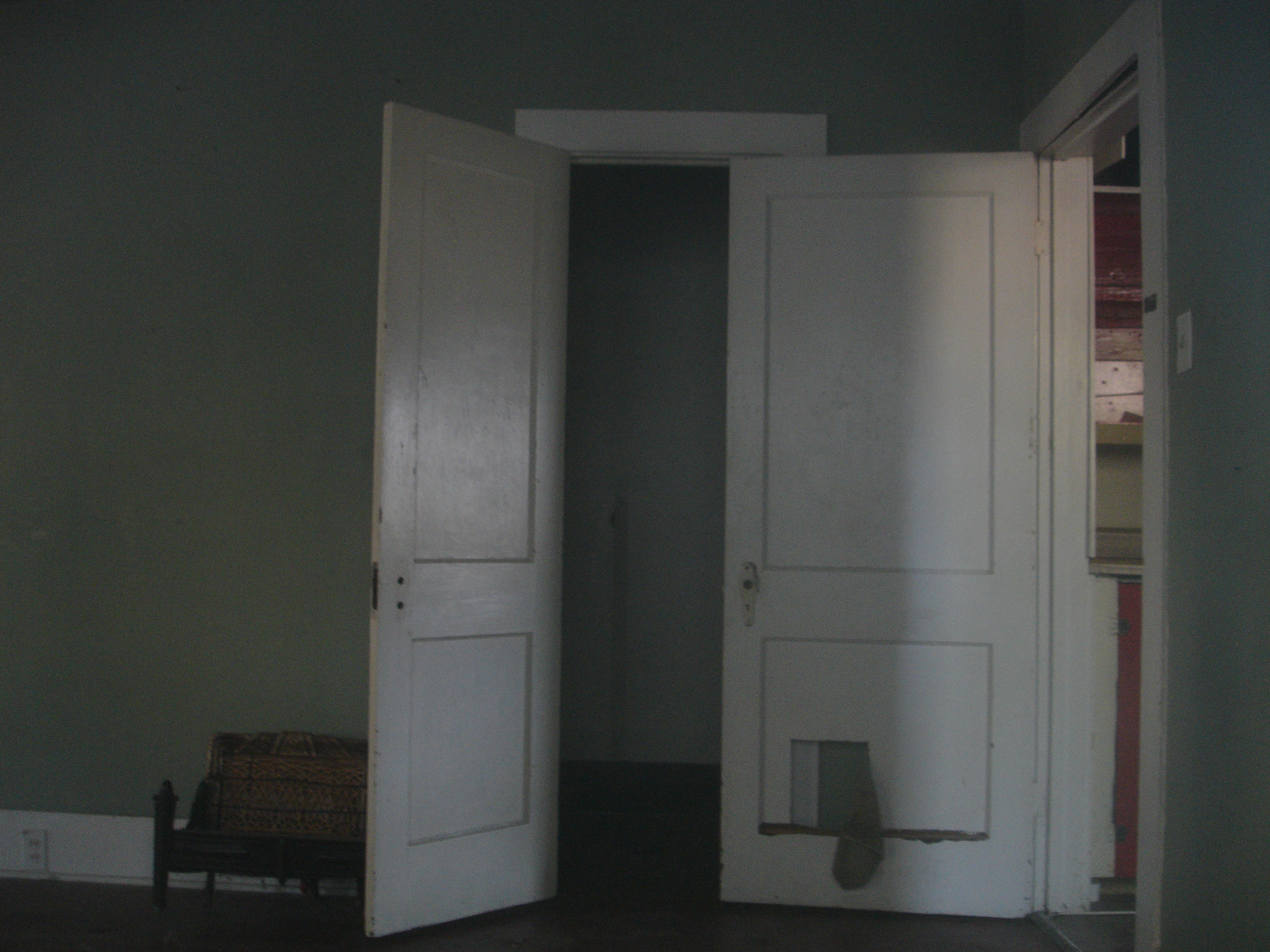 The next one is my favorite--sort of Dutch Masters lighting. 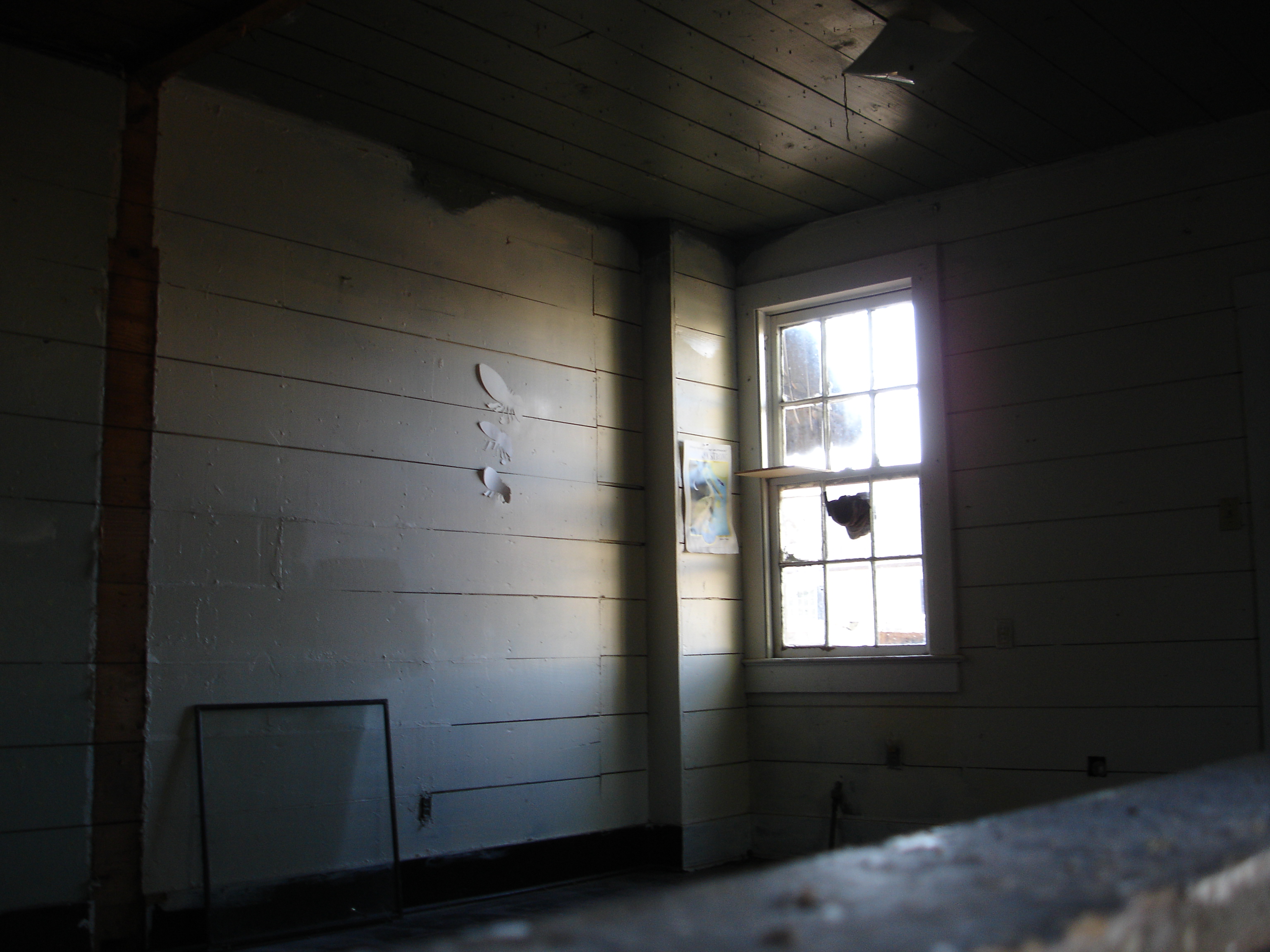 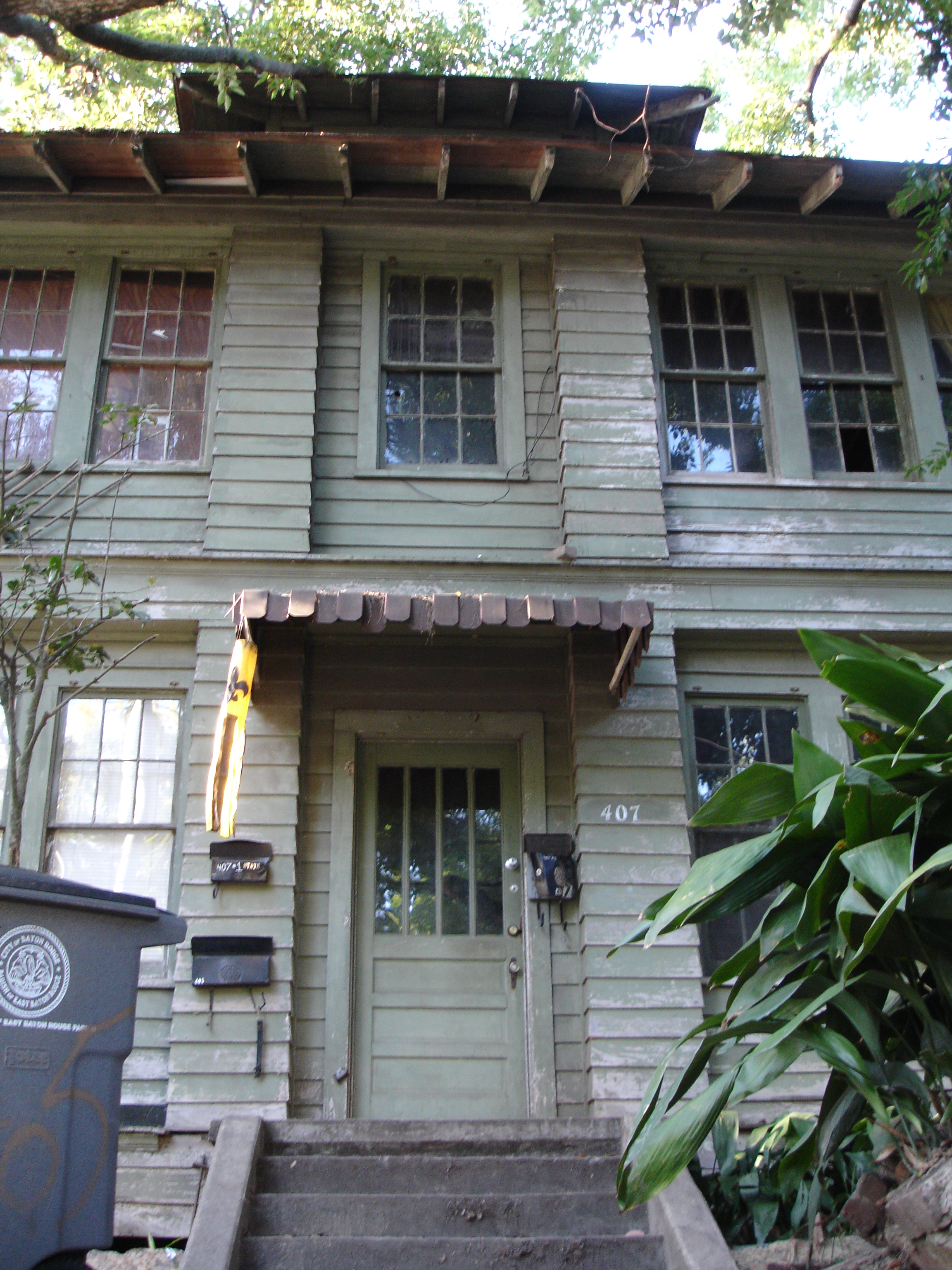 A few notes about ABR:

--I am probably the urban explorer who has entered the least amount of abandoned buildings compared to how many I visit. Many times the buildings are locked, but in a case like this where I could've easily gotten in, I was alone, so it's just a matter of fearing for my safety. This compromises the quality of the blog, I fear, because even at this particular site I was going faster than I'd prefer, to avoid confrontation. The times I can drag my husband out with me he gets impatient and complainey, resulting again in my going at a faster speed than I'd like. Sooo, Abandoned Baton Rouge is now accepting donations of weapons of self-defense.

--I always want to hear your suggestions of sites to explore...the last few unfortunately didn't pan out.

--I've closed the comments on this post because I'm not interested in further debate about State Street. Some people found my description harsh or unfair, but as I mentioned in my comment, I'm sure I would feel more fondly about State Street if I had my own college memories of the place. As it is, I'm in my mid-30s, I'm not from here, and find the street rather unpleasant to traverse (as previously specified), with some structures that could be nice if fixed up. I didn't even mention the gutter punks who beg for your leftovers (though now I have).

Excellent work, as always, Cokane, but I'm beginning to fear for your safety. Are you familiar at all with the concept of a "crackhouse"?! Just asking. Anyways, good stuff!

In my last year at LSU, I lived in one of those big, old four-plexes on E. State Street -- probably not the ones you photographed, ours had a flat roof and different windows. This was 1990-91 and the street's rentals were in much better shape, although still not kept up properly by the slumlord who owned nearly all of them, and who rented them on short leases pretty cheaply.

The fourplexes must have been duplexes or even single homes at one point, judging from the layout, and really nice ones ... the walls and floors were solid and a renovator could have made something beautiful out of them. So I can see the desire not to knock them down. It's sad to see how awful they look now; hope they'll be restored to something lovely, not just cheap student housing.

I hope for your sake that those workers weren't just salvagers trying to get copper pipes or whatever is able to be resold.

I know they seem scary and people think we were all a bunch of ingrates, but those houses and all the people I've known over the years who've lived in them meant a lot to me.

Here are some photos from Thanksgiving 2007 (6?) taken in the top left apartment of the green building:

This photo was taken in the kitchen of the same apartment:

You can also see some historic photos of the neighborhood that were collected by Clarke Cadzow and me over the period of several years here:

The Arbor Place (State st/Ivanhoe/Carlotta) and Campanile View (Chimes/State/Highland) neighborhoods are one of Baton Rouge's historical treasures, and I think it's a real shame that they're being let to waste.

I hope you won't mind that I'm posting this on Facebook.

It's sad to see those buildings empty and slated for destruction. I used to live in the apartments behind them and when we got evicted so they could turn them into condos, we heard they were going to buy up all of those buildings too.

The pictures are great!

I lived in one of these houses when I was going to veterinary school (class of 2005). The people I met on this street during those years are some of the most real and intersting people I've ever known. I was so sorry to have to move away and even sorrier that these houses may not survive. This place had soul. I now live in a "nice" apartment where neighbors don't speak to each other and people care more about HOAs and pet regulations than becoming friends.

Thank you for posting these pictures of our home. Now, time to question my sobriety and raise a glass to State Street.

hey! author of this article.... youre a fucking prick! Instead of talking about how your precious little feet had to endure a walk down the filthy state street, why dont you talk about the fact that these were some of the first building to be erected in the lsu area or that all of the people living there were evicted by the new buyers so that they can tear down these GREAT buildings to build more condos or maybe a parking lot so some piece of shit LSU football fans can park their hummers.

Thanks everyone, except obviously the commenter above. Looks like a red-faced shirtless guy from State Street has learned how to type some cuss words.

I'm glad its apparent to most other people here that in general (and in this case), I do appreciate the buildings I show on ABR. I don't have the sentimental personal memories of State Street--Thanks to Trey for the links to his photos inside those buildings, and the historic ones. So to me it's a dirty street that's not pedestrian friendly. Just being honest. And I wasn't making up that bit about the underwear on the dirty sidewalk, it was there for weeks if not months.

People can say what they want about the Geaux Tigers Palace Apartments thing, but they should also notice where the only kept-up sidewalks on the block are. I suspect now that they've bought those two houses, the sidewalks there will also be repaired.

I'm glad to see someone feels so passionately about the neighborhood and these buildings. Maybe some of that passion could be directed at helping to have this designated an historical district? It meets all of the qualifications.

Also, could you grab those undies for me? I've wondered where they'd gotten off to.

Haha... found a little Easter Egg in one of your photos:

I wouldn't have pegged you for a thong guy!

Screw that guy from up above who had all of that negative stuff to say about cokane and our beloved blog.

i spent several years as a red faced, shirtless state street drunk. i lived in several buildings in the area, including the ones in your blog. one of them was a practice space for my band. i'm not going to insult you or leave some angry rant, after all, you're looking at the area as most outsiders would. i just hope you realize that in spite of all the dirt and grime, the rampant alcohol and drug use, and general craziness of the area (at least at the time) this was a genuinely fun place to live. thanks for taking an interest.

The properties that have been photographed are being restored.They will once again
reach their potential.Many good things are in store for East State street.The corner has been turned.The parish authorities are
making plans to contribute to all of our efforts to make East State street the BEST
that it can be.It is exciting to see the
plans and progress in the works.

I realize the party's over, but I forgot to mention that the actress Elizabeth(Ann Cole) Ashley lived upstairs in the house on the right when she was growing up.

I drove down State street yesterday and major changes are being made.
The old buildings are regaining life.
The sidewalks that have been installed as well as the street lights are awesome.
Way to go!

"When I finished these photos around 5 p.m. yesterday, one red-faced shirtless man was past the questionable stage and was on his way to rip-roaring drunk."

I lived there from 1998-99, with a mix of college students and older working people, and I have to say I thoroughly enjoyed the experience. I don't think I've lived anywhere else where porch-sitting was so rewarding or relaxing. As it was ten years ago (I moved away from Baton Rouge that summer), the desirability of the neighborhood may well have changed, but I never recall any problem between the student population and "others." It was actually something of a selling point for me. I have mixed feelings, to be honest, about the "urban ruin aesthetic," but as a Louisiana expat, it's interesting to see these pictures from such a perspective. Thanks for posting these.

Drive down the street.Or better,walk down the street on the NEW sidewalks at night like many NEW residents of the street and area doing while enjoying the NEW lighting.
We ARE cleaning up the street.
Come check us out.
Out with the old and in with the NEW.
Many possitive things are happening.
Historic Arbour Place and Louisiana Terrace
are BACK!