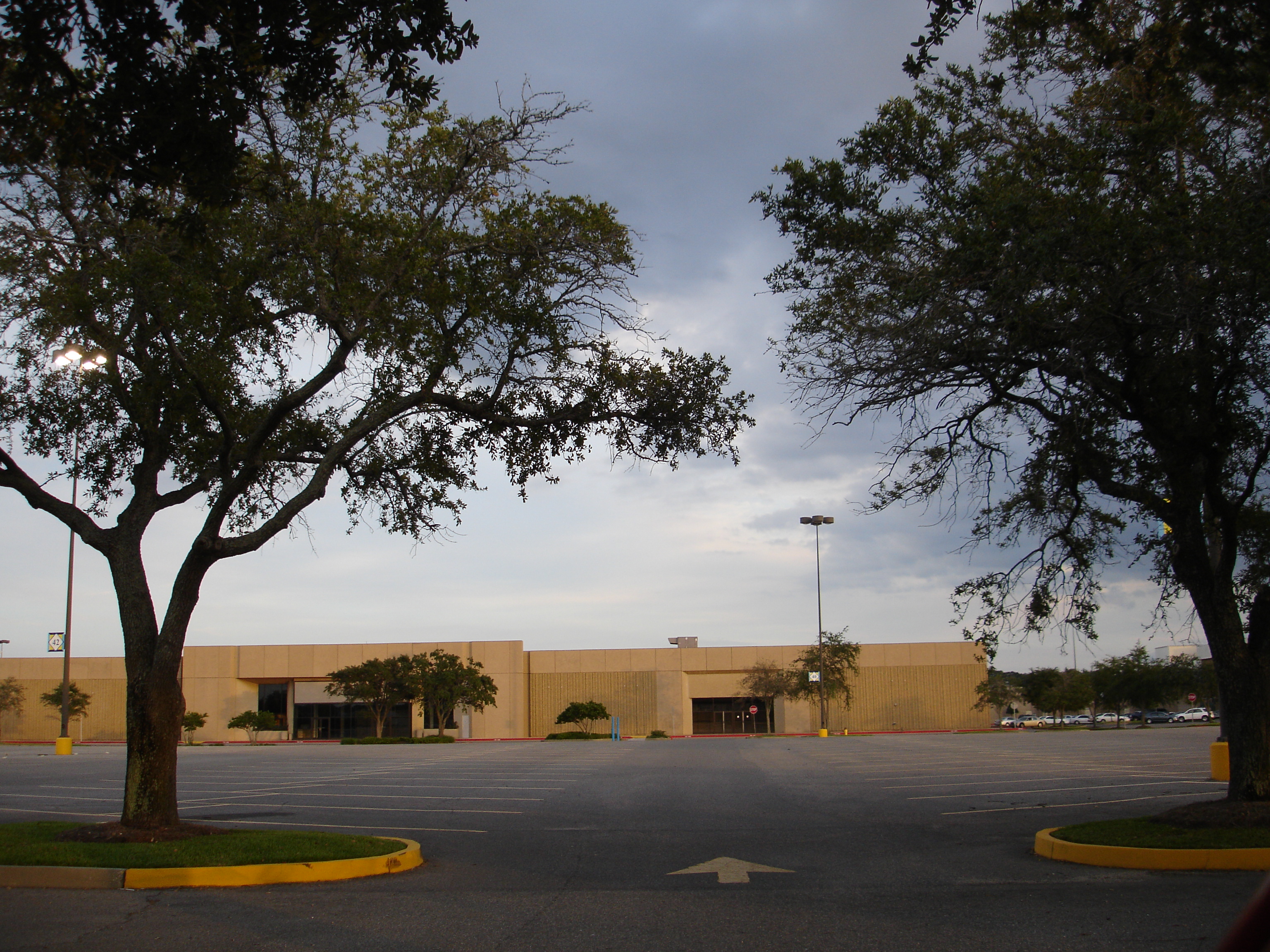 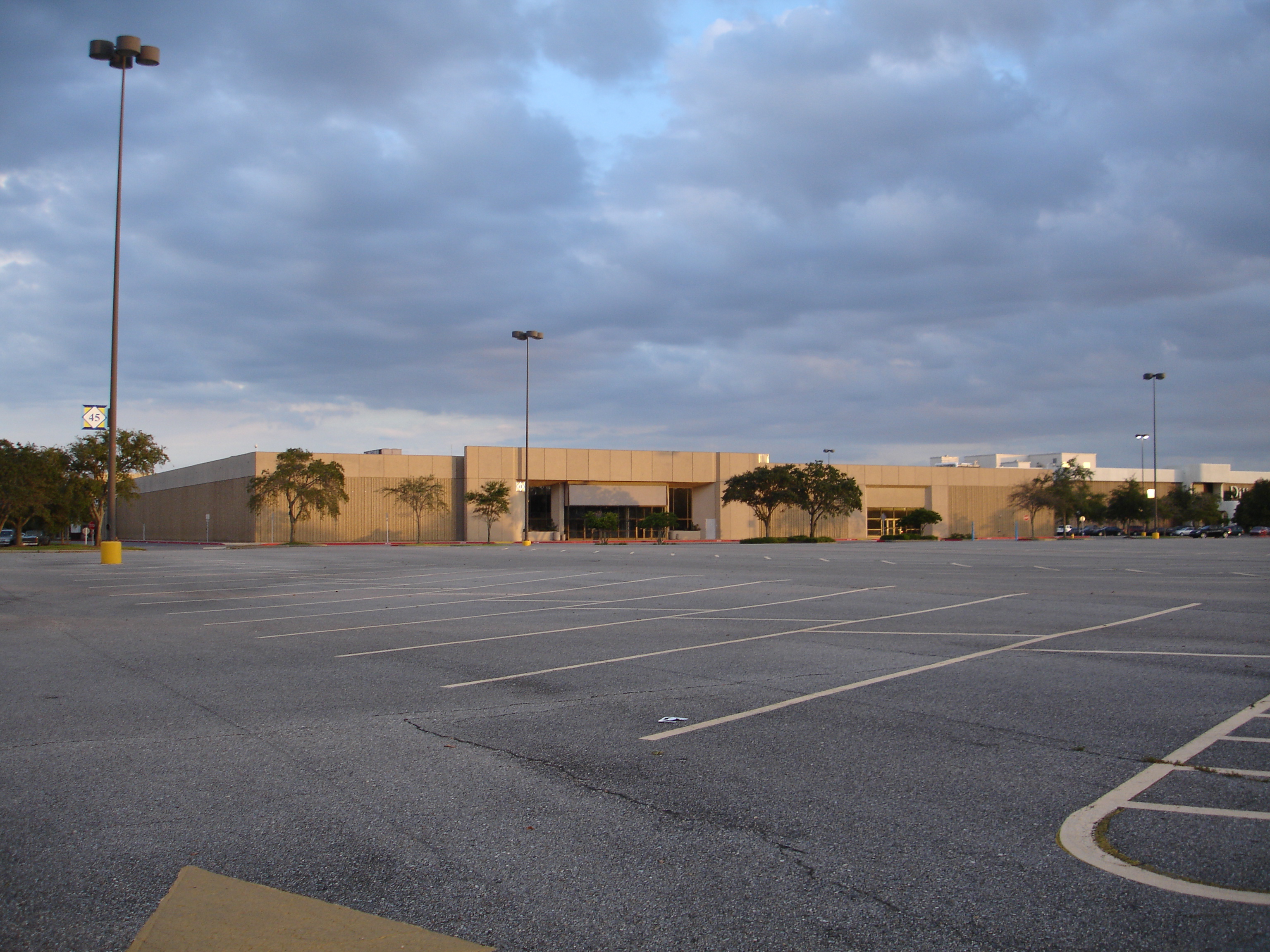 A subspecies of the urban explorer set are people into dead malls. Coming from the land of malls myself, New Jersey, I've got dead mall exploration in my blood and would love to get a chance to get inside one. So imagine my interest on spying one wedge of Cortana looking abandoned.

Cortana Mall, er, uh, "The Mall at Cortana" a name adjustment which rings false even to a newcomer like me who hasn't been inside the mall, isn't yet a dead mall, but like a lot of suburban shopping complexes these days, it's not doing great. I think I read somewhere that it's at about 70% occupancy, and no one really expects that number to rise.

This is just a brief post concerning the former Steve & Barry's University Sportswear.

I rolled up to the main door and began snapping away. 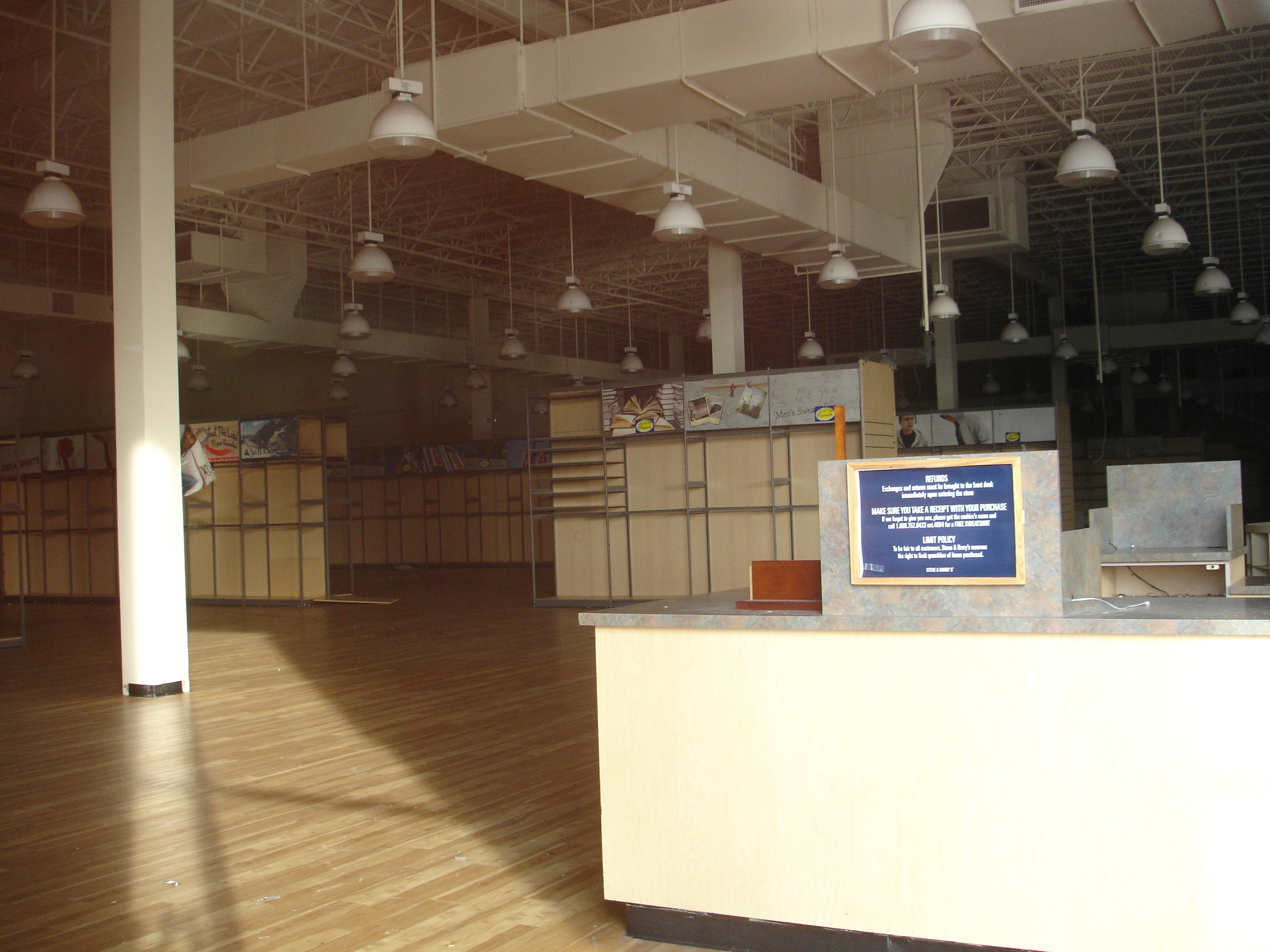 Apparently the designers of this store felt no need to disguise the air vents or drop a ceiling. Thanks for dressing up, Steve & Barry's University Sportswear! 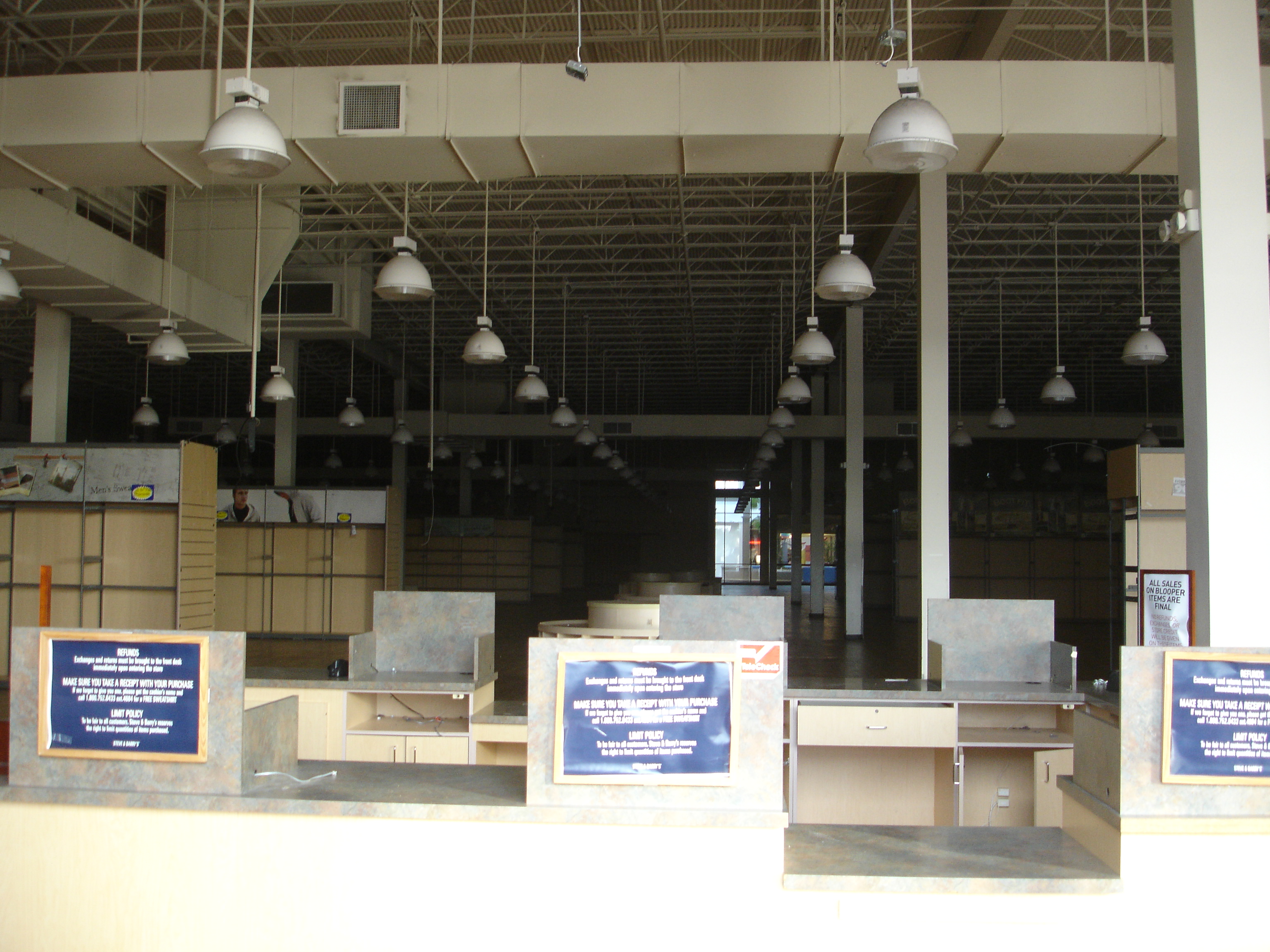 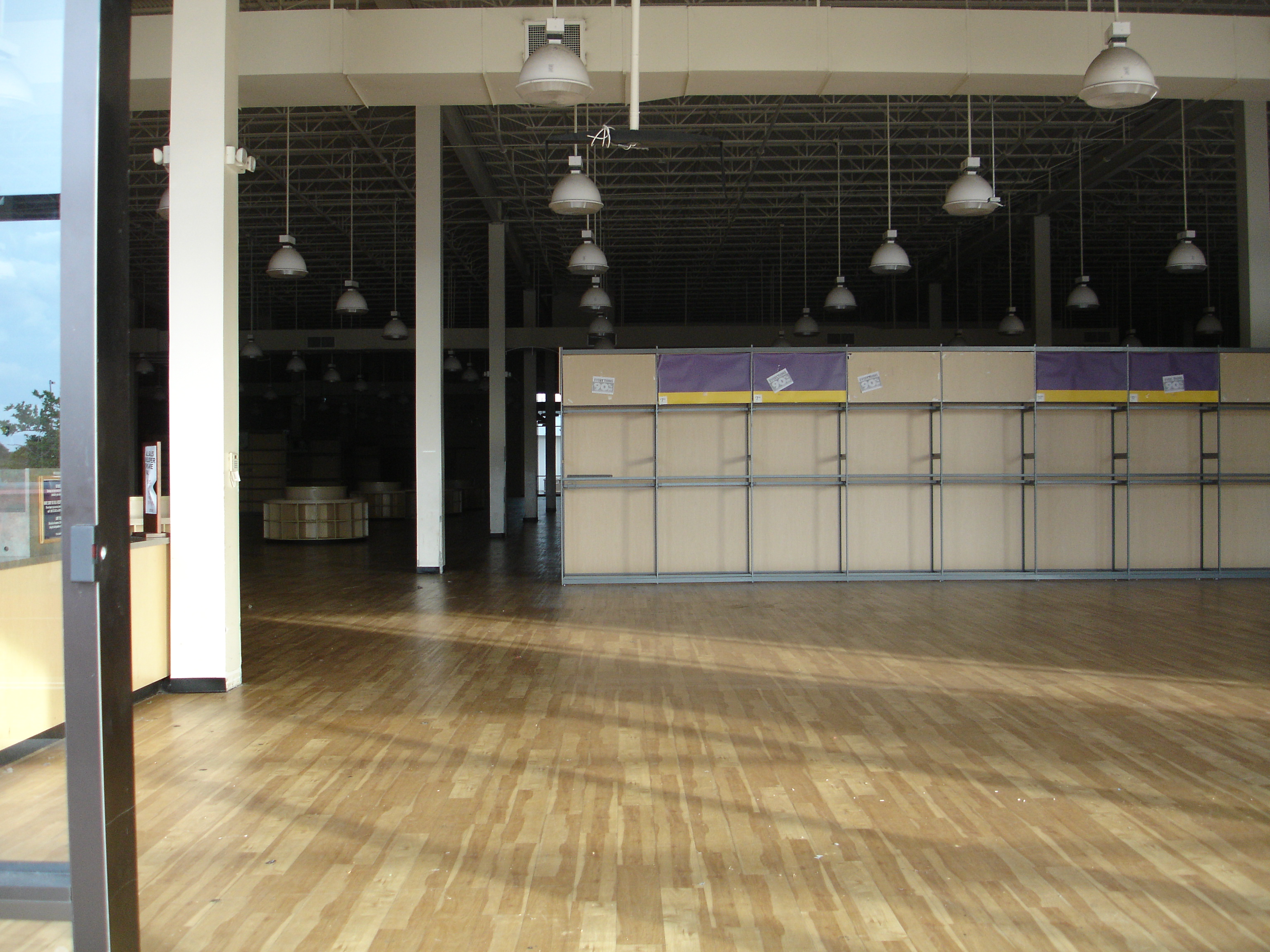 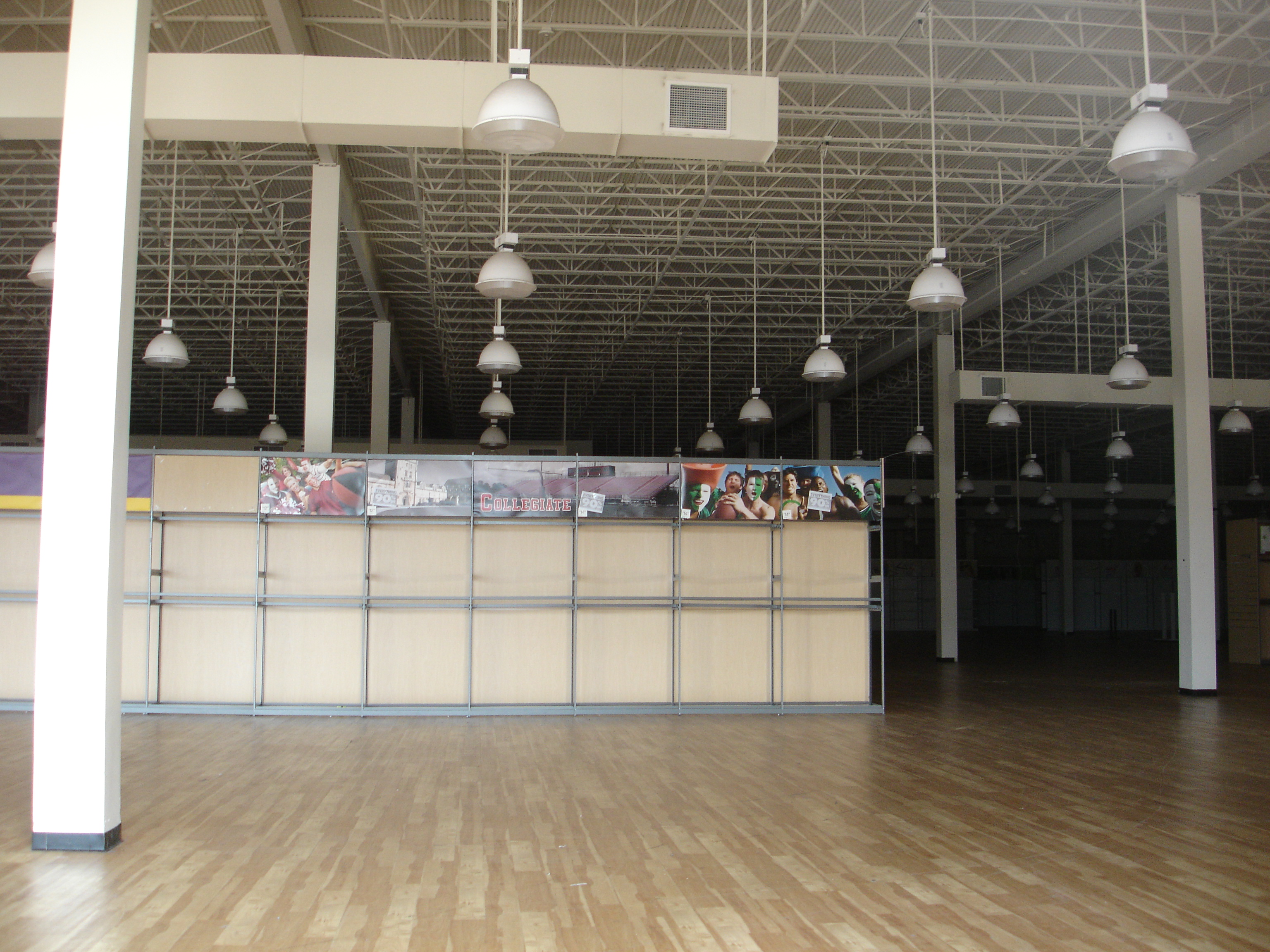 I hadn't been there but a minute when a white security SUV pulled up, and was met by a guy in a sportscar who wanted to talk to the security guard. I took that as my cue to leave, looking sketchy. It was just faster that way.

I went about my buisness at one of the outlying stores, but at this point I'd only taken interior shots. I returned on my way out of the mall for the exterior shots from afar. Then I decided to do one last roll past the doors to the store in my car to squint in at a sign and make sure I had the store name right.

The moment I slowed down by the windows, along came the guy in the sportscar again, from out of nowhere crossing the empty lot to me. Then I realized he must have called security on me the first time. What, does this guy just sit and guard the store all day? Was he Steve and/or Barry? He reminded me of one of those little satellite fish that eats plankton off a shark or something, or those white birds that are always around cows. Okay then, sir. You can have your empty Steve and Barry's store. Enjoy.

Yes! Love it! Dead malls rock! The top two exterior shots, showing the empty parking lot from off in the distance, are awesome. These abandoned malls come off so apocalyptic! You really should treat yourself to the inside of Cortana at some point; plenty more abandoned storefronts inside. The last time my wife and I went inside, I think I drove her nuts mentioning your site so many times!...Just be sure and go during the daytime, preferably on a weekday. Just take my word for it...Otherwise, keep up the good work!

If I remember correctly, this used to be an Old Navy store. Maybe that's the reason the ceiling looks that way?

It "Steve & Barry's" used to be a Service Merchandise store.

Service Merchandise? That's funny. As I mentioned in my post above, my wife and I were at Cortana back in the Spring, and I remember looking through the shop windows from the inside of the mall at the interior of what used to be Service Merchandise. I had no idea the Steve & Barry's chain ever occupied that building. That place was fairly huge to house only a men's clothing store, no?!

I remember this store was all the rave in 2005. I had so many friends who worked and shopped there. People loved it when I was in high school. I think there clothes were at a cheap price point, and then they steadily rose or something like that...

That space in Cortana Mall originally was Wilson's (H.J. Wilson Co.) and was bought out by Service Merchandise in the 1980s.

The progression has been downhill all the way. Wilson's was nicer than Service Merchandise and etc., and so on.

If my memory is holding up, another former Wilson's location has made it into ABR:

And this is where Wilson's moved to on Florida (5901 Florida) before going to "the mall":

Wilson's, I think, may have had this location AND the Cortana location for a while.

And three blocks east on Florida (about 6287 Florida) on the north side of the street, you'll see a big mid-century modern building of 1964-ish vintage. That was Sears before it moved to Cortana.

It may or may not be vacant now . . . it had been state offices for a while. Before Sears moved there, it was downtown where the Shaw Center now sits. I took some pictures of that, etc., back in 1981 as a project for a photojournalism class at LSU:

I went up to an abandoned car dealership one time because I saw a sign posted on the door. The brand-new dealership had only been open one month before it was completely shuttered and all the cars were gone. The sign said that it had been closed for tax violation or something. A grumpy guy in an SUV pulled up and barked at me, asking what I was doing. Like I was going to steal something from an empty car dealership?

I think I went in that place exactly once ... to walk through it to the parking lot.

IMO, 70% occupancy for Cortana Mall is being generous. It's getting to be like a ghost town in there. Every time I go in, something else is empty.

I actually made up drinking game rules for the place a few years back:

1. Drink when a place is out of business.
2. Drink again when no one in your group remembers what it was before the store closed.
3. Finish your drink if you find a place selling grills (the mouth jewelry).

Fun fact: Rule 3 was just supposed to be funny when I made the rules but I'm pretty sure it applies now.

Columbus Square Mall in my hometown is also a dead (and now disappeared, because they tore it down and built a new library leaving the lovely old library - abandoned) mall. It was one of the first indoor malls in GA. Sadly it closed due to "crime and violence." Seriously. Old folks who would go there for their early morning exercise walks were gettin mugged. And worse, causing the retailers to pull out and leave the mall empty. Very sad. I remember going to the Woolworth's in that mall and having apple pie with a slice of cheese. I miss Woolworths and lunch counters. Crap, now I sound old.

I think this location used to also be a Mervyn's at one point. That used to be the good mall back in the day when Delmont Village and Bon Marche were safe to drive by. I haven't been to Baton Rouge in a long, long time, but that mall (Cortana) and Leo's Skating Rink down the street were my baby sitters for my entire childhood.

this place is back in use as a local campus for virginia college.

The location is perfect for me, and the parking space looks kinda huge. Too bad, it's almost closed already. Wish they could have better facilities and an interior design, so it would be more appealing to the customers.

Is this because of the recession? Terribly sorry for all those that lost their jobs.