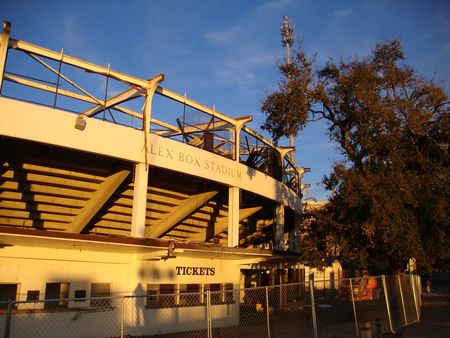 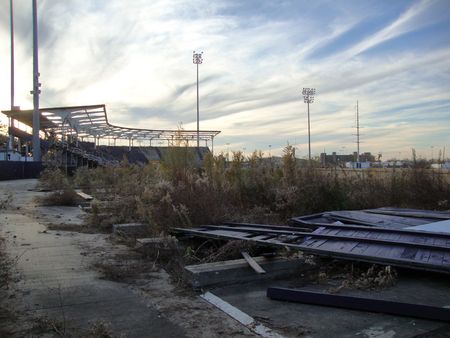 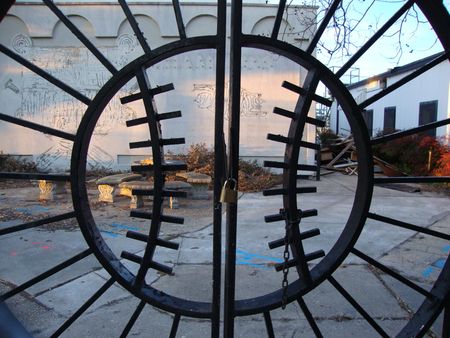 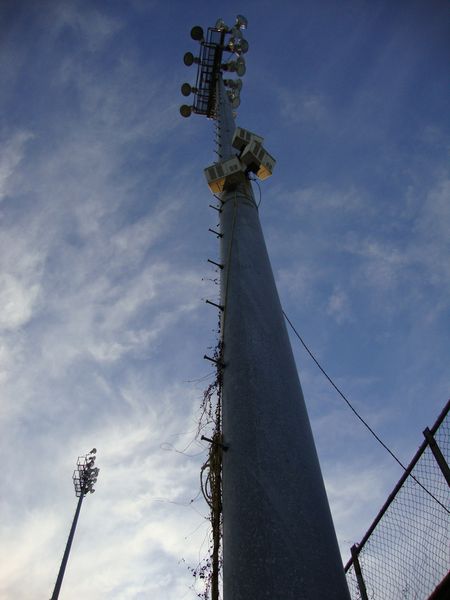 The LSU Tigers played their final game here in 2008, and now this stadium is on deck to enter the great hall of fame in the sky. The replacement stadium has already opened just down the way. 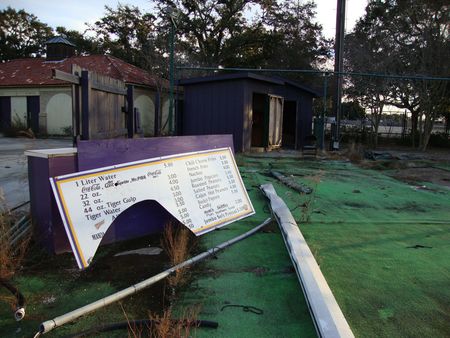 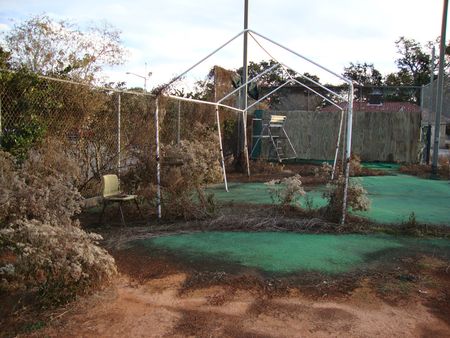 A NO TRESPASSING sign is posted, but the chain-link fence only goes about 3/4 of the way around the field. Sooo... some of the photos taken from within were shot by a very trustworthy hobo who didn't mind bending the rules to help a blog, which I explained to him is like a magazine I write on the television typewriter. I paid him with a sandwich. He was too scared to go all the way up into the risers. I told him he'll never hop a boxcar that way. 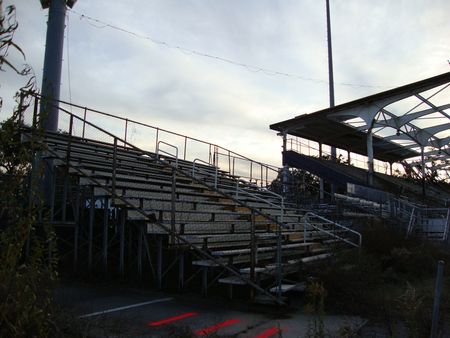 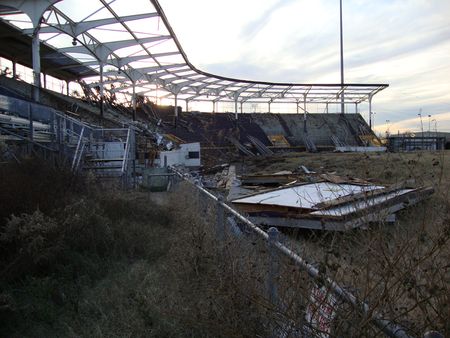 A prominent feature of Alex Box was The Intimidator, a billboard on the below framework on the right, depicting a colossal snarling Mike the Tiger head. 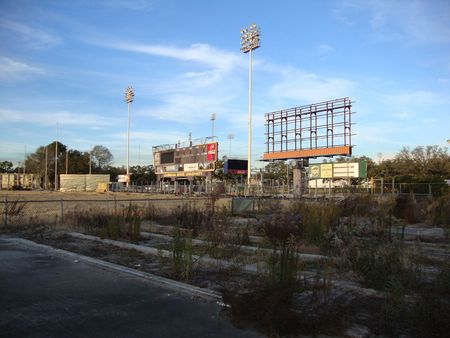 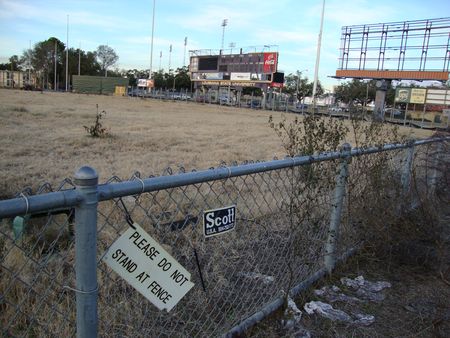 Back to the left behind the seating area, with a slice of Tiger Stadium in the background... 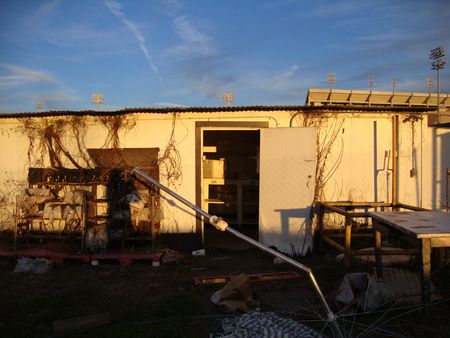 A windfall of benches fills one of the entryways. 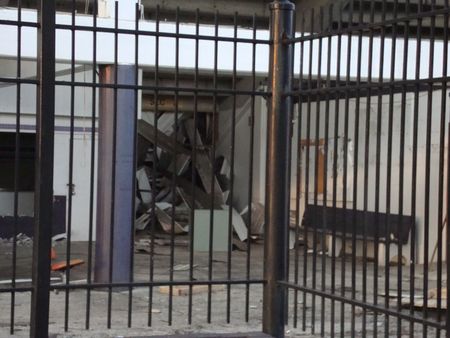 In the apocalyptic view below, I can't help imagining a pack of zombies running in through this flame-colored entryway. Play ball! 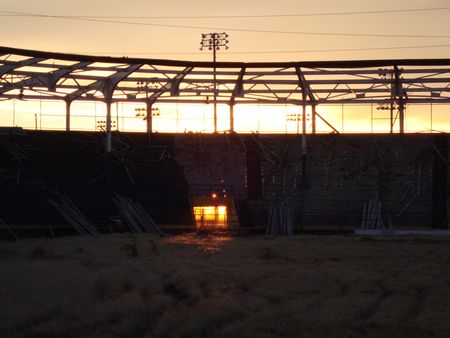 Some seats, benches, field dirt, and other souvenirs of the stadium are for sale and auction at Alex Box Auctions for a limited time only! Hurry! The auction for the box office ticket window grate ends January 14! What will you do if you miss out? You would have to wait for the next scrap they pull out of this pile: 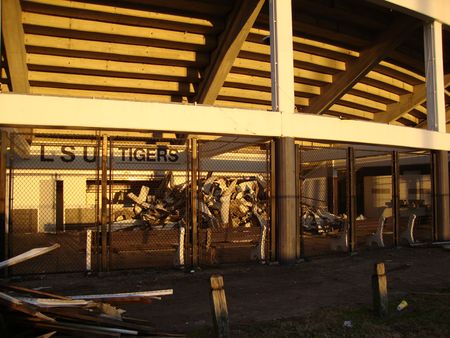 From the description copy for the ticket window grate auction: "has a great old-school look to it and will be a great conversation starter." I can imagine the conversations!

HOBEAUX: You mean you bought that piece of scrap metal for $150?

[Hobo throws himself from top riser of stadium, dies.] 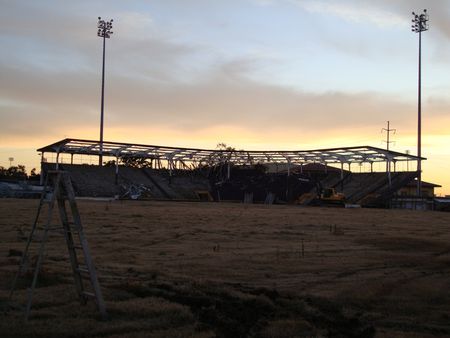 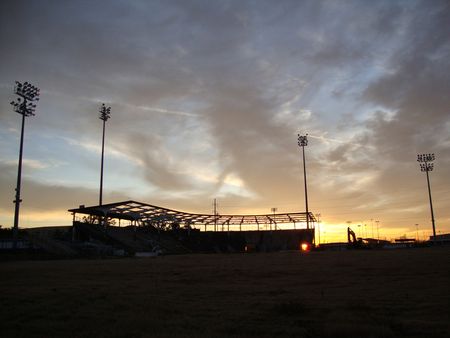 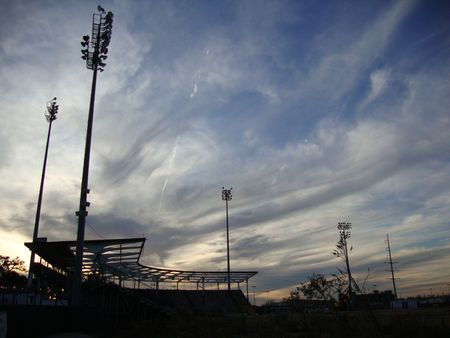 Oh my! I had no idea this had been allowed to happen. What's wrong with us people? Guess I just don't understand ... progress?

kane, you have outdone yourself with this one...absolutely superb reporting!!!

Tremendous piece, and yes, I immediately added you to my Facebook page. Enjoy the new camera!

RIP Alex Box. I went to baseball camp as a kid there with Skip Bertman and learned a lot. Your pictures here are beautiful here no doubt but if your intention was to capture gloomy you got that too.

oh what happened? sorry to hear this. but i like the way you capture this scenarios.

The sea can accommodate all, so we just to see the sea, our heart is infinitely more freedom and broad!

Ah, yes...let us who almost universally feel New Orleans has a serious litter problem jump all over a representative who actually suggests doing something about it because we don't like her politics. And yes, I DON'T like her politics.

OMG! This post breaks my heart. I used to see dozens of baseball games with my dad here growing up. He passed away 2 years ago. Just reeling from the pictures of this site!

It might take 10 minutes or 20, but that mess won’t be there for the next person to have to deal with.

Americans will have to have a civil war or revolution based on poverty like in France or Russia before such an extreme system as has developed becomes tabu (like a strong currency is aboslutely necessary in Germany due to perceptiopn of inflation bringing down Weimar Republic for example).

Thank you for sharing. Very happy to see your article, I very much to like and agree with your point of view. Have a good time.

Man I miss the old Alex Box even though the new one is so incredible. You really should reopen this blog and post some more. You take great pics and I always stumble in here.