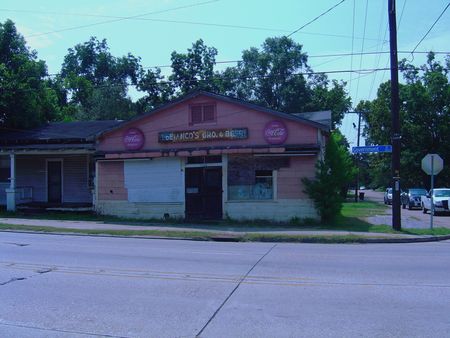 It's Friday, so you know what that means (no you don't, yet)-- It's time for ABR's new regular feature, Best Comment Ever!

For this week's month's Best Comment Ever, we're going all the way back to a post from 2007 when my old camera Old Blue Eye made everything look blue, and a storytelling comment which was left by commenter Jay in 2008. The post covered LoBianco's Grocery, among other Government Street buildings.

Friends of mine who, er, know these things say that LoBiancos spent its last years as a front for gambling. A former neighbor used to be a frequent visitor, allegedly.

One early morning I was in the street chatting with another neighbor, when we saw our alleged gambling neighbor walking home. He was wearing a suit, and walking in small steps, a la Tim Conway on the Carol Burnette show. My friendly neighbor saw him looking good in a suit and projecting her voice said, "Hey, you look great, where have you been?" He held up a hand to his ear to show he couldn't hear, so she waited until he got closer to repeat.

But as he got closer, we could see he has sticks and leaves in his hair, and stains and smudges and other potentially unspeakable filth all over him. My now shocked neighbor asked her question, but dropped the first part and asked a gaped mouth "Where have you been?" His reply? "Heaven only knows."

He walked on and my neighbor and I agreed that was a true statement, although I was much later told that it was probably LoBiancos.

A slow clap for Jay.

If only this person in question left a followup to this. I'd love to hear the whole story.

That was pretty much the end of that event, we never learned any more about where he had been. We didn't bother asking either, he provided far more good material than just that day. He is clinically schizophrenic and depressed, which is just not funny, but he just does things that, when you allow yourself to forget about his bad mental health, are just hilarious.

Somehow, with no money (all his needs were provided for by his sister) he got a hotel room for a week, a line of credit at a liquor store, a taxi that would take him anywhere, and the use of a used woman. She had decided he must have money, so she married him. His sister then paid her off to get a divorce, but that is not at all what the sister complained about. Nope, when she told us all about it, she said in her beyond Scarlet O'Hara voice, "Can you believe that woman, I mean, he had not had a bath in over a year!"

Thanks again. I nominate your smash up derby entry for next month.

PS. I saw your name on the inside cover of 225, congrats.

The garages are currently being used to store mattresses and bags of mulch.

wearing a suit, and walking in small steps, a la Tim Conway on the Carol Burnette show.

This is the best article I have ever found on the Internet.