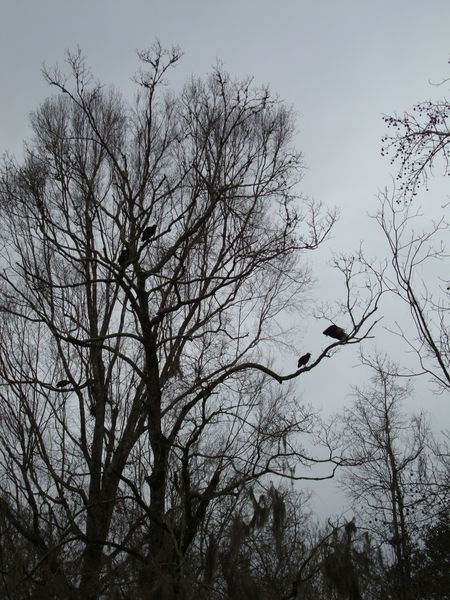 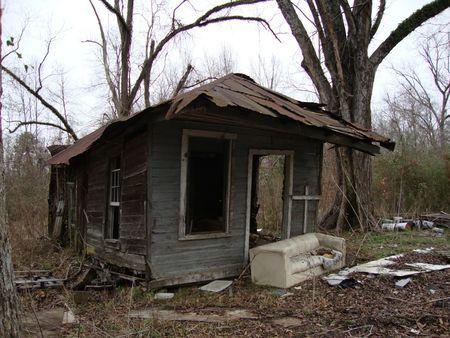 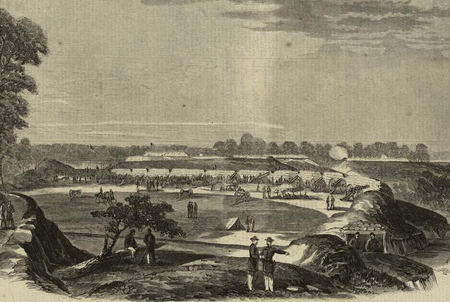 They look like mounds. That's them at the tree line in the next two photos. 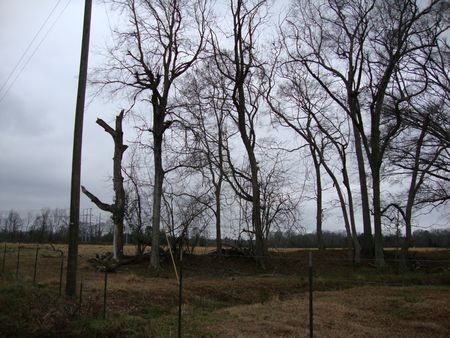 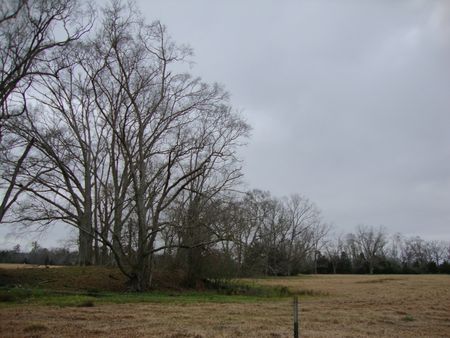 Another battlefield remnant is this citadel, which I believe is also referred to in battle descriptions as the Rebel Citadel. 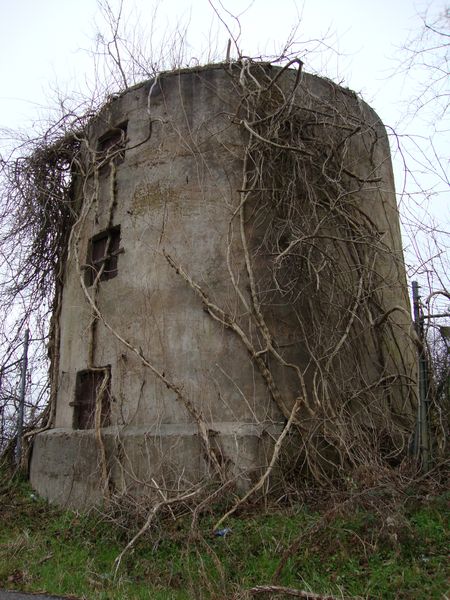 And for good measure, various abandoned houses [below and the second photo in the post]. 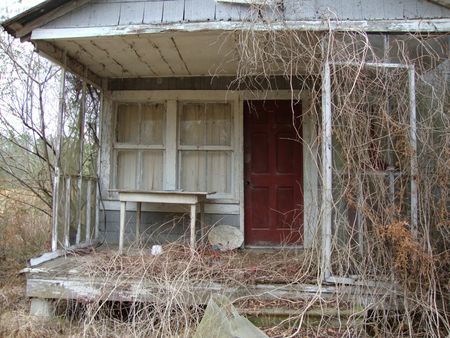 Here we have a Civil War monument on someone's quaint fenced property (with cute goats in assorted colors next door). I've never encountered a picket fence like this that looks like it was made from scratch. 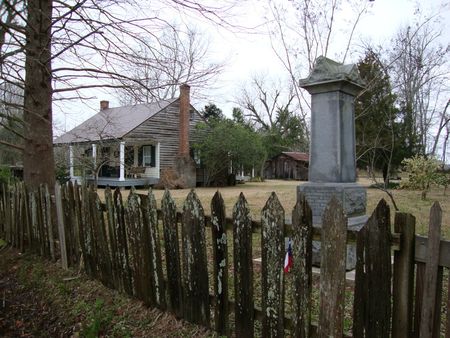 Next, we stopped at an abandoned church located on the far edge of an expansive field. 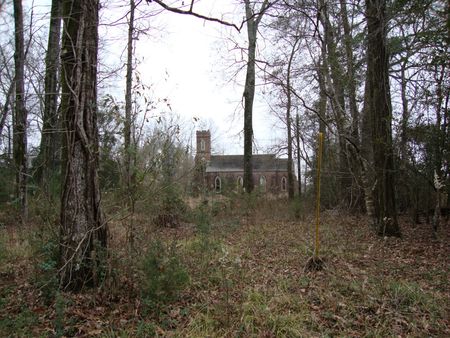 As we approached, we saw four to five large vultures roosting atop the belfry. They didn't seem to appreciate our presence and flew off as we arrived. 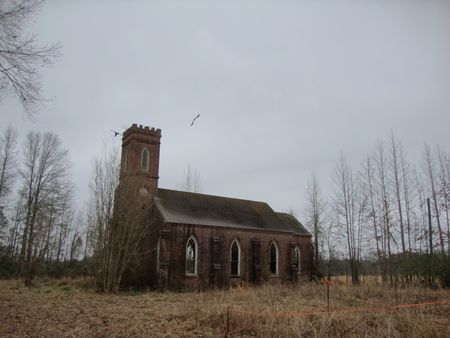 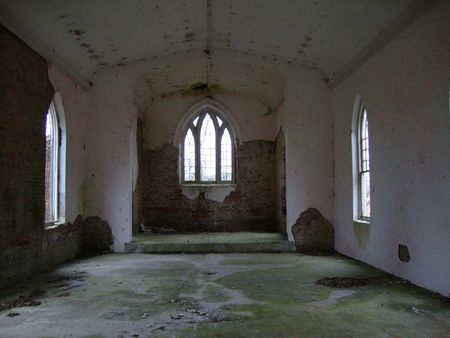 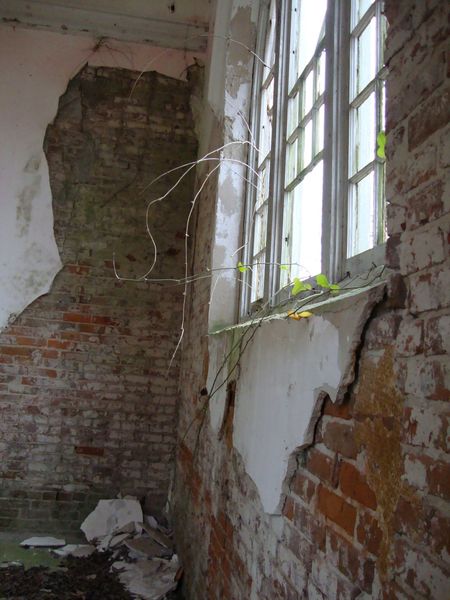 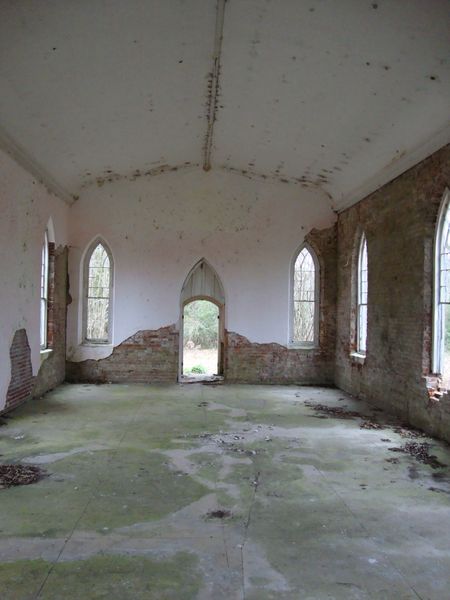 Not much going on inside the church. But hey: abandoned church in the middle of nowhere! Next, we stopped over the border of Mississippi at the Pond Store, which has been open since 1881. 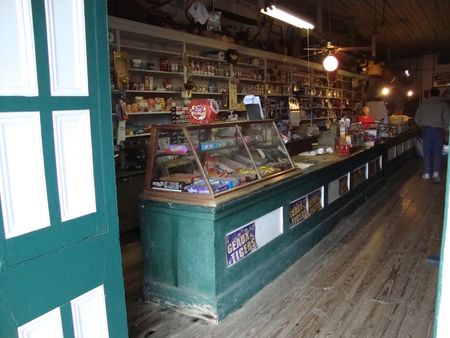 We found warm company on that cold day with the chatty shopkeeper and a wood-burning stove, where two cats and a dog soaked up the heat. 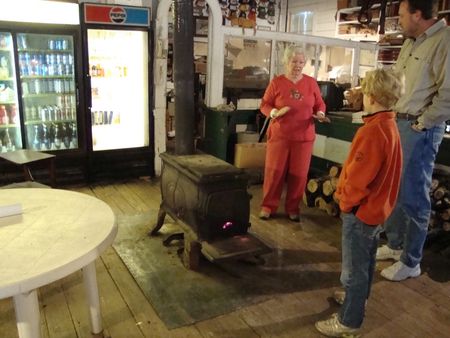 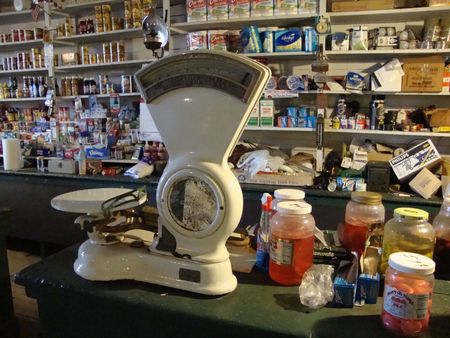 The Pond Store still has lots of period details, like the original cash register and the wood box it came in (which miraculously was never tossed into the stove), display cases, and this olden scale (for weighing your pickled eggs?).

On the way back, we passed more of the area's extremely active vulture community. It was not the cheeriest of days, but one not lacking in points of interest. 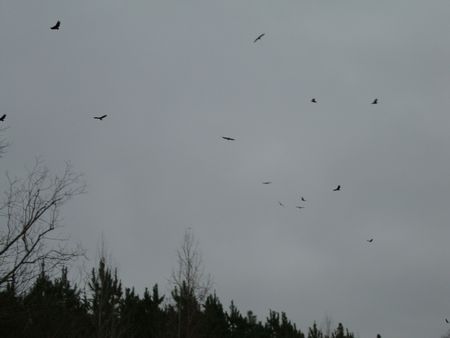 If you like the antebellum theme, when I was at LSU in the '90's, there was what looked like the remains of an abandoned plantation house on River Road, just a few miles south of Baton Rouge. It's on the left side of the road as you head away from BR right before a large curve/bend in the road, virtually all that you can see is a set of columns (some of which have fallen over) and (at the time) a sugar cane kettle. Cows have free run of the place. It isn't more than about 15 minutes or so south of the campus. I've always wondered what the history of that place is.

Scott, it's still there. I covered it in a post about River Road in I believe September 2008. Lots of information about it online, I think I linked some in the post.

Ooohh, the vultures were out in force weren't they? ;)

Love, love, love the church pics....and I could use some time in front of the Pond Store woodstove today@

Flippin' sweet pics, Kane! That old abandoned church rocked my world! Love, love, love those shots of the interior! Looks like a fine location to shoot the next Metallica music video, doesn't it?! Anyways, totally awesome post, and have a Happy Valentine's Day! :-)

Amazing! Something rad must be shot there. You should make yourself its broker.

There used to be some of those mounds on the land that is now woodgate subdivision. My old neighbor said they were from the Civil War, but I've never heard any confirmation of that.

i've been to that store. i wish i had known about that church nearby, it's beautiful. the rebel citadel? that's fantastic. i love this post.

I wonder if those vultures could be nesting up in the belfry. Any smells of death going on in that church?

I would love to know where that church is? Any interest in disclosing its location? Thanks

did you see the creature behind the counter at the Pond Store. I've been going up there since childhood and I love pranking a newbie at the store. Beautiful country around there, albeit morbid history.

The silo looking thing is not the "Rebel Citidel" at Port Hudson. That would have been an earthwork, but it doesn't exist anymore, because when the Mississippi River shifted, it took the entire earthwork. I will find out what this is though and post again.

Vickie, I wasn't driving that day and most of it was unfamiliar, so the best I can tell you is it's on the way to the Pond Store (follow the link in the post) from the main highway in the St. Francisville area--110? And it's on the right side at the wooded edge of a big open field.

Mike, I did not see the creature of which you speak. Tell me more.

Daniel, funny, I was just thinking of the silo thing. My co-explorer that day provided a map printout labeling it as a citadel. So maybe it's a citadel, just not the Rebel one.

That church is on the road that goes to angola prison and tunica hills. It's on the right side of the road.

One time we passed there at night and the place was lit up with what looked like candles or lamps.

I HAVE to see that church! It's amazing!!!

Colleen,
I have passed that church many times and have been dying to get a close up look at it. Thanks for giving me a peek inside ! Wonderful photos !
Great shots of The Pond Store too !!

I am always so impressed with the classic design and details in your cards! I have to laugh when you say they are "simple!" Thanks for your attention to detail and sharing it with us! Happy summer!

Really, what we want now, is not laws, against crime, but a law against insanity. (Mark Twain, American writer)

I would love to know where that church is? Any interest in disclosing its location? Thanks

East and West Feliciana Parishes are loaded with old, hidden places like these. There is an abandoned plantation house near Greenwood Plantation and what looks like an old combination post office/store.

Since you are a big North and South fan, you need to see visit Greenwood Plantation where Ory Main rescues Madeline from Lamont.

The abandoned church is St. Mary's built in 1857. My great-great grandfather and his twin brother built the Pond Store and the attached home before moving to New Orleans (I am assuming they purchased the cash register too).

My mother's entire family is from that Woodville, St. Francisville, Bayou Sara and Baton Rouge area. I'm only amost 7 years late in finding this thread, but Mike I'm curious about the "morbid history" you referred to.