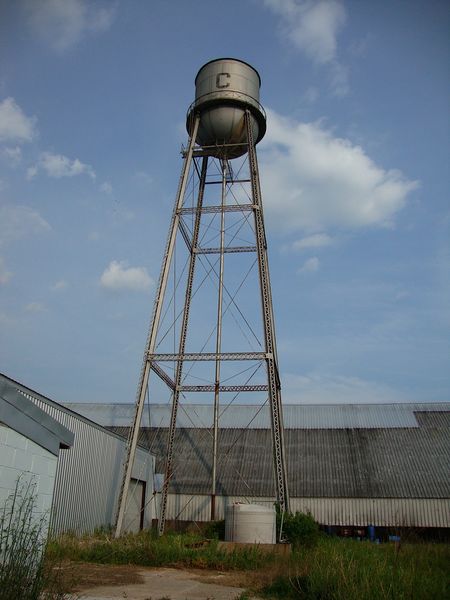 Apologies for the delay between posts. I was settling back to Brooklyn, procrastinating, freelance writing and looking for a steady job. (I am still looking, and very much hoping for good news about a recent job interview. Wish me luck!)

So! Where were we? In the first real post about Cinclare, we just finished up touring the main mill. But that still leaves numerous intriguing outbuildings and structures, so let's take a look at those. 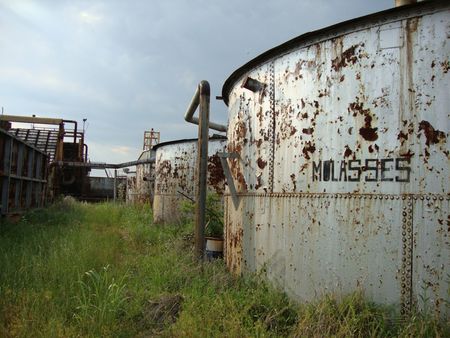 The photo below was taken inside the first molasses tank, which has been cut open for storage. 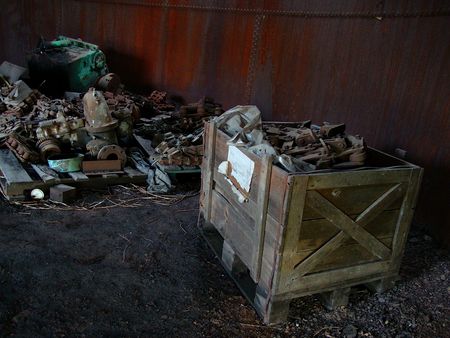 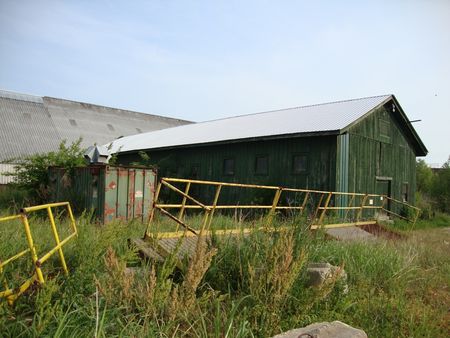 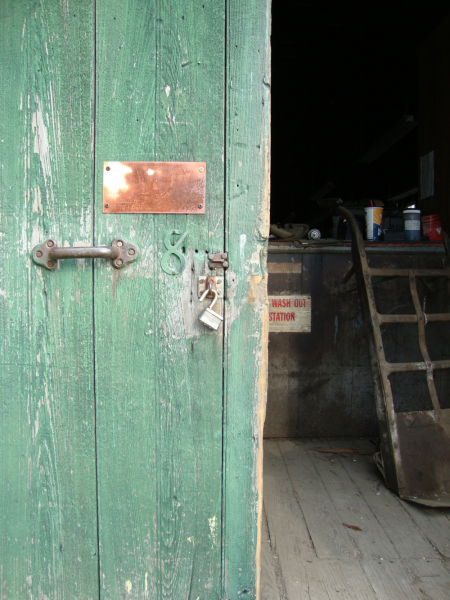 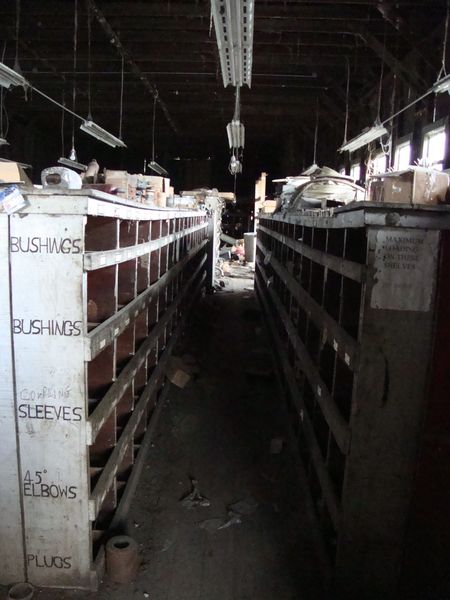 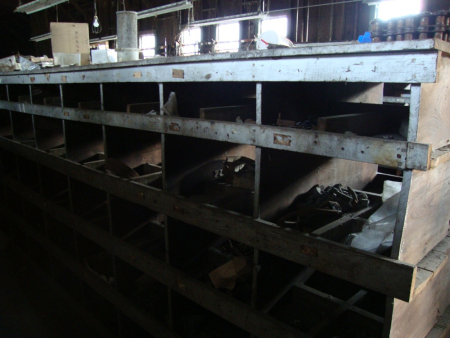 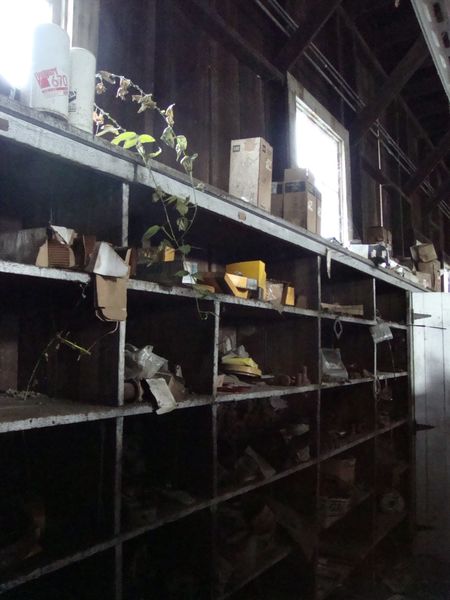 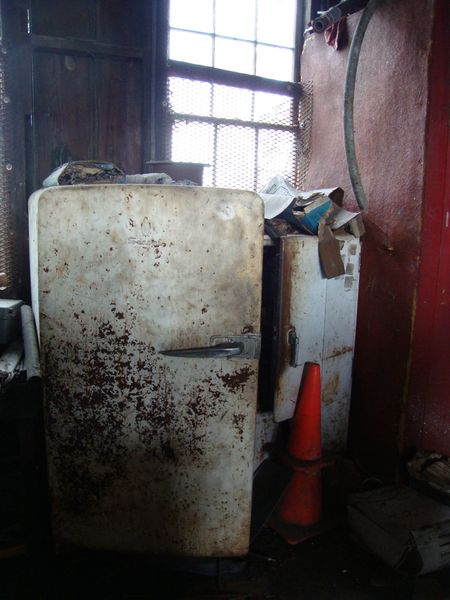 Nothing in the old fridge, but nearby, some mysterious tracks in the (indoor) sand. Possum? Nutria? 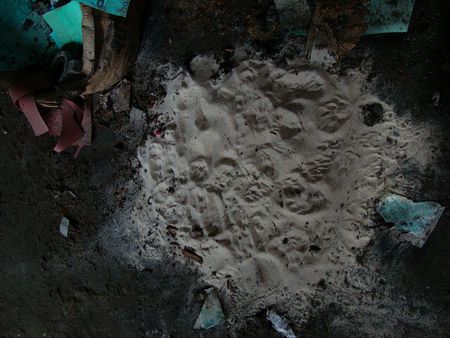 Now for the two front offices.

As with so many offices encountered in my abandoned travels, plenty was left behind, including files, books, and time cards. This one was semi-ransacked, more than semi-molded, and partly intact. 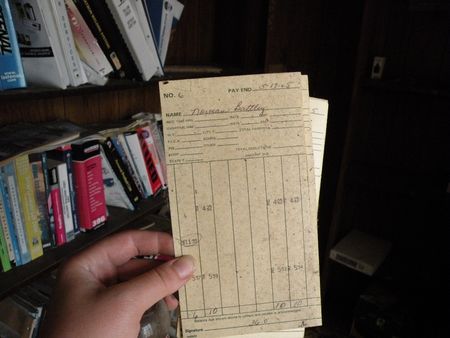 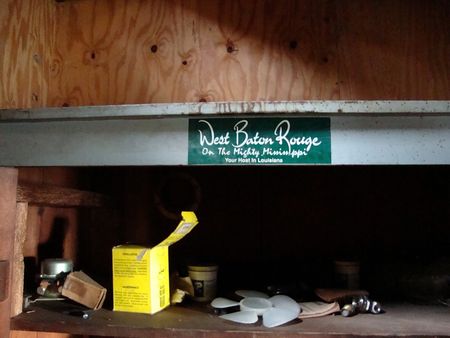 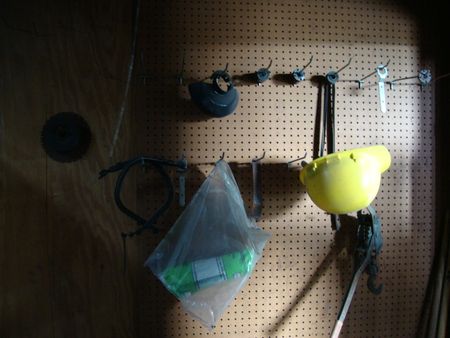 Below, a view back up to the mill, from whence we came. That arch-shaped patched-hole in the structure was cut to let out a tank that got sold off. 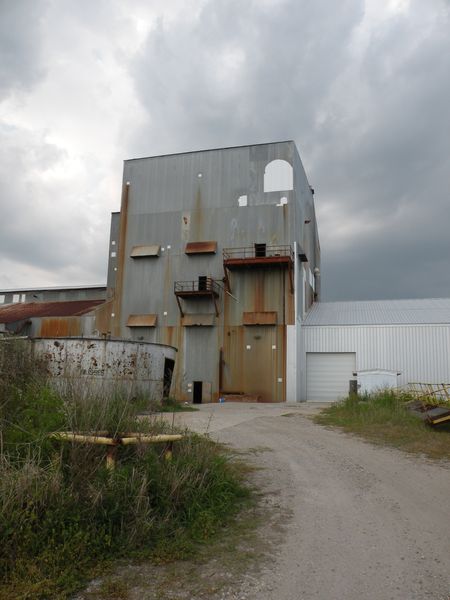 Castoff boots inside an open brick outbuilding which used to house a carpentry shop. 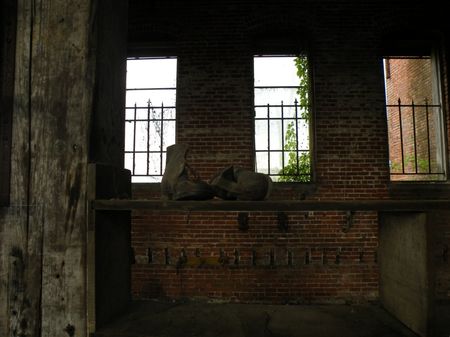 A wedding photographer was also inside shooting a just-married couple. Uh...romantic?

View from the brick outbuilding back to the mill. 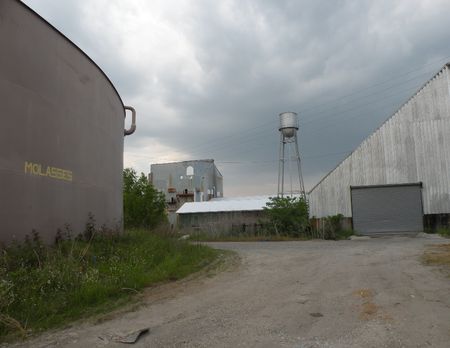 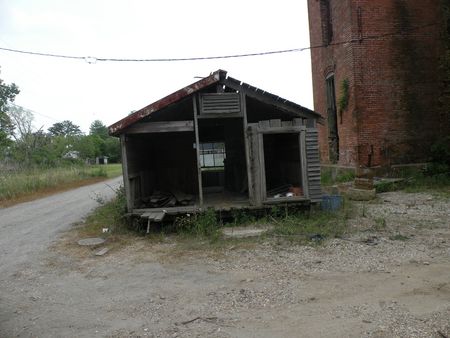 From that area, we headed toward the back. Behind the mill was a quaint residential street where some of the higher-up mill employees used to live.

There were also ditches with standing water, a perfect habitat for nutria. 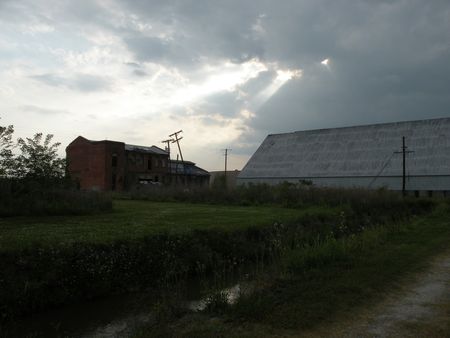 I'd been hoping to spot the ratlike invasive species nutria (our guide called them "nutra-rats") since I first learned of their existence after moving to Louisiana, but until this day at the mill I'd only seen lumps of ex-nutria along the side of the highway. Now was my chance. 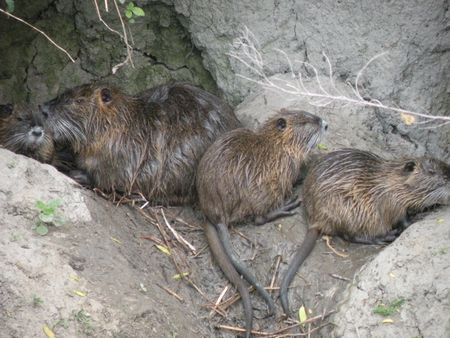 Would you look at that--right there is about $20 worth of nutria tails. 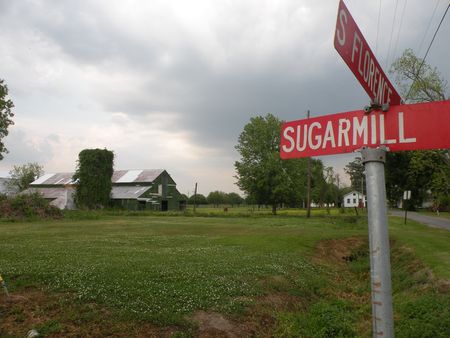 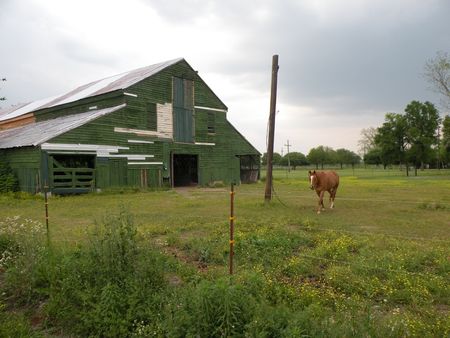 Our last stop was this green antique stable. It was not abandoned, and we made an equine friend who likes oaty snacks.

Well, I'm sorry to say that's the last of the fresh material I have for Abandoned Baton Rouge for the foreseeable future, since I no longer live in the region. However, I still have notes and photos for a post updating on many sites covered here on the blog, which will come next. Until then... 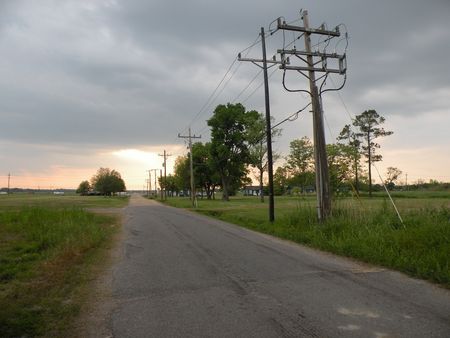 Glad to see you back.

Great pics (I love that green door!). I've only seen Nutria on YouTube vids prior to this ... they're weird little critters :)

Best wishes with your job search! Let us know if you start an abandoned project in NY!

The tracks were pretty jumbled up, but they looked like raccoon to me. If you notice the nutrias' hind feet, you can tell they're not nutria tracks -- you would have seen some really big back-foot tracks in that sand.

You know, there are mink in the rivers and bayous, too.

I just found your blog. I grew up there ('68-'83). So sad to see my old neighborhood in such disrepair. But thanks for sharing!

So glad to see you back. I wish you the best on finding a fun and rewarding job.

I'm really sorry to see this blog winding down. I grew up in BR from age 2 through 26 and have really enjoyed what you've done here. Your work has really meant something to somebody (me).

Y'know nutria have been spotted in way southern NJ. It's only a matter of time. I can't make heads or tails of your track photos but considering you have all those photos of nutrias, that would be a good candidate. Possum tracks have a crazy thumb and racoon tracks are sort of human-like.

That place just seems spooky in the way things were just left where they were and everyone left. All those files I'm sure someone took great care in ordering.

Why would someoone take wedding pictures there? Still trying to wrap my head around that one.

Glad to see you back; sorry to see you go. Enjoy Brooklyn, and best of luck with the job search. Thank you so very much for all the hard work you put into the site over the years, and especially for making these long afternoons working at my desk infinitely more enjoyable through your outstanding photography. Until I found your site, I thought I was the only one who saw the beauty in old buildings and structures that had been left behind, so thanks for making me feel a little less weird, too. You're awesome! :-)

I don't know why anyone would shoot wedding video there! Might need to check it out for creative exploration.

This could be evidence that the man is an inarticulate bufffoon. Instead, viewed from the frame of his position, the interviewer imputes - without evidence - “brilliant” thoughts to him, and commends his “cerebral manner“.

Y'know nutria have been spotted in way southern NJ.

we just finished up touring the main mill. But that still leaves numerous intriguing outbuildings and structures, so let's take a look at those.

with its English country house setting and impossible crime, is among her best books. For those who may feel that the "traditional" English house party mystery is too prone to using stereotyped characters, I can only say that the reader will encounter quite a few rather shocking surprises along the way, some of which will turn those stereotypes on their heads. "Envious Casca" is a great deal of fun, written with very dry humor, fairly clued. with some memorable characters. Don't let your own stereotypes of "romantic novels" put you off this book - it's a first-rate mystery.

The article is worth reading,Thank you very much! I will keep your new articles.

Awesome blog,really supllied with it.I have been looking for it since I was 9 years old.Thanks for sharing.

This is just the information I am finding everywhere.I'll make sure to follow up on your blog in the future.Thanks

I CAME UPON YOUR BLOG QUITE BY ACCIDENT. THANK YOU SO MUCH FOR THE PICTURES OF CINCLARE. MY DADDY WAS AN ELECTRICIAN THERE FOR ALL OF HIS LIFE, HE WORKED THERE FROM THE LATE 40'S UNTIL 1972. CINCLARE WILL ALWAYS HOLD A SPECIAL PLACE IN MY HEART. I LIVE IN PORT ALLEN, LOUISIANA. MY PARAN ALSO WORKED AT CINCLARE AND HE LIVED ON CINCLARE.

I really think you are well aware, and know how to make people listen to you might have to say. This blog is cool anyway missed. The great thing seriously. Please, please, stick to it!

Thanks a lot for the post! I was always sorta mesmerized by such places. Old fridge is creepy...

Pretty neat stuff. I remember this place from back in my consulting days around Baton Rouge working on engineering projects.