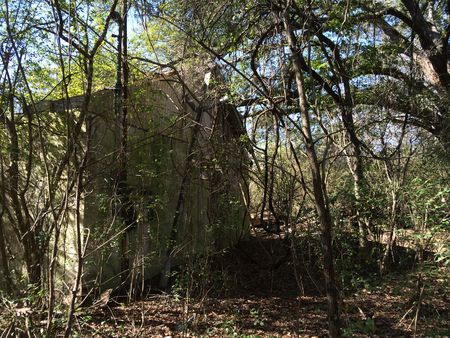 All we could spot from the road that ran behind it, through trees and underbrush, was part of a derelict building. At first, we weren't sure if this was the right place. 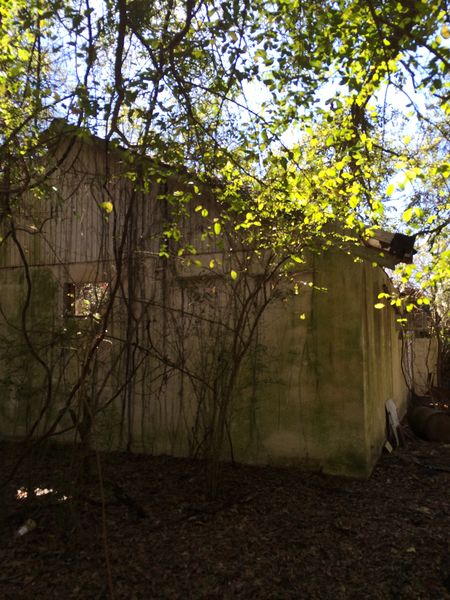 Then, approaching the door to that structure but outside, an light-up bar sign for "Budweiser Light," as it was called as a new beer in 1982. This must be it. 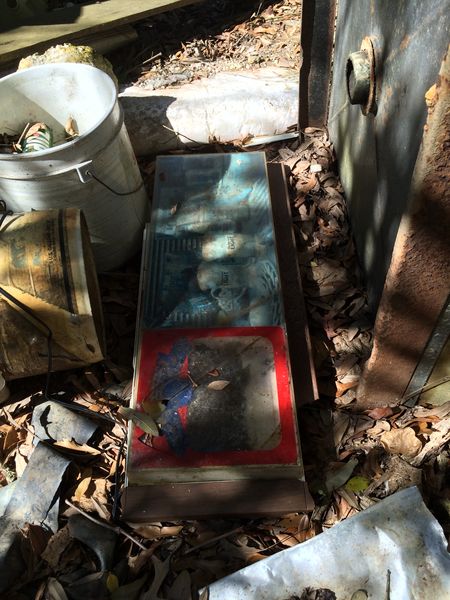 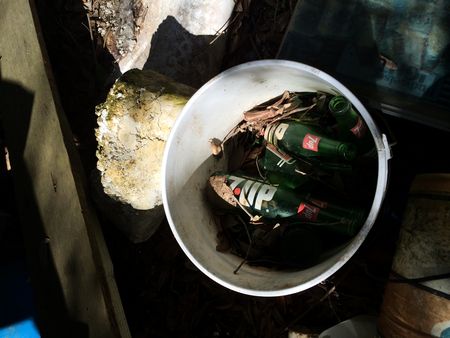 Here's the way in to the bar, not looking like it would have been very secure even when it was still open for business. 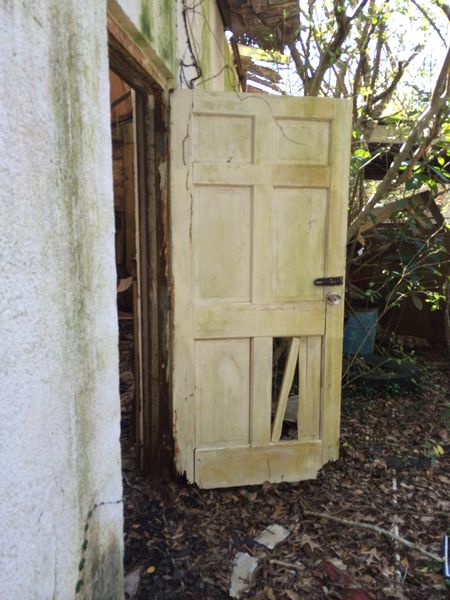 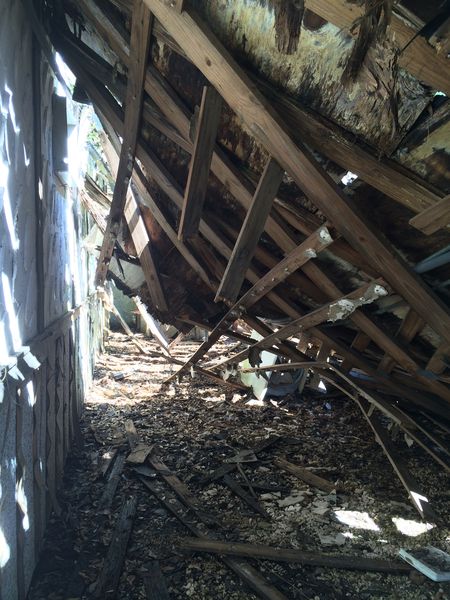 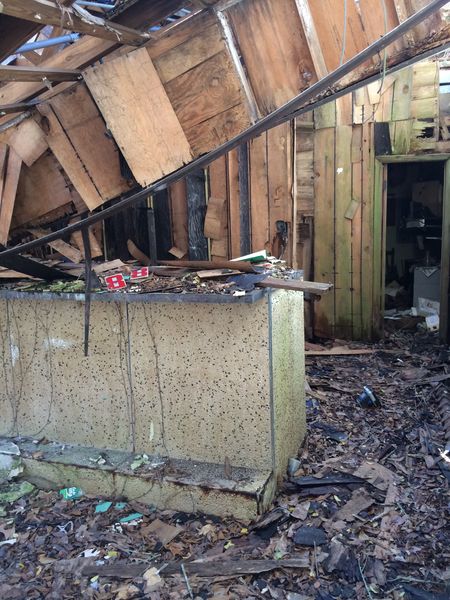 The last entries in a ledger found at the bar were in 1995, so the place must have closed around then.

(There was also a discarded can of Red Dog, The Official Beverage of Abandoned Baton Rouge™.)

How many lies were told on this pay phone, I wonder. 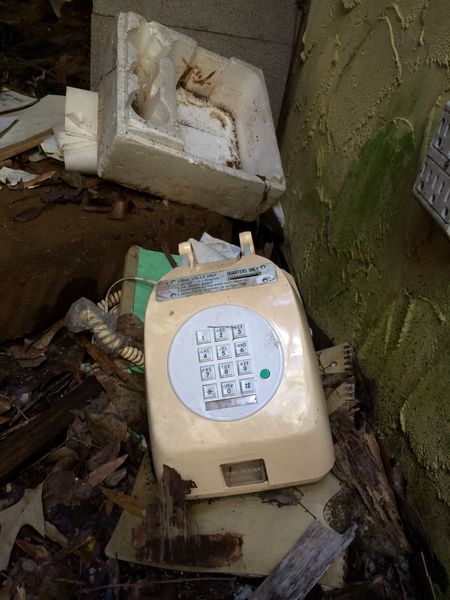 Here's the office (hold your breath). It's a depressing affair of stucco, unfinished wood, and cinder blocks, indicating a lodging offering 0 frills. 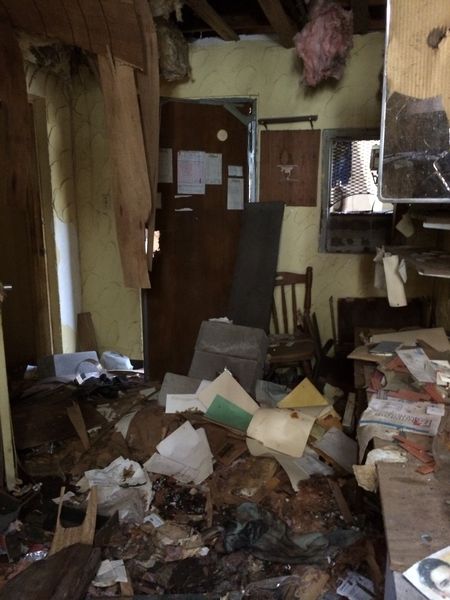 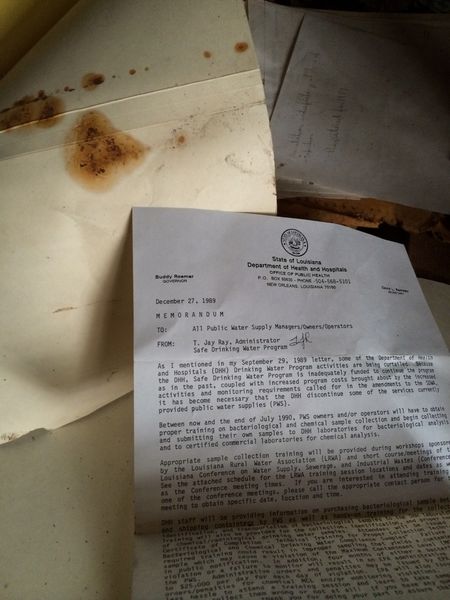 Imagine some AM Gold coming out of this radio. "Raindrops Keep Fallin' On My Head", maybe. 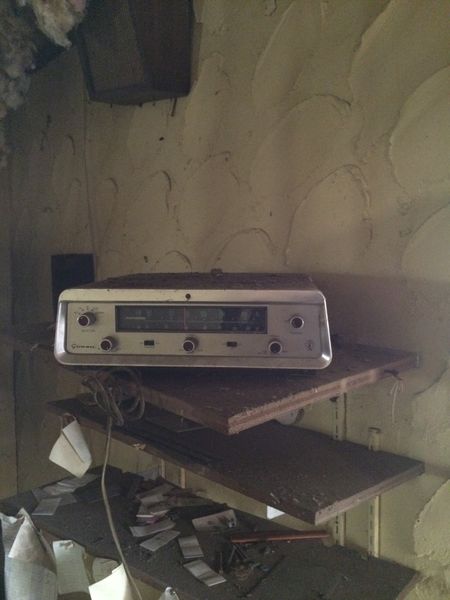 Exiting the office on the far end gave access to the guest rooms. And this shopping cart o' murderin' supplies. 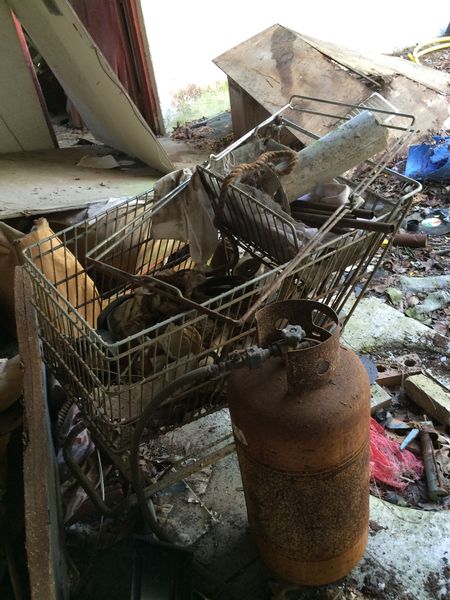 Here is the stretch of guest rooms. This housekeeping cart sure looks cooler as a rusted-out ruin. 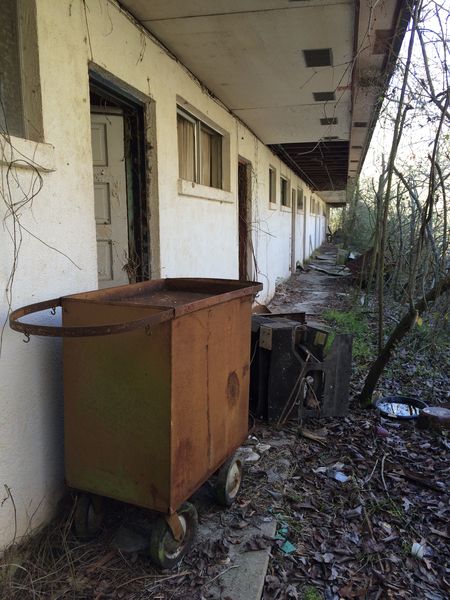 And some rooms with no view. 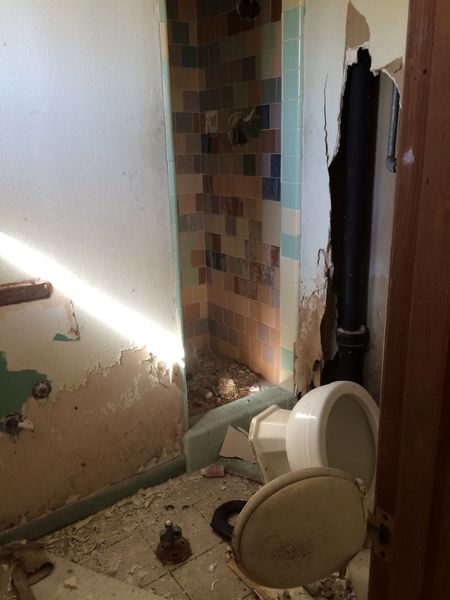 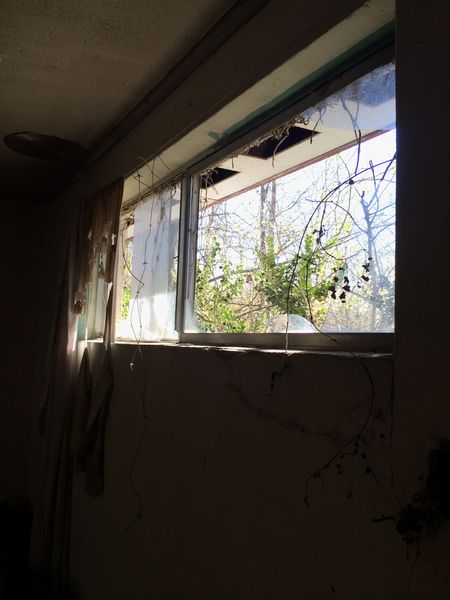 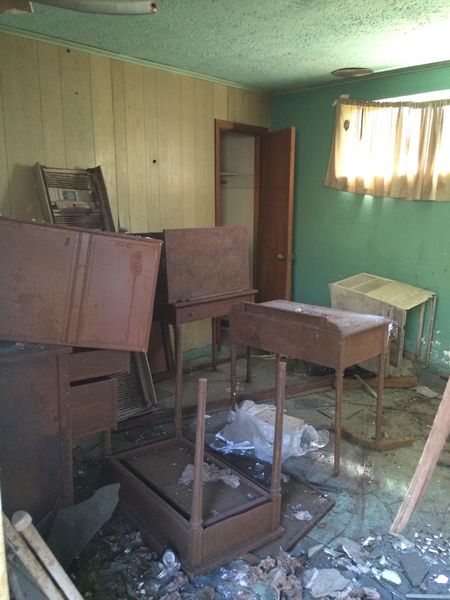 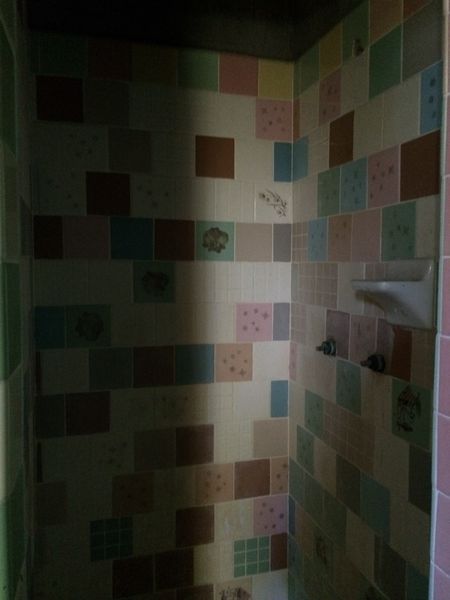 I think the bathrooms' tile selection speaks volumes about what type of establishment this was. In the rooms closer to the office, the tiles started out as assorted pastels--not matching in any way, but it was somewhat acceptable. Then the further down the line of rooms you got, the arrangements became progressively more outlandish. It's kinda, "ehhh, the tile store ran out of the solid-color remnants, so we'll just take this jumble of various patterns and slap them up there in whatever direction and call it a day" Then they congratulated themselves on a job quarter-assedly done and perhaps returned to the bar and cracked open a Schlitz. (Budweiser Light was not invented yet.) 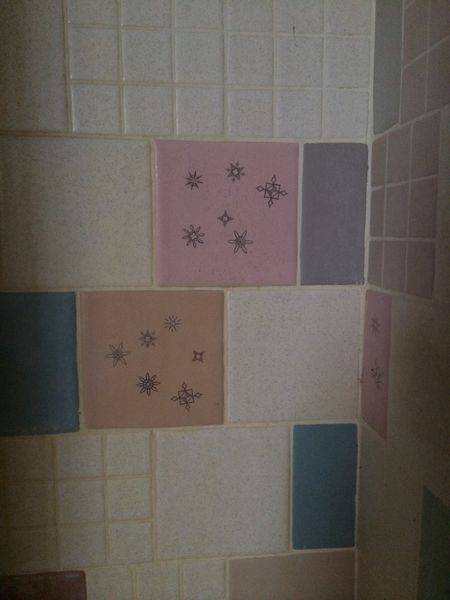 As we got near those last rooms, when we were also furthest from the car, a sound came through the woods, and the underbrush was too thick to see what was coming. But something was coming. It didn't sound large enough to be a person, but whatever it was also seemed intent on checking us out. Annnd that's why I didn't get to visit the last room or two. We headed back.

But I had to look more into the Watson's public areas before we left. Everyone was a little on edge, so it was only a brief peek.

This seems to be check-in. 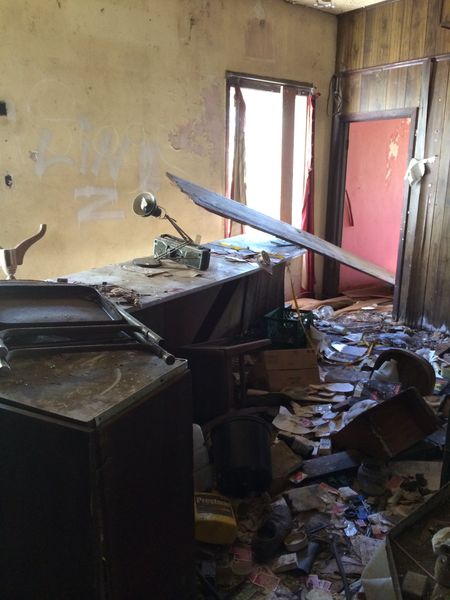 Beyond check-in, closest to Airline Highway, was this pink billiards room with jukebox. 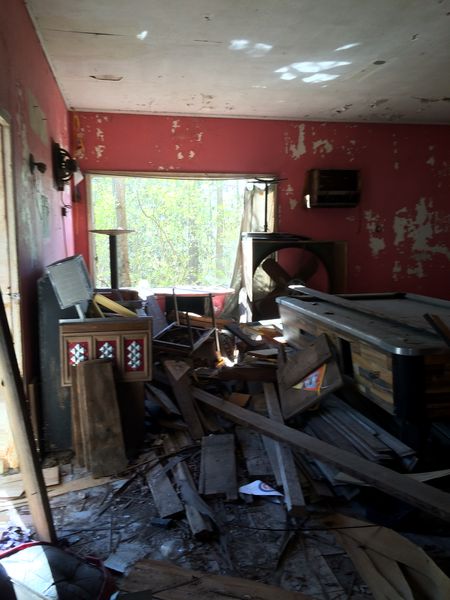 Turn back the other way and there's a small kitchen between the lobby and the bar. 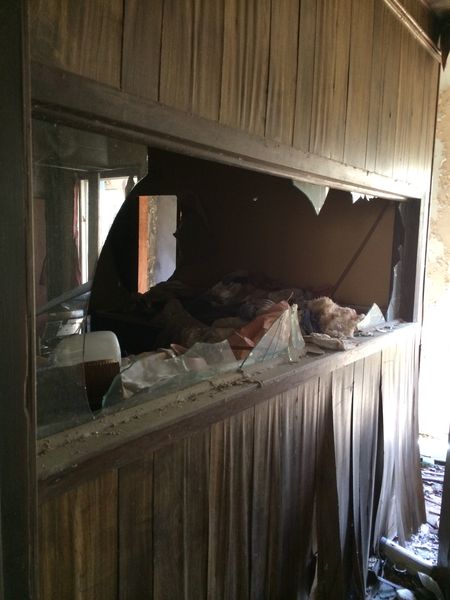 Back outsite, the brush was again too thick to really access the main entrance to the lobby, but it was and still is, flanked by palm trees. 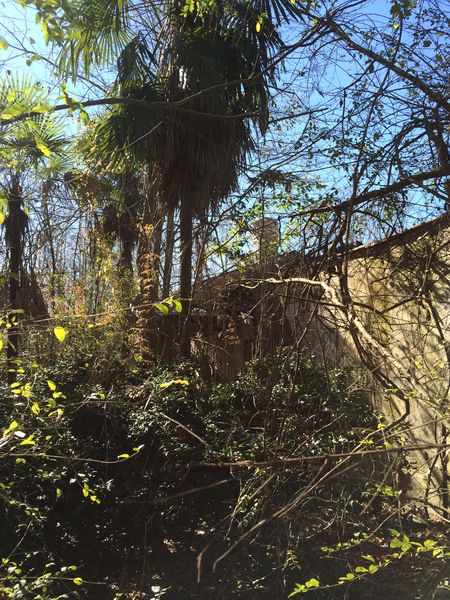 After the Watson, my small crew of three headed to two other sites readers have been mentioning on the ABR Facebook page. The Real Superstore (nothing new other than the parking lot is fenced in with some vehicles parked in it), and the Broadmoor Theatre, which has a date with a wrecking ball.

New to me at the Broadmoor site was that the old I.H. Rubenstein department store had been leveled and carted off. The formerly desolate, half-empty strip mall across the lot is now has a Hi Nabor supermarket.

The theater itself is still standing.

And the lobby is full of unrelated furniture. 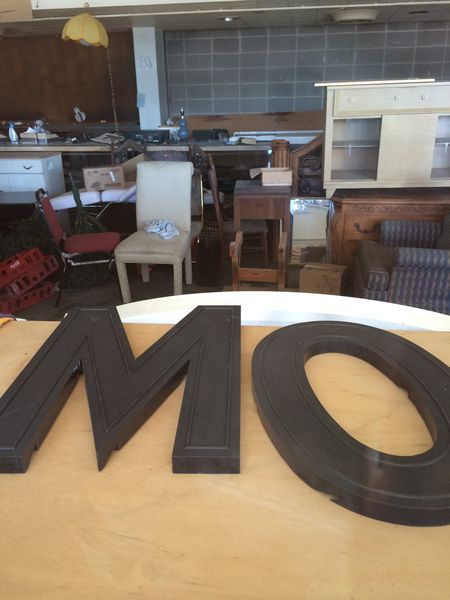 Note the Ghost poster, and in the hall to the right you see a poster for Friends With Money, a 2006 comedy-drama, and further back there's a poster for 1999's Random Hearts.

As we were leaving, a shopkeeper pulled up in a hot rod, and went into the little attached record store. I had to see if we might get inside. We went into the shop, asked about the theater, and I mentioned my blog.

"Oh, you're that girl who runs around and doesn't know what she's talking about."

...Except to be fair, that may have been me at the very beginning of this project, but that's not me now.

I guess what Record Store Guy was saying was he only knows my early stuff. (And does not like it.)

He told us some background on the owner of the theater vs. owner of the land, most which is detailed in this article, which makes it sound like the place will be demolished after August 2015.

Hoping to honor the many reader requests over the years, I had also tried to gain authorized access to the former dorms in Tiger Stadium, so I requested permission from LSU facilities staff (to whom I am still so thankful for allowing me to tour the Huey Long Pool with police escort). The Vice Provost gave this disappointing response:

The purpose of your blog is to document abandoned buildings in Baton Rouge, but the former dorms in Tiger Stadium do not fall into that category.   A majority of them are being used for storage, and Athletics is currently inventorying and investigating innovative ways to use the remaining space, so I cannot grant your request to access the rooms.

I respectfully responded that it's my blog and it is possible to y'know, state that these dorms aren't strictly abandoned while still featuring them (I believe you all could have handled this discrepancy), all the while trumpeting the worthy cause of adaptive reuse, but got no response.

What are you gonna do. I'm glad I got to explore someplace that was totally new to me, and I have to shout out to reader Stephen D. for giving me the heads up on the Watson Motel. This was a brief visit limited by the need to return the rental car in NO on time, so that's all I got for now, friends. As always, I intend to return to ABR whenever I can.

Also, I would love to hear any memories anyone has of the Watson Motel.

Love it. Used to live in Baton Rouge ... from age 5-9 — long before I was in to exploring abandoned locations. Thanks for posting!

So good to see you back, even if for just one location.

Cool article. I've worked down the street from the Watson for 12 years now. I pass it every day and sometimes I actually remember it's there. When I started here it used to be clearly visible yet still abandoned. I always wondered about it. Thanks for sharing your visit!

If this was the motel on Airline just before Highland Rd., it and the house next to it were torn down.

Lived in Baton Rouge my whole life till a few years ago and never knew about this hotel. Guess I never traveled that side of airline until the 2000's so never saw it. Saw this article while trying to pinpoint where the hotel was. http://www.225batonrouge.com/community/remembering-three-bustling-motels-airline-highway

When the vast amount of traffic moved onto the Interstates, the U.S. Highways slowly died off, as did the businesses along them. Look at the nostalgia for Route 66 that gets stronger every year. The Pixar feature Cars showed this clearly.